There's only one solution to the D.C. statehood issue. It's called retrocession. 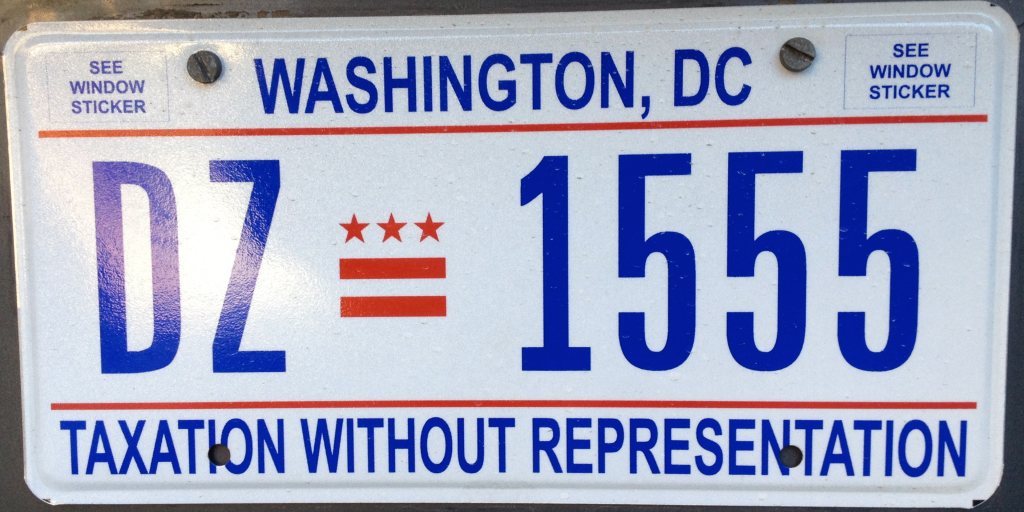 The Washington Post’s Charles Lane offers what seems like the only feasible solution to the issue of representation in Congress for residents of Washington, D.C.:

Of all the perennial structural issues plaguing American democracy, providing full congressional representation for the District of Columbia’s 700,000 residents must be the most maddening.

It is an anomaly both patent and easy, so easy, to solve. The answer is right there in Douglass County, Md.

To save you some Googling time: Douglass County is not a real place — yet. Rather, it is the new jurisdiction that would be created by returning the residential portions of the District to Maryland, a process known as “retrocession,” conceived by third-generation Washingtonian and policy gadfly David Krucoff.

The genius of Krucoff’s plan is to sidestep all the difficulties, political and constitutional, of creating a new state, or state equivalent, out of the District, and instead to simply allow its people to share the representation Maryland already has.

Retrocession could be accomplished by a combination of federal and state legislation, just as it was in 1847, when the federal government ceded the portion of D.C. south of the Potomac River back to Virginia. No constitutional amendment required.

As a large and influential new population center within Maryland, the people of Douglass County would have a member of Congress to look out for their interests, plus two senators, just as they would if D.C. were a state. Problem solved!

To discuss the matter with Krucoff, as I did over lunch downtown recently, is to experience the full conversational force of a Man With a Plan. Though he operates a real estate business, it is quickly evident that Douglass County is this intense 50-something’s true passion.

“Unlike some other crazy ideas out there,” he said, “this one is so clearly a good idea.” He certainly chose a clever name for his imagined jurisdiction — both an homage to Frederick Douglass, the African American abolitionist with deep personal roots in the District and Maryland — and a clever play on the city’s existing moniker. “D.C.,” get it?

For the past couple of years, Krucoff has campaigned 25 hours a week for Douglass County, including visits to 38 of the 40 Advisory Neighborhood Commissions in the District and lobbying various elected officials around the region.

One such pol smiled, looked him in the eye and, according to Krucoff, gently told him: “We’re not going to do this, David.” The dose of realism made no impact that I could discern.

Krucoff prefers to focus on the larger number of officials who, he claims, privately agree with him but don’t dare say so publicly. They are, in his phrase, “closeted retrocessionists.” Perhaps someday, if statehood keeps failing, they will come out.

The central objection to retrocession is that it fails to give voice to the District’s unique culture and interests. There’s something to that, but Douglass County’s 700,000 people would be dominant within a new Maryland congressional district and have a huge influence over the election of Maryland’s U.S. senators — not to mention having a large delegation in the state legislature.

Crucially, a Douglass County state’s attorney would replace the U.S. attorney in matters of criminal law, restoring local autonomy in that area as well.

As Douglass County regained control of prosecutors and courts, it could meanwhile shed multiple layers of bureaucracy — including the Department of Motor Vehicles, Metro and Medicaid — that the District currently maintains because it would no longer be individually responsible for those statelike functions. Maryland would take over.

Maryland has traditionally opposed retrocession for precisely that reason, but cost concerns are decreasingly credible given the District’s economic boom. Any burden of administering the needs of the District’s population, including its poor, could be offset by the huge increase to Maryland’s tax base from incorporating wealthy precincts such as Ward 3.

The federal government ought to be willing to grease retrocession by supplying transitional aid, possibly by reprogramming annual grants to the District.

Krucoff’s plan includes a neat diagram tracing the small, residual “federal city” — basically, the Mall, monuments, Capitol and White House — that would remain as “the Seat of the Government of the United States” called for in Article I of the Constitution.

Here are graphics from the website supporting the idea showing what would be “Douglass County, Maryland,” and what would make up the Federal District (which I suppose could retain the name “District of Columbia” or “Washington, D.C.” but which could also be renamed to something like the “District of Washington”: 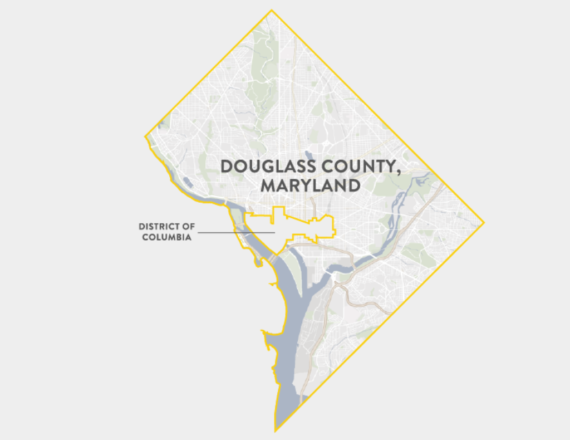 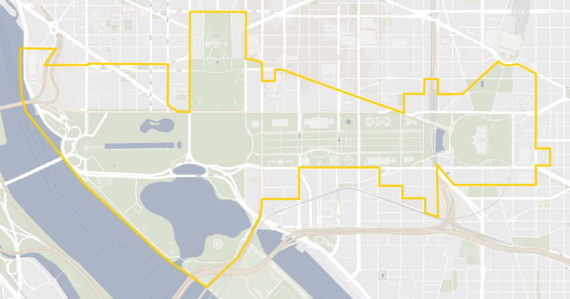 Retrocession would not be an unprecedented action, specifically with regard to the Federal District. When the District of Columbia was first formed during the Washington Administration, it included land from both Maryland and Virginia. However, it was understood at the time the Federal Government itself would be based in that part of the land made up of the portion of land ceded to the Federal Government by Maryland. The Virginia portion, meanwhile, would have presumably become land for residential and business development. Before that could occur, though, the Federal Government concluded that it did not need the land that Virginia had ceded for its contribution to the Federal District. As a result, in 1847, the United States returned Virginia’s portion of the Federal District. That area now includes the majority of Arlington County, which has become a metropolitan area all its own as well as the home to some 235,000 people and the location of employment for tens of thousands of more people. This is the area, for example, that includes what is presently known as Crystal City, which is where at least part of Amazon’s new HQ2 will be located. It also includes some parts of Alexandria, Virginia, one of the oldest cities in the area.

In theory, this is the same thing that could happen to the non-Federal areas of Washington, D.C. With the exception of the small area of the city where the Federal Government is located, none of which includes any residents other than the President and his family, the rest of the city would be returned to the State of Maryland where it would have its own Member of Congress who would have a vote on the floor of the Senate, and would be able to participate in the election of Maryland’s two Senators. It would also add at least one Electoral Vote to the total number of such votes that Maryland currently has. Additionally, as Lane notes, other advantages to the District residents in that it could save money on certain agencies that already exist in Maryland, such as the Motor Vehicle Commission and other similar departments. Of course, the most likely development is that most of these Washington, D.C. offices would simply change their name and that current employees would become employees of the State of Maryland. Additionally, Douglass County would, with 700,000 residents, become the fourth most populous county in Maryland, ranking behind Montgomery and Prince George’s County in what is now Suburban Maryland and Baltimore County.

All that being said there are several complicating factors, most of them political. A move like this would require the agreement of the governments of both the District and the State of Maryland Right now, politicians in the District are still hanging their hats on the dream of statehood and it would take some walking back to get them to support retrocession. Realistically speaking, though, statehood for the District of Columbia in and of itself is unlikely to happen any time soon. Such a move would require the approval of both the House and Senate, and there’s simply no way that Republicans are going to permit statehood, which would effectively add two permanent Democratic seats to the Senate. Additionally, as Dave Schuler points out in a post unrelated to Lane’s article that also basically endorses the idea of retrocession if statehood is granted to the District of Columbia, then what about every city with populations larger than the Districts? According to this list, that includes some 19 other cities ranging from New York City to Denver, Colorado. Are all these jurisdictions entitled to statehood too? Of course not. WIth retrocession, the citizens of the District of Columbia would get the Federal representation they are entitled to, and the absurdity of a city-state with equal representation in the Senate to California would be avoided.

The other complication could come from the state of Maryland itself, whose legislature would need to approve the retrocession of the non-Federal parts of the district. In that regard, one complicating factor could be the fact that adding 700,000 people to the State of Maryland would represent a significant shift of political power from the eastern part of the state, which primarily means Anne Arundel and Baltimore Counties to the southern parts of the state, where Douglass County, along with Montgomery and Pince George’s County, would form a significant power base that would likely represent a shift of power in the state. There would also be costs associated with retrocession, of course, but as Lane notes, Congress could kick in money to make up for that. There’s nothing Congress could do that would deal with this shift in political power, and this could cause legislators from other parts of the state to object to the idea.

As Lane notes, there’s also one other complicating factor, and it comes in the form of the 23rd Amendment. That Amendment grants the “District of Columbia” three Electoral Votes in Presidential Elections. If the population of Washington, D.C. were to become citizens of Maryland, this Amendment would obviously become moot, but it would still be on the books and would arguably still apply to the Federal District even though that area would not be comprised of any permanent residents other than the President. The easiest solution, of course, would be to repeal the Amendment simultaneously with the act of retrocession, otherwise, the President would theoretically at least end up with being entitled to three Electoral Votes all his own.

All that being said, retrocession is, in the end, the only realistic solution to the problem of non-representation for residents of the District. If we want to solve that problem, then we’re going to have to find a way to accomplish it.