A new poll finds that a majority of Americans oppose statehood for the District of Columbia.

A new poll indicates that most Americans oppose granting statehood to the District of Columbia, throwing a cold bucket of political water on an issue that some Democrats have been pushing for action on for some time now:

A majority of Americans oppose making the District the 51st state, according to a new poll released Monday.

The Gallup poll found a clear majority of 64 percent don’t think the nation’s capital should attain statehood, compared to 29 percent who support the idea.

The poll comes as Eleanor Holmes Norton, the District’s nonvoting delegate, and city officials have been trying to build national support for statehood, framing it as a civil rights issue and arguing that the city’s 700,000 residents are disenfranchised because they lack voting representation in Congress.

Norton said the poll is valuable because it shows that most Americans are unaware that District residents lack representation in Congress.

She noted that the poll did not include the fact that D.C. residents pay the highest federal taxes per capita in the nation. “Yet every American agrees that taxation without representation, which led to the creation of our nation, is wrong,” she said in a statement Monday.

“The Founders, who went to war because they paid taxes without representation, did not intend for 700,000 taxpaying American citizens in the capital they created to be the only Americans left without a voice in their own national legislature,” Norton said. ” Taxation Without Representation was the rallying cry that founded this nation. It was unjust in 1776 and it still is in 2019.”

Norton has garnered a record number of co-sponsors, over 200, for legislation that converts most of the city into a state. A Senate version of the bill, introduced by Sen. Thomas R. Carper (D-Del.), has 33 co-sponsors.

The House Oversight Committee was set to hold a hearing on July 24 on D.C. statehood — the first House hearing on the issue in a quarter century — but Norton said Saturday it will be postponed until the fall, so as not to conflict with congressional testimony on the same day from former special counsel Robert S. Mueller III.

With Democrats in control of the House, statehood has had something of a moment, despite its lack of support in the GOP-controlled Senate.

The House passed a sweeping package of goals and values, including D.C. statehood, marking the first time in a generation that House leadership endorsed the issue.

Many candidates vying for the 2020 presidential nomination, including members of Congress, say they support statehood, too.

Gallup polled 1,018 adults in all 50 states and D.C. from June 19 to 30 on cellphones and landlines. The poll has a margin of error of plus or minus 4 percentage points.

The results of Gallup’s single question on statehood are in line with a 2006 Washington Post poll. That survey found 58 percent were opposed and 22 percent favored the idea, while 18 percent had no opinion.

However, when asked about specific rights that statehood would extend to District residents, Americans appear more amenable.

As the Gallup report on the poll also indicates that there isn’t a major demographic group where a majority supports the idea:

No major subgroups of Americans voice support for D.C. statehood. However, support is higher among left-leaning political groups than right-leaning ones. Self-described liberals (40%) and Democrats (39%) are among the groups showing higher support. Republicans (15%) and conservatives (14%) are among the subgroups least supportive. Thirty percent of independents approve of making D.C. a separate state.

Given Washington’s strong Democratic leanings, making it the 51st state would almost certainly add one voting Democrat to the House and two to the Senate, and that likelihood may underpin Republicans’ reluctance to make it a state.

There were modest party differences in 1992, when 24% of Democrats and 16% of Republicans favored making Washington a state, according to the Yankelovich survey.

Standard survey samples of 1,000 U.S. adults do not include enough interviews with D.C. residents to reliably measure their opinions on D.C. statehood. However, on a regional basis, support is highest in the East, which includes D.C. and the neighboring state of Maryland. Thirty-eight percent of Eastern residents endorse making D.C. a state, compared with no more than 28% in the other major U.S. regions. In addition to the East including D.C. and Maryland, those in the Eastern U.S. may be more familiar with the arguments for and against making D.C. a state than those living farther away from it.

There hasn’t been a poll on this issue in many years, most likely because Republican control of Congress meant the issue had been pushed to the side as one that anyone outside of Washington, D.C. really cares about. With Democrats back in control of the House, though, and the race for the Democratic nomination now in full swing, the idea is at least being discussed. That doesn’t mean that there’s any chance of it becoming reality, though. A bill that passes the House now would likely die in the Senate and, if the Democrats retake the Senate in 2020 and make another try at passing the bill then it would likely be blocked by a Republican filibuster. Given that, this is clearly an idea that is going nowhere fast. In no small part due to the fact that putting the District on an equal footing with the 50 states is simply absurd for the reasons I’ve discussed in the past.

All that being said, I certainly understand how District residents feel about the fact that they don’t have a truly equal voice in Congress and about the fact that, even though the District has its own government, Congress still has control over its budget and at least the theoretical authority to veto decisions made by the voters and the City Council. That second issue, of course, could be solved by passing legislation that gives the District control more control over District affairs and removes the ability to block measures that don’t directly implicate the Federal Government. As for the first, there are solutions other than statehood that would solve that problem easily

Since statehood is not a viable option for obvious political reasons, the best way for the non-Federal parts of the District, which is where the population lies, be returned to Maryland, which ceded the land for what would eventually become the national capital.

This process, better known as Retrocessiom would not be an unprecedented action. When the District of Columbia was first formed during the Washington Administration, it included land from both Maryland and Virginia. However, it was understood at the time the Federal Government itself would be based in that part of the land made up of the portion of land ceded to the Federal Government by Maryland. The Virginia portion, meanwhile, would have presumably become land for residential and business development. Before that could occur, though, the Federal Government concluded that it did not need the land that Virginia had ceded for its contribution to the Federal District. As a result, in 1847, the United States returned Virginia’s portion of the Federal District to the Commonwealth. That area now includes the majority of Arlington County, which has become a metropolitan area all its own as well as the home to some 235,000 people and the location of employment for tens of thousands of more people. This is the area, for example, that includes what is presently known as Crystal City, which is where at least part of Amazon’s new HQ2 will be located. The area that was returned to Virginia also includes some parts of Alexandria, Virginia, one of the oldest cities in the area.

In theory, this is the same thing that could happen to the non-Federal areas of Washington, D.C. With the exception of the small area of the city where the Federal Government is located, none of which includes any residents other than the President and his family, the rest of the city would be returned to the State of Maryland where it would have its own Member of Congress who would have a vote on the floor of the Senate, and District residents would be able to participate in the election of Maryland’s two Senators. It would also add at least one Electoral Vote to the total number of such votes that Maryland currently has. Other advantages to District residents include the fact that it could save money on certain agencies that already exist in Maryland, such as the Motor Vehicle Commission and other similar departments. Of course, the most likely development is that most of these Washington, D.C. offices would simply change their name and that current employees would become employees of the State of Maryland. Additionally, the newly added part of Maryland would become the fourth most populous county in Maryland, ranking behind Montgomery and Prince George’s County and Baltimore County.

There is, of course, a lot of work that would have to be done for retrocession to work. First of all, the people of the District of Columbia and their political leaders, who at the moment are still fixated on the idea of statehood no matter how unlikely that may be, are going to have to be convinced that this is the most viable solution to their “taxation without representation” problem. Second, since this plan would require the consent of the State of Maryland politicians and citizens would also need to be convinced that the idea would be beneficial to them. One potential argument in favor of the idea is the fact that the state would benefit from tourism into the D.C. area to a far greater degree than they already do. Another potential argument could be directed toward the political leaders in the suburbs close to D.C., who would see their influence in the state increased significantly with the addition of the District into the state’s population. Finally, Congress would need to approve the idea as well, but honestly that seems like the easiest of the three steps.

D.C. statehood isn’t going to happen. That much seems to be clear. However, there’s no denying that the representation issue for the more than 600,000 residents of the District of Columbia needs to be addressed. Retrocession is the most realistic way to solve that problem. 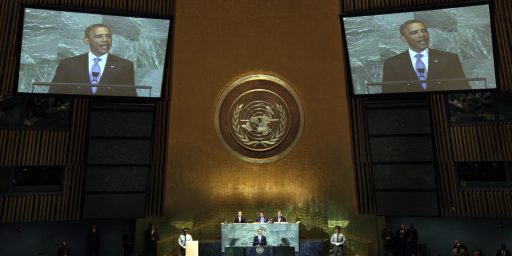 At U.N., Obama Says There Are No Shortcuts To Peace