There is a bit of a disjuncture between the terminology and the reality (but that does not excuse Trump's current actions).

As we assess Trump’s declaration emergency, it is important to know a few things.

First, declarations of emergency are not as uncommon as we might think.  For example, the Brennan Center for Justice has a list of Declared National Emergencies Under the National Emergencies Act, 1978-2018, a number of which are still in effect.  One will note that most (all?) of them fall into areas that we might not normally see as “emergencies” in the normal usage of the word.  We would also find that most of them are in foreign policy areas that we would likely think of as the domain of presidential power in the first place. My perusal of the list does not lead to any analog of what Trump is doing at the moment (i.e., seeking to subvert congressional will to get what he wants anyway, and in a way that allow him the spend money that congress would not give him, although there are some Reagan era declarations relevant to Nicaragua that might apply).

Second, it should be noted that the purpose of the National Emergencies Act was to curtail the president, not empower the office (nor did it create the concept).  Andrew Rudalevige, Professor of Government at Bowdoin College, explained last month at the Monkey Cage:

In 1973, the United States had been in a continuous state of emergency for four full decades — since 1933. The Depression, World War II, and the Korean War had all prompted such declarations; so had a 1970 postal strike and a 1971 international monetary crisis linked to President Nixon’s imposition of wage and price controls on the U.S. economy. During this period, Congress had delegated a wide array of powers to the president to meet various exigencies and had not bothered to repeal many of them — and thus nearly 500 discretionary powers were available to the president. A Senate committee examining the question in 1973 found ”this vast range of powers, taken together, confer[s] enough authority to rule the country without reference to normal constitutional procedures.”

The National Emergencies Act was passed in 1976 to reboot the system. It started by phasing out existing emergency powers and setting a one-year (though renewable) limit on future states of emergency. There remain more than 120 provisions in law that are on standby if needed. But under the NEA, presidents had to specify which powers, in which laws, they were activating (i.e., not all of them at once). Any ongoing emergency could be terminated at any time by Congress, which was supposed to regularly consider just that question.

He further notes that the statute has not necessarily worked:

efforts to constrain executive authority can sometimes legitimate it. The NEA and IEEPA fit into laws passed after Watergate and the Vietnam War that were designed to limit presidential unilateralism and regain for Congress a real say in questions of war and peace, spending and ethics. But the NEA and IEEPA, like the War Powers Resolution, the Congressional Budget and Impoundment Control Act, and the Ethics in Government Act, were what the legal scholar Gerhard Casper has called ”framework statutes.” They were laws designed not to solve a particular policy problem but to channel information and authority through new procedures and veto points. At the same time, they took presidential claims that used to be explicitly extralegal and gave them a new statutory grounding.

But to make such a framework work? That requires legislators to hold up their end of the bargain, and time after time, Congress has failed to enforce its own prerogatives. For instance, since the NEA’s passage, Congress has never rescinded a declared emergency. These days, it is hard to imagine that it could. The NEA originally allowed legislators to cancel emergency powers with a concurrent resolution — a legislative vehicle that does not require presidential signature to become effective. But a 1983 Supreme Court ruling said such measures were not legally binding. A 1985 amendment to the NEA fixed that problem — but by requiring presidential signature, which also means the possibility of presidential veto.

In simple terms:  the system needs fixing, as does the budget process that dates from that same era, but Congress has been unwilling, if not unable, to do so.

Third, as a piece in the Atlantic makes clear (The Alarming Scope of the President’s Emergency Powers), the President has access to a lot of emergency powers made possible by Congress:

As a result, the president has access to emergency powers contained in 123 statutory provisions, as recently calculated by the Brennan Center for Justice at NYU School of Law, where I work. These laws address a broad range of matters, from military composition to agricultural exports to public contracts. For the most part, the president is free to use any of them; the National Emergencies Act doesn’t require that the powers invoked relate to the nature of the emergency. Even if the crisis at hand is, say, a nationwide crop blight, the president may activate the law that allows the secretary of transportation to requisition any privately owned vessel at sea. Many other laws permit the executive branch to take extraordinary action under specified conditions, such as war and domestic upheaval, regardless of whether a national emergency has been declared.

I recommend the piece, although it does contain what I consider an extreme scenario for the 2020 elections.  Regardless, it does a good job of discussing the broad scope of powers that are at the president’s disposal.

I would conclude with noting that Trump’s current move strikes me as one that reminds me of presidents in Latin American who have been known to attempt to essentially legislate without the legislature (usually with some legal, or even constitutional cover).  I will note that this tends not to be good for either democracy nor governance. If you are going to have a separation of powers system, then the key separations (e.g., legislating and executing) need to be clearly separate, since that is largely how accountability is maintained.

A second observation is that Congress should fix these problems in theory, but in practice it can’t.  In theory, as I noted recently, the Congress should seek to protect its own prerogatives in opposition to the executive, but in reality partisan considerations short-circuits separation:

We are taught, correctly, that the US Constitution establishes a system of separated powers with three branches of government: the legislative, the executive, and the judicial. The first makes the laws, the second puts them into practice, and the third interprets their application.

In addition to this, we have a systems of checks and balances wherein each branch has some ability to encroach on the powers of the others.

As I have noted before, and no doubt will continue noting, the Framers of the US Constitution did not understand, nor anticipate, political parties as a central actor in representative democracy. Parties ended up affecting legislative behavior in ways not fully understood when the system was designed (and are a major reason why the Electoral College never worked the way they thought it would).

Parties are central to understanding why it is highly unlikely that the Senate will help to open the government unless Trump is on board in some fashion.

The existence of parties changes the basic logic of separation of powers in ways that are not usually taught in basic civics/American government courses.  We get told a tale of separated powers with institutional prerogatives but ignore the fact that parties are also institutions which can bridge the separations between executive and legislative.

The Republican controlled Senate has no interest in protecting the prerogative of the Congress, as Leader McConnell has clearly indicated.  Instead, he is seeking to protect his party leader (Trump) from political defeat and to preserve his party’s chances at retaining the executive in 2020.

I will note here, as I am wont to do, the unrepresentative nature of the Congress, and the fact the president was elected with second place support in the general populace, are both reasons why those in power have the incentive to behave as they do.  McConnell cannot hold onto power without a system in which the majority is denied proper representation in the federal government.  (If one is yearning for more on this general idea, see my post from November:  Speaking of the Popular Vote… as well as this one from October:  Rural v. Urban Representation and the Quality of Democracy). 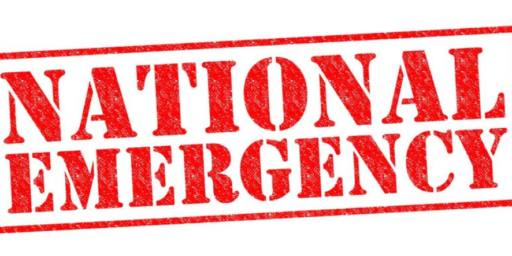