Instead of merely seeking to block the President's declaration of an "emergency" at the southern border, Congress should instead significantly amend the National Emergencies Act.

Earlier this week, Congress began the process of voting on a motion to disapprove President Trump’s declaration of a “national emergency” on the southern border as a means of getting funding for his border wall that was denied to him by Congress in the recent budget talks, a declaration that the President himself has admitted is entirely unnecessary. This declaration is being made pursuant to the National Emergencies Act, a law passed in 1976 that gives President broad authority to declare national emergencies based on conditions overseas or here in the United States. In the intervening years, Presidents from President Carter to President Trump have used this authority to declare emergencies related to a variety of events ranging from natural disasters and terrorist attacks like the September 11th attacks to international events such as the Iran Hostage Crisis and the general War On Terror that has existed since the September 11th attacks. Many of these emergency declarations remain in effect to this day even though the events that prompted them occurred decades ago. For the most part, Presidents have used these emergency declarations to make it easier to move resources or money into areas where it was needed quickly, but as a general rule the authority to declare an “emergency” is so broad that a President can do any number of things if he or she finds that there is an “emergency” situation.

In response to Trump’s declaration, we’ve seen responses in the legal and political worlds. Late last week, lawsuits were filed by California and fifteen other states, another filed by Texas landowners, a third filed by various environmental groups, and a fourth filed by the ACLU. and more lawsuits are likely to be filed. Additionally, Congress has begun the process provided in the statute to challenge the emergency declaration and it is expected that the House and Senate will vote on a disapproval resolution later this week, although it is unlikely that such a resolution will receive sufficient support to survive a Presidential veto. At that point, of course, it will be up to the Courts to deal with the matter. However, Law Professor Josh Blackman argues at Lawfare that, rather than voting on a resolution regarding the President’s declaration of a “national emergency” over his border wall, Congress ought to be looking at the legislation that makes what President Trump is doing possible.

The NEA can be improved. As a threshold matter, Congress failed to define the term “emergency.” Currently, it means whatever the president wants it to mean. While it is tempting to legislate in advance what types of dire circumstances would constitute an emergency, this approach would be a mistake. Dynamic threats to the homeland are changing constantly. It would be shortsighted for Congress to anticipate specific types of exigent circumstances that could justify a swift response.

A far better approach would impose meaningful limits on how long those powers can last. Specifically, Congress should look to the War Powers Resolution of 1973 for guidance. This familiar law limits how the president can respond to volatile military threats without a declaration of war. The president is required to notify Congress within 48 hours of introducing armed forces into “hostilities” abroad. Those forces can remain engaged for 60 days, plus a 30-day withdrawal period, unless Congress authorizes further engagements.

The War Powers Resolution’s track record is far from perfect. Presidents of both parties have turned linguistic somersaults to avoid the strictures of the law. (For example, the Obama administration determined that its military incursions into Libya did not constitute “hostilities.”) However, the resolution strikes the right balance: The president can unilaterally take action to respond to exigent threats, but that authority sunsets after three months. At that time, Congress would have to approve further uses of force. And though there have been long-standing doubts concerning the resolution’s constitutionality—specifically, presidents of both parties have suggested that the law may intrude on inherent Article II powers—that argument does not apply to domestic “emergencies.” On the homefront, Congress has plenary power over federal construction projects and similar expenditures. (Notably, Trump’s proclamation to build the wall did not rely on any power in Article II.)

If that model works for emergencies abroad, it would also work for emergencies at home. Congress should modify the NEA such that all emergency declarations automatically sunset after three months. At that point, the president would need to ask Congress for new authority to continue the emergency. This approach is far more desirable than the current system, in which Congress has to override a veto to halt the emergency. In other words, the burden should be on the president to seek permission, not on Congress to deny it.

Blackman is, of course, absolutely correct. While one can see a purpose for a law giving the President authority to act in the event of a true national emergency, the 1976 Act under which the President is acting here seems to give the President far too much discretion in determining what a national emergency is, and makes it far too difficult for to rein in that power once it’s been asserted. While it is important that a President be able to act quickly and marshal resources in the face of a natural disaster, international incident, or another event that may arguably constitute an “emergency” of some kind, the NEA clearly makes it far too easy for a President to abuse that discretion and assume powers far beyond those that Congress or the Constitution intended to grant to the Chief Executive. As a result, Presidents have used laws such as the NEA to assume more and more powers and, for the most part, Congress has until now done little or nothing to stop them or to place limits on that authority. If President Trump’s emergency declaration makes anything clear, it is that this authority needs to be reined in somehow and that Congress needs to assume more authority in this area.

Blackman’s proposal that Congress should look to the War Powers Act as a guide for how the National Emergencies Act can be improved upon is an interesting one, although it does have some rather obvious flaws. At the top of the list, of course, is the fact that the War Powers Act has done very little to actually place limits on Presidential assertions of authority to insert military forces into hostile situations abroad. More often than not, Presidents have either given the law lip service or simply ignored it on the theory that the law unconstitutionally interferes in the President’s authority as Commander in Chief of the Armed Forces. Additionally, Congress has done little to assert its authority under the act in the instances where Presidents have ignored it, such as the Libyan intervention in 2011, and the courts have declined to get involved in what they consider to be a political dispute between the Executive and Legislative Branches.

Notwithstanding those flaws, the suggestion that Blackman makes is an intriguing one that ought to be considered. Instead of simply being able to declare a national emergency with no conceivable end, his plan would provide that all emergency declarations would expire after a set period of time. After that, the President would need to apply to Congress for an extension of the emergency authority that he is seeking to assert. This would mean an end to the never-ending emergencies that we have today and would give Congress the ability to provide a check and balance against undue Presidential abuse of emergency powers. The law should also keep in place the current provisions that allow Congress to immediately move to nullify an emergency declaration that it believes to have no basis in fact. However, that would not be the end of Congress’s ability to rein in Presidential authority in this area.

There may be other ways to achieve this goal rather than what Blackman is proposing here, but this strikes me as a good starting point for a debate that is long overdue. 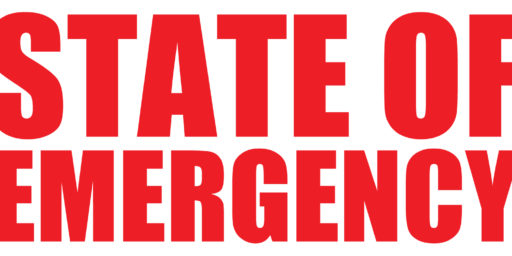