Another historic launch and return by SpaceX. 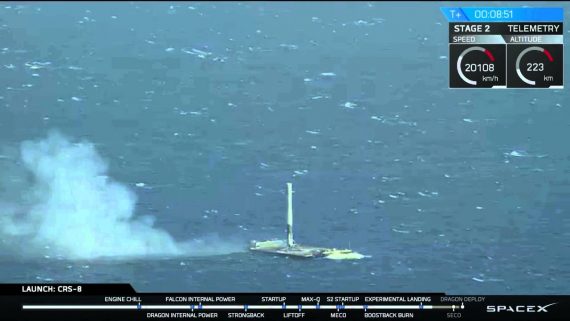 Elon Musk’s SpaceX pulled off another success yesterday with the launch of another Falcon 9 rocket into low-Earth orbit, where it sent a supply vessel on its way to the International Space Station, after which the rocket’s first stage successfully returned to Earth by landing on a remote controlled barge waiting for it in the Atlantic Ocean:

For SpaceX, the fifth time was the charm in the impressive feat of landing a rocket on a boat.

On Friday, SpaceX — more formally known as Space Exploration Technologies Corporation of Hawthorne, Calif. — launched a mission taking cargo for NASA to the International Space Station. While the capsule carrying 7,000 pounds of experiments, supplies and equipment continued to orbit, the booster stage of the Falcon 9 rocket turned around and headed back toward a floating platform off the coast of Florida.

SpaceX had attempted this maneuver four times before. Each time the booster stage reached the platform only to tip over and explode.

This time, the booster settled down on the boat, named “Of Course I Still Love You,” and remained upright, to loud cheers at SpaceX’s California headquarters and chants of “U.S.A.! U.S.A.!”

Elon Musk, the founder of SpaceX, has said reusability of rockets is crucial to reducing the cost of sending payloads to space. Both SpaceX and Blue Origin, another rocket start-up from another Internet entrepreneur, Jeffrey P. Bezos of Amazon, have made successful strides in landing rocket stages in the past half year.

This time they did it.

After several unsuccessful attempts to land an unmanned rocket on a football field-sized floating platform in the Atlantic Ocean, Elon Musk’s SpaceX finally pulled off the dramatic feat Friday afternoon in its first launch to resupply the International Space Station since its rocket exploded last year.

The landing, the first ever of a rocket’s first stage at sea, was heralded as a breakthrough for the burgeoning commercial spaceflight industry, and its leader, SpaceX.

“It’s another step toward the stars. In order for us to really open up access to space we have to have full and rapid reusability,” Musk said at a press conference afterwards.

The companies’ efforts to recover their rockets is part of what Bezos calls the “Holy Grail” quest of lowering the cost of space flight, which has been so prohibitively expensive that it has long been the exclusive domain of governments.

Typically, the first stages of rockets are ditched into the ocean after firing their engines for a few minutes and boosting a second stage, or a capsule, to space.

But if the commercial sector can build innovative rockets that can be reused, many think that would dramatically reduce the costs, a key step toward making space travel more routine.

SpaceX broadcast the launch and landing live on its website, where some 80,000 viewers watched the booster descend toward the platform. The first stage was hurtling toward space when it started a bit of aerial acrobatics, turning itself around and heading back toward Earth.

As it approached the platform, the booster was tilted into the wind but was able to right itself just before touching down, about nine minutes after liftoff. Crews were expected to board the ship and secure the rocket to the platform.

“It’s quite a tiny target. It’s like trying to land on a postage stamp there,” Musk said. “It’s like a carrier landing versus a land landing.”

At SpaceX’s headquarters, just outside of Los Angeles, employees broke out in raucous applause, as congratulations poured in from across the country.

Canadian astronaut Chris Hadfield and Buzz Aldrin, the second man to walk on the moon, tweeted their well wishes. “Opens the imagination to what is possible,” Hadfield wrote.

President Obama also tweeted his congratulations to SpaceX, saying, “It’s because of innovators like you & NASA that America continues to lead in space exploration.”

Musk’s ultimate goal is to colonize Mars, and his company has been gaining experience launching rockets under the lucrative NASA contracts it holds to fly cargo to the space station. Along with Boeing, SpaceX won a NASA contract to fly astronauts there by 2017, which would mark the first manned flights from U.S. soil since the shuttle was retired in 2011.

In its previous attempts to land on what SpaceX calls an “autonomous spaceport drone ship,” the rockets came close each time and hit the platforms. But each time they either crashed hard, or fell over and exploded. Musk said the company would test fire the returned rocket 10 times, and then if those go well, the company would launch the rocket on an orbital mission, perhaps as early as June.

The successful launch of the Falcon 9 from Cape Canaveral Air Force Station at 4:43 p.m. was the company’s first mission to the space station since June, when its unmanned rocket blew up a few minutes into flight. Since that catastrophic failure, SpaceX has flown three times, launching commercial and government satellites to orbit. But this was its first mission to resupply the International Space Station under its contract with NASA since the explosion.

SpaceX’s Dragon spacecraft is expected to rendezvous with the station Sunday morning. The spacecraft is filled with about 7,000 pounds of supplies and science experiments, including an expandable habitat.

As noted, this isn’t the first time that SpaceX was able to launch a rocket and successfully return the first stage to a predetermined landing area. The company accomplished the same task back in December when it launched another Falcon 9 with a cargo unrelated to the International Space Station and was able to return the first stage to a landing area on dry land. Jeff Bezos’s company has also accomplished this task three times over the course of the last year. What SpaceX has been unable to do until now, though, is to successfully return the first stage to a landing area at sea, with each of the previous attempt ending unsuccessfully until yesterday. This is what makes the accomplishment so significant, because the ability to return the first stage of the rocket to a location at sea essentially means that SpaceX would be able to launch from more than just the NASA launch sites that it has, to date, been using under agreement with the Federal Government. Additionally, of course, the ability to quickly refurbish and reuse first stage rocket components would significantly cut the costs of launches and create a real market in commercial launches for satellites and other material and, potentially one day, recreational trips into low-Earth orbit.

Obviously, a single success after several failures is only the first step in this project. It will take many more successful launches and returns to platforms at sea to turn this into provable technology, but this is a crucial step forward in the process and there may well be further failures along the way. Going forward, SpaceX’s next big project will involve creating a reliable method of delivering astronauts to the International Space Station, thus allowing NASA to bypass the need to rely on the Russians for the that part of our space program. That part of the program is apparently set to enter its next round of testing with a goal of having a usable manned version of the Dragon cargo vessel ready for testing by next year. This will be happening at the same time that NASA continues to develop its own next generation manned vehicle as part of a planned return to the Moon in the 2020s.

The ultimate goal of all of this, of course, is a manned mission to Mars, but it seems obvious that this is still something that is rather far off. For its part, SpaceX is still perfecting the delivery of cargo vessels to the ISS. Getting from there to launching a mission to Mars, manned or unmanned, is something that’s likely to take many years to say the least. For NASA, a mission to Mars would require perfecting a whole series of technologies, not the least of them being propulsion, as well as answering questions ranging from the impact of long term exposure to the radiation of space to the question of how a manned mission would survive on its own so far from Earth for such a long time. For the time being, then, Mars remains a long term goal, but not one that is realistically on the horizon in the coming decades absent significant technological breakthroughs. Notwithstanding all of that, accomplishments like this are a big step forward toward that goal and, well, also kind of cool to watch.

Speaking of which, here’s the video of the return of the SpaceX first stage to the drone ship:

And here’s the full video of the launch and return: