The legendary sportscaster Curt Gowdy has died at the age of 86, after a long struggle with leukemia.

Curt Gowdy, one of the signature voices of sports for a generation and the longtime broadcaster for the Boston Red Sox, died Monday at 86. He died in Palm Beach after a long battle with leukemia, Red Sox spokeswoman Pam Ganley said.

Gowdy made his broadcasting debut in 1944 and went on to call 13 World Series and 16 All-Star games. In 1951 Gowdy became main play-by-play voice on the Red Sox broadcast team. He left the Red Sox in 1966 for a 10-year stint as “Game of the Week” announcer for NBC. He was also the longtime host of the “American Sportsman” series.

“He’s certainly the greatest play-by-play person up to this point that NBC sports has ever had,” NBC Universal Sports chairman Dick Ebersol said Monday. “He literally carried the sports division at NBC for so many year on his back. … He was a remarkable talent and he was an even more remarkable human being.”

Gowdy was perhaps the broadcaster as television sports came into their own. As his Wikipedia entry makes clear, he broadcast just about everything imaginable:

Gowdy’s numerous network television assignments, first for ABC and later for NBC and CBS, ran a wide range of sports, earning him the somewhat derisive nickname of the “broadcaster of everything”. He called play-by-play for professional and collegiate football, covering the American Football League throughout its ten-year reign and continuing as a lead announcer after the AFL’s merger with the National Football League in 1970. Over the course of a career that stretched into the 1980s, he also covered Major League Baseball and college basketball; called 13 World Series, 16 baseball All-Star Games, 9 Super Bowls, 14 Rose Bowls, 8 Olympic Games and 24 NCAA Final Fours; and hosted ABC’s long-running American Sportsman series.

Being a member of the Hall of Fame for all three of the major American team sports is truly remarkable. 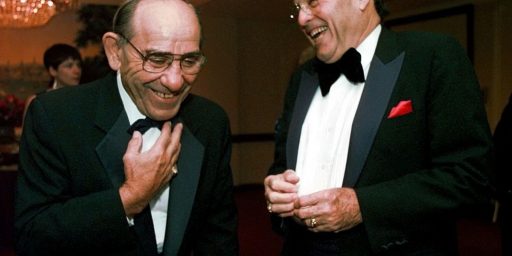