A former staffer for the House Select Committee investigation the attack in Benghazi is suing the Committee for improper employment practices, and Chairman Trey Gowdy for defamation. 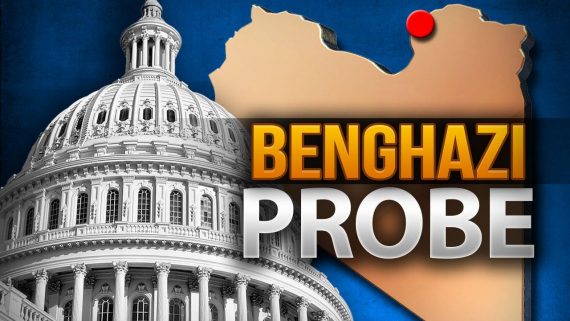 A former staffer for the House Select Committee investigating the attack on the diplomatic outpost in Benghaz, Libya who made news earlier this year when he alleged that he committee was unduly focused on finding information that damaged Hillary Clinton has filed a lawsuit against the Committee based on violations of Federal Laws related to employees who are in the military, and is also suing Committee Chairman Trey Gowdy for defamation:

A former investigator for the House Benghazi Committee filed a federal lawsuit against the committee Monday, opening a new chapter in legal skirmishes over the Benghazi attacks and subsequent investigations.

Last month, Brad Podliska, an Air Force Reserve major, alleged the Benghazi committee terminated him based on his military obligations and his refusal to advance an agenda targeting Hillary Clinton. Now, Podliska is detailing those charges in court in a new filing that alleges Committee Chairman Trey Gowdy broke the law by defaming him in their public battle over Podliska’s firing.

The suit cites Gowdy’s claim from a press release and an interview with NBC News, and argues it was a damaging line of attack, since allegations of such a “serious crime” have “ended the careers of many professionals in national security-related industries.”

But the charge was totally false, the suit says, because the information Podliska handled was drawn entirely from “sources from the Internet.” Podliska adds that the committee staffer who made the allegation later admitted the material “was not classified.” The committee has not withdrawn the allegation.

Suing Gowdy for defamation reflects a confrontational legal strategy, as Podliska is moving beyond the details of his termination – a largely staff-level issue – to directly impugning Gowdy’s conduct afterward. It also means that Monday’s filing goes further than expected, not only suing the Committee, but naming Gowdy as an individual defendant.

The filing emphasizes Podliska is not seeking money for the defamation claim. Instead, he is calling for a statement establishing that Gowdy’s allegation was false, and asking the Court to bar Gowdy from repeating it.

It is an unusual request against a member of Congress, given the wide legal latitude for legislators’ public comments, though the suit focuses on Gowdy’s role as an employer. Podliska’s complaint also seeks lost pay, benefits and reinstatement in his old job on the committee.

Gowdy and the committee have denied all of Podliska’s allegations, casting his suit as the selective complaints of a disgruntled former employee. Last month, Gowdy told NBC News’ Kristin Welker that Podliska’s criticism of the committee was a “lie,” that his work was “lousy,” and that the Committee’s top investigator was “a three star general,” undermining a claim of military discrimination.

Podliska’s experience has made him hard to dismiss, however, as a matter of both politics and law. He is a registered Republican, and he told CNN he plans tovote for the GOP next year.

Legally, his status in the military secures him a place in court that aggrieved House staffers don’t usually have. Congress passed “whistleblower” protections for most federal employees, but exempted its own staff in a self-interested loophole. Yet Podliska argues he is able to sue under The Uniformed Services Employment and Re-employment Rights Act (USERRA), a 1994 law that protects service members from employment discrimination.

Under the law, employees in government and the private sector are protected from any retaliation for their military duties. While one might expect employers to be deferential and careful regarding an employee’s service, Congress found that long or unpredictable reserve obligations sometimes result in a backlash against reservists.

That is the picture Podliska paints in his new filing – House staffers were upset he would be leaving the high-profile committee for over a month.

The suit states that when Podliska first announced a reserve assignment in Germany, Gowdy’s top staffer, Staff Director Phil Kiko, emailed back, “wow.” The suit says another committee staff was later heard questioning whether Podliska “really needs to go to Germany,” and alleges “a significant change in Kiko’s attitude and demeanor the moment [Podliska] returned from military duty.” According to the suit, this was when the situation broke down. Kiko no longer acted “cordially,” he singled out Podliska negatively, and tensions rose over what Podliska says was his refusal “to go along with the hyper-focus on Department of State and Secretary Clinton.”

So in Podliska’s theory of the case, his core legal reason for getting into court – military discrimination – is inextricably linked to the politically explosive charge that the committee was out to get Hillary Clinton. The suit presses that point by arguing:

“During the month that [Staff Director Phil] Kiko and [Deputy Director Christopher] Donesa began to treat Plaintiff differently, the Committee’s investigation changed significantly to focus on Secretary of State Hillary Clinton and the State Department, and deemphasize the other agencies that were involved in the Benghazi attacks and the aftermath of the attacks.”

Beyond the legal claims, the filing includes some other detailed accusations sure to draw attention in Washington.

The suit says Gowdy conveyed to staff that he thought his Staff Director and Deputy “were incompetent,” that senior Republican committee staffers regularly drank alcohol together in the “office during the workday,” and that a nonpartisan security staff member deleted documents to avoid detection by Democratic committee members.

As with any civil lawsuit, it’s important to remember that the allegations that the Complaint is making here shouldn’t necessarily be taken at face value and that this is merely the beginning of a legal process that may or may not end in trial. The next step in this case will be for the Defendants to file their responses to Podliska’s claims, and at least initially that is likely to mostly consist of arguments that he has failed to state a claim upon which relief can be granted. In the Committee’s case, the arguments will test the legal sufficiency of the argument that he was indeed subjected to unfair or improper treatment based upon his military service and apparent need to take time off to fulfill his Reserve obligations. One key point in that regard may well end up being the fact that Podliska was not in fact terminated because he left for Europe to fulfill his duties and that his termination came at some point after that, with at least the suggestion that his efforts to cloak his claims in a form that could form the basis for a lawsuit is essentially a ruse designed to avoid a quick dismissal of otherwise meritless claims. In the case of the defamation claim against South Carolina Chairman Trey Gowdy, a dismissal effort is likely to center on the Constitution’s Speech or Debate Clause, which provides Members of Congress and the Senate with broad immunity for things said in connection with their duties as a lawmaker as well as certain Federal Laws that provide Federal employees, including legislators, with immunity for official acts. Gowdy’s attorneys are likely to argue that to the extent the claims against the Chairman are based on his responses to Podliska’s accusations about the committee, they constitute official acts as a Member of Congress. Resolution of these pre-trial matters could take a year or more, at the least. Additionally, the defamation claim against Gowdy could be defeated by the defense of truth, but that is generally not a matter that can be resolved without going through extensive pre-trial discovery if not a trial itself.

Beyond the legal issues, though, the real import of this lawsuit strikes me as being yet another nail in the coffin for whatever view anyone may have had regarding the political objectivity of the Select Committee. Even before Podliska’s accusations had become public, the motives of the committee were already being questioned. As the time for Hillary Clinton’s long anticipated appearance before the Committee approached, the committee even came under attack from Republicans with Majority Leader Kevin McCarthy seeming to acknowledge the partisan nature of its mission even as he was purporting to run to replace John Boehner as Speaker, and New York Republican Richard Hanna saying the committee was obviously targeting Clinton. When Clinton finally did spend a day with the Committee in late October, that partisanship was seemingly confirmed, and polling at the time confirmed that this is how most Americans saw it as well. To the extent that his lawsuit brings to the public Podliska’s claims as a former staffer that he was being pressured to focus his efforts on Clinton rather than other agencies and officials that had a role in the events leading up to the attack, and its aftermath, is only likely to further tarnish whatever report the committee finally comes up with. 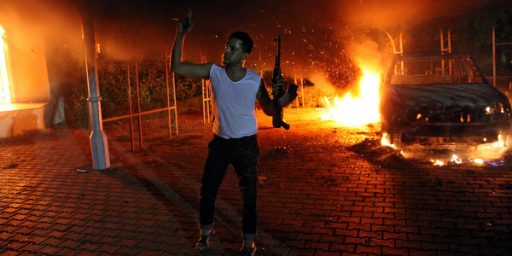