As impressive as Republican gains in this week's elections were at the national level, they were even more so in state legislative races. Which means Republicans are in position to consolidate and expand upon their recent gains.

Bruce Walker notes that, as impressive as Republican gains in this week’s elections were at the national level, they were even more so in state legislative races.   He points to this map from the National Conference of State Legislatures: 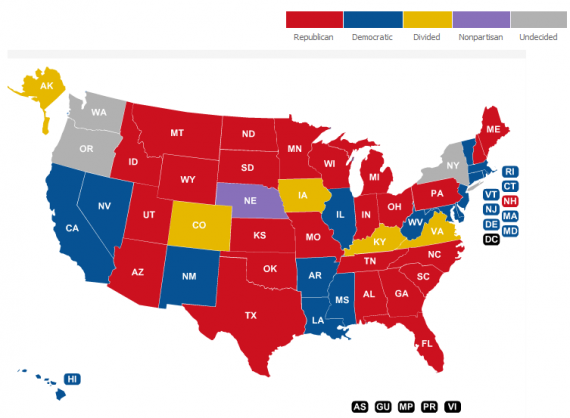 In those 6,115 state legislative elections, Republicans picked a net gain of 998 seats from Democrats. Republicans captured seats held by Democrats in a mind-boggling 16% of these races. A post-election map from Tim Storey at the National Conference of State Legislatures gives an eye-popping idea of the geographical spread of Republican control in state legislatures. Look at that map. Consider that there were no state legislative elections in Louisiana, Virginia, Mississippi, or New Jersey and that there was no election in the New Mexico Senate. If there had been races in those states, nearly all of America, except for the Northeast and the West Coast, would be red.

He’s got a lot more data at the link and Storey’s map is interactive, allowing you to burrow down into the state numbers.  But even the top level control of state legislatures by Republicans is rather impressive.

The reason it matters, of course, is that aside from being a feeder for future national level politicians, state legislatures are in charge of drawing and/or approving Congressional Districts after each decennial Census.  And we’ve just had one of those, so the legislatures that are about to take office will have a huge impact on who wins House races over the next decade.

The Census Bureau will deliver data to legislatures in early February. There are many caveats when it comes to redistricting especially given the legal complexity of the task and the inevitable litigation. But Republicans are in the best shape for the decennial linedrawing that they have been in since the modern era of redistricting began in the 1970s.

All legislative chamber switches in the 2010 election are going from a Democratic majority to a new Republican majority with one going from Dem to tied. That includes an historic win in the Minnesota Senate where Republicans will be in the majority for the first time ever, although the legislature was nonpartisan until 1974. In addition, Republicans now control the Alabama Legislature for the first time since reconstruction and the North Carolina General Assembly for the first time since 1870. As of now, Republicans appear to have added at least 19 chambers and that number could grow. The GOP gained 20 chambers in the 1994 election, and it’s not out of the question they will reach that milestone again this year with control of several chambers still up in the air.

So, Republicans are in position to consolidate and expand upon their recent gains.