In addition to gains at the national level and in Governor's races, the GOP also saw more gains in state legislatures around the country.

Though it has gotten less attention than the party’s victories in Senate races, House races, and races for Governor, last Tuesday also saw the Republican Party replicate another success it also achieved in the 2010 midterm elections with another round of wins in state legislative races cross the country:

DENVER — Republicans posted sweeping gains in state houses across the nation on Tuesday, taking control of the most state legislatures in nearly 100 years and approaching a record number of governors’ seats — a critical development at a time when most major policy has been coming out of states, rather than Washington.

With final tallies still being compiled, the Republicans now control both houses of the legislatures of 29 states, the highest number since 1920. By contrast, Democrats now control both chambers in just 11 states. The Republicans netted at least two governor’s seats — while holding off strong challenges from Democrats in places like Wisconsin and Florida — leaving the party with at least 31 governorships, the highest since 1998.

“It was a worst-case scenario for the Democrats,” said Tim Storey, an elections analyst at the National Conference of State Legislatures. “Republican voters turned out better, were more enthusiastic, they just swamped the Democrats. The anti-Obama mood was too strong even for many Democratic candidates who were well funded and had run equally active campaigns. In the state legislatures, the Democrats were overwhelmed by the environment.”

With the states acting as laboratories for legislation that cannot advance in Washington, policy changes are likely on a variety of issues. “What they’re going to do now is move forward a Republican set of policies — lower taxes and a focus on job creation,” Mr. Storey said. “It will be much harder to see expansions of Medicaid. And there may be fewer restrictions for gun owners.”

The results suggested a backlash by voters to what had been a record-high number of states under the full control of a single party, at least when it came to Democrats. Going into the election, Democrats held both houses of the Legislature and the governor’s seat in 13 states; that number has been reduced to seven, though a few legislative races are still being tallied.

“The voters have asked for divided government,” said Bruce Rauner, the Republican governor-elect in Illinois — Mr. Obama’s home state, where Democrats had held sole control of the state capital for more than a decade. “For the first time in many years, we’ll have a Republican governor and a Democratic legislature.”

In Minnesota, Gov. Mark Dayton, a Democrat, was re-elected, but Republicans took control of the state House, ending the Democrats’ two years of full control of the state capital. “I think what we probably learned is that Minnesotans believe that the Democrats overreached in the last two years — on taxes, on spending, and in other areas,” said Kurt Daudt, who had been the Republicans’ minority leader in the House.

Republicans lost the governor’s seat in Pennsylvania, a state that had been under single-party control before Tuesday. But they put two more states under their single-party rule. Republicans seized both houses in Nevada, the home state of Senator Harry Reid, the Senate Democratic leader, and a place that Democrats have viewed as moving in their direction. Brian Sandoval, the Republican governor, was easily re-elected. They also won the governorship in Arkansas, putting that state into the single-party control category.

Republicans will go into next year holding full party control in at least 23 states, the same as this year, though they could end up with 24, depending on whether they continue holding Alaska, where votes were still being tallied in the governor’s race. A rare bright spot for Democrats on an otherwise bleak night was that they kept Republicans from taking over chambers in Kentucky and Iowa.

In another measure of the shift in power, Republicans are poised to control 67 to 69 legislative chambers, up from 59 before the election, according to officials in both parties.

In sheer numbers, the Republican victories in state legislatures aren’t quite as impressive as the ones in 2010, but that’s largely because, as with the House races, the number of viable pickups was much smaller this time around and the undeniable Republican wave that we saw this year wasn’t quite powerful enough to sweep Republicans to victory in more reliably blue states such as California. Additionally, some states, such as Virginia and New Jersey, hold their state legislative elections in off years so they were off the table entirely. In those cases, redistricting that tends to protect incumbents in both parties in each state would seem to make the prospect of significant pickups unlikely, and the GOP holds a majority in both chambers in Virginia in any case thanks to victories in special elections that took place in the wake of the 2013 elections and retirements that have occurred this year, and it is expected ot hold those seats in 2015. In New Jersey, it is not anticipated that Republicans will score gains significant enough to grab control of either chamber of the state legislature.

Notwithstanding the fact that the numbers are smaller than in 2010, though, the victories are nothing to dismiss. As we have seen in the years since 2010, having control at the state legislative level gives Republicans significant opportunities to advance a conservative agenda in a way that even control of Congress won’t allow them to do. Through such control, they can advance bills related to everything from controversial topics like abortion and changes to election laws to other ideas such as education and tax reform that could potentially serve as guidelines for action in other states in the future. This kind of control is not without its downsides, of course, since we’ve seen Republicans nationally draw fire due to measures introduced at the state level regarding abortion rights and immigration. This has been especially problematic at times because state legislative elections often allow candidates who are far more conservative than someone who could get elected to Congress to use their office to push radical bills that end up getting national attention. An excellent example of this, of course, was the bill regulation abortion practices in Virginia that would have mandated transvaginal ultrasounds for all women prior to an abortion being conducted, a bill that even conservatives such as then Governor Bob McDonnell and Attorney General Ken Cuccinelli ended up publicly opposing. Another benefit that the GOP garnered from capturing state legislatures in 2010, of course, came from the fact that doing so gave them control over redistricting and Congressional District apportionment that, barring some extreme event, will likely guarantee that the GOP continues to control the House of Representatives through the 2020 Census and the next round of redistricting which would occur in its wake and take hold with the midterm elections in 2022. If the GOP manages to hold on to these gains, or even add to them going forward, then it could also help them going forward with the next round of redistricting in six years.

A final advantage that control of state legislatures gives the GOP going forward is that, in addition to serving as laboratories of democracy for policy ideas that may some day be implemented nationwide, it also serves as a potential proving ground for candidates for higher office. Several of the incoming members of the House and Senate, for example, came from the ranks of their respective state legislatures, with one of the most prominent examples of that being Senator-Elect Joni Ernst from Iowa, who had been elected to the Iowa State Senate in 2010 and served there from 2011 going forward before running for Senate this year. State legislatures have also been common sources for candidates for the House of Representatives. The more viable candidates the party has for these positions, the better off they’re likely to be in the future in campaigns for Congress and the Senate. It’s also worth noting, of course, that the current President of the United States started his own political career as a member of the Illinois Legislature.

Much of these gains could prove to be ephemeral, of course, and not every member of a state legislature is going to be a viable candidate for higher office, indeed many of them likely won’t be for various reasons. However, as with the gains at the Senate, House, and Gubernatorial levels, these gains in the state legislatures are likely to be good for the GOP going forward for some time to come. 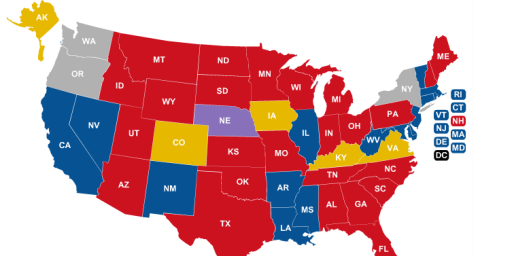