Via Jonathan Adler, I see that world-renowned economist Robert Barro and his student, Charles Redlick, takes to WSJ to summarize their research report showing that stimulus spending doesn’t work. Oddly, take cuts do.

The bottom line is this: The available empirical evidence does not support the idea that spending multipliers typically exceed one, and thus spending stimulus programs will likely raise GDP by less than the increase in government spending. Defense-spending multipliers exceeding one likely apply only at very high unemployment rates, and nondefense multipliers are probably smaller. However, there is empirical support for the proposition that tax rate reductions will increase real GDP.

Given that this comports with my own sense of how things work — and that Barro is sufficiently important that I was aware of him as a political science graduate student in the early 1990s — makes me somewhat confident in the results.  That they mostly relied on massive increases in defense spending during wartime, for reasons that are empirically sound but nonetheless muddy the research finding — detracts somewhat.

What’s interesting, though, is that public opinion seems to match up well with Barro and Redlick’s findings.  Kevin Drum points me to this chart from John Judis showing that most people think the stimulus helped large banks and Wall Street investment companies but not the little guy: I’m generally skeptical of asking ordinary people questions of this sort since they don’t have the training to make useful evaluations.  (Full disclosure:  Neither do I.)  Nonetheless, I both think they’re right in this case and, regardless, what they think will influence how they vote. 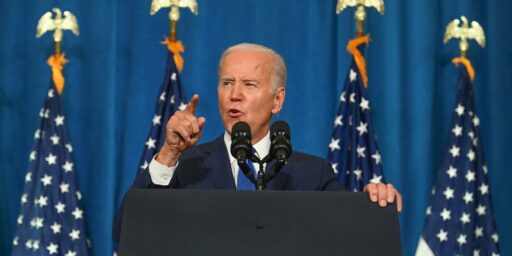