Is the West's string of luck about to end? 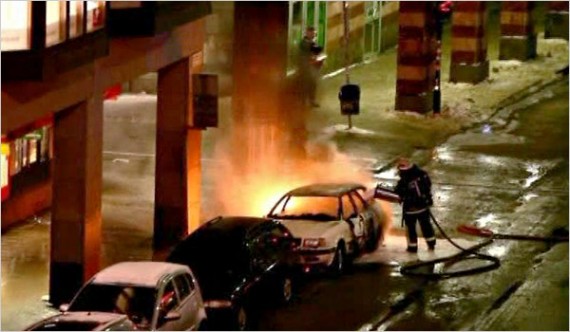 Sweden has been hit by an apparent suicide bomber:

One man was killed and two other people were injured when two explosions hit the heart of Stockholm’s city-center shopping district on Saturday evening, the police in the Swedish capital said. The country’s foreign minister called the blasts a terrorist attack, and an e-mail to news organizations minutes before the blasts seemed to link them to anger over anti-Islamic cartoons and the war in Afghanistan.

The police said that a car parked near the busy shopping street of Drottninggatan exploded first, shortly before 5 p.m. Stockholm time, and that the wreckage of the vehicle included gas canisters. A second blast followed minutes later, and about 200 yards from the first. A man’s body, with blast injuries to his abdomen, was discovered after the second explosion.

Swedish newspapers portrayed the dead man as a suicide bomber, and the newspaper Aftonbladet said on its Web site that he had been carrying pipe bombs and a backpack full of nails. But the police declined to confirm this. “We are in the middle of a technical investigation, and we are working methodically to find out what happened,” said a police spokeswoman, Petra Sjolander, who refused to speculate about whether the blasts were a terrorist attack.

Still, comments from Foreign Minister Carl Bildt on his Twitter account did not attempt to hedge the issue. His post read: “Most worrying attempt at terrorist attack in crowded part of central Stockholm. Failed — but could have been truly catastrophic…”

Indeed it could.   We’ve been lucky in two respects.  First, most of the terrorist attacks in the West since the 9/11 attacks — now more than nine years ago — have been spectacularly inept.  Second, we’ve thus far been spared by the classical suicide bombers of the type that have plagued Israel for something like a quarter century.

Given that the security measures needed to defend against the latter are so onerous that they’re intolerable in a free society — indeed, a society which would tolerate them for more than the occasional high value target could not reasonably be described as “free” — it’s only a matter of time.

More on the email:

Minutes before the explosions, a Swedish news agency received an e-mail that contained a call to arms to Muslim fighters and a threat to take revenge for Sweden’s involvement in the war in Afghanistan and for caricatures of the prophet Muhammad by a Swedish artist. The e-mail came attached with audio files in Swedish and Arabic.
“Now your children, daughters and sisters will die just like our brothers, sisters and children are dying,” the e-mail said. “Our actions will speak for themselves.”

The e-mail lashed out at Swedes for their “war against Islam,” for “denigrating the prophet” and for their “stupid support of the pig Vilks,” a reference to the artist Lars Vilks, whose drawings of Muhammad as a dog sparked controversy in 2007.

One hopes that the mass reaction to this is to double down in support of freedom rather than cowering at the thought of offending these fanatics.