A bomb blast in Oslo's government center has killed at least two people and a presumably related shooting spree at a nearby children's camp are being investigated as terrorist related. 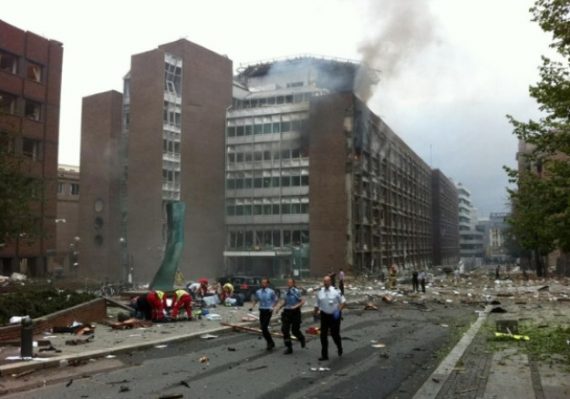 A bomb blast in Oslo’s government center that has killed at least two people and a presumably related shooting spree at a nearby children’s camp are being investigated as terrorist related.

The center of the Norwegian capital Oslo was a scene of devastation on Friday afternoon following a violent explosion which killed at least two people and injured several. Police confimed that the blast was caused by “one or more” bombs and urged people to leave central Oslo.

The explosion blasted windows out of buildings in the city’s government quarter. Prime Minister Jens Stoltenberg was safe, however, according to a government spokeswoman. The prime minister was not in the government building when the explosion happened.

“This is very serious,” Stoltenberg later told Norwegian TV2 television in a telephone call. He did not disclose his location, explaining that police has advised him against doing so, but said that all government ministers appeared to be safe. It was too early to say if the explosion was a terrorist attack, he said.

Several government buildings were damaged in the explosion, which happened at 3:26 p.m. local time and was heard for kilometers around. The Norwegian newspaper Aftenposten reported chaos in the streets near the site and people covered in blood. “It smells like sulphur,” one reporter at the scene said.

It seemed likely that the death toll would continue to rise. One reporter was quoted on the Aftenposten website as saying, “I saw dead people.” Senior Norwegian government official Kristian Amundsen told the BBC that people were trapped in the buildings affected by the blast. The situation was the worst his country had seen, he said.

Several terror experts have speculated that the blast could be the work of terrorists. “It is difficult to imagine this not being a terror attack,” said Norwegian terror expert Tore Bjørgo. “This is Norway’s greatest symbol of political power.”

Norway has faced several homegrown terror plots in recent years linked to al-Qaida. Last week, an Islamist cleric in the country was charged for making death threats against Norwegian politicians should he be deported from the country. There are over 400 Norwegian troops currently stationed in Afghanistan as part of NATO operations there.

Al-Qaida has long warned of a revenge attack in Scandinavia ever since a Danish newspaper published caricatures of the Prophet Muhammad over five years ago. In its propaganda, al-Qaida makes little distinction between the Scandinavian countries. There have been several attempted attacks against Muhammad caricaturists in Denmark. Last December, a suicide bomber with ties to radical Islamists blew himself up in the Swedish capital Stockholm, though nobody was injured in the explosion.

Television footage from the government quarter showed rubble and glass from shattered windows in the streets – smoke was rising from some buildings where fires were burning. The wreckage of at least one car was on one street.

All roads into the city centre have been closed, said national broadcaster NRK, and security officials evacuated people from the area, fearing another blast.

Mr Stoltenberg, in a telephone call to Norwegian television, said all government ministers were believed to be safe. He said he had been advised by police not to reveal his current location. “Even if one is well prepared, it is always rather dramatic when something like this happens,” he said.

Reuters said the oil ministry was among the other government buildings hit.

Oistein Mjarum, head of communications for the Norwegian Red Cross, said his offices were close to the site of the explosion. “There was a massive explosion which could be heard over the capital Oslo,” he told the BBC. “This is a very busy area on Friday afternoon and there was a lot of people in the streets, and many people working in these buildings that are now burning,” he said.

An NRK journalist, Ingunn Andersen, said the headquarters of tabloid newspaper VG had also been damaged. “I see that some windows of the VG building and the government headquarters have been broken. Some people covered with blood are lying in the street,” AP quoted her as saying.

The terrorist angle is simply speculative at this point but seems warranted. Elisa Mala and David Goodman for NYT (“Big Blasts at Government Buildings in Oslo“):

While Norway has seen little political violence in recent years, the country is a member of NATO alliance and has a small fighting contingent in Afghanistan. It was one of several countries cited by Ayman al-Zawahri, the Al Qaeda leader, as potential targets for attack. In 2006, Norwegian newspapers reprinted Danish cartoons that angered Muslims by lampooning the Prophet Muhammad. Norway has also historically been a frequent participant in peacekeeping missions and a host for diplomatic talks, including the 1993 Oslo Accords between Israel and the Palestinians. The Nobel Peace Prize is awarded by a committee of the Norwegian parliament.

A Norwegian security analyst, who asked not to be named, said the country has historically been seen as at low risk from terrorism, but cautioned that the nature of the explosion was still not known.

Three Norwegian men were arrested in July 2010 on suspicion of terrorism and were said to be a terrorist “node” in a larger global network, American counterterrorism officials said at the time.

John Drake, senior risk consultant at London-based consultancy AKE, said: “It may not be too dissimilar to the terrorist attack in Stockholm in December which saw a car bomb and secondary explosion shortly after in the downtown area. That attack was later claimed as a reprisal for Sweden’s contribution to the efforts in Afghanistan.”

NATO member Norway has sometimes in the past been threatened by leaders of al Qaeda for its involvement in Afghanistan. It has also taken part in the NATO bombing of Libya, whose leader Muammar Gaddafi has threatened to strike back in Europe.

Political violence is virtually unknown in a country known for awarding the Nobel Peace Prize and mediating in conflicts, including in the Middle East and Sri Lanka.

David Lea, Western Europe analyst at Control Risks, said: “There certainly aren’t any domestic Norwegian terrorist groups although there have been some al Qaeda-linked arrests from time to time. They are in Afghanistan and were involved in Libya, but it’s far too soon to draw any conclusions.”

But not, of course, to speculate. That’s all we have in the early search for answers. And there’s good reason to speculate in the direction of al Qaeda, which is in need of a win after months of setbacks.

There are now some reports that a Kurdish group affiliated with Al Qaeda has claimed responsibility for the attacks in Norway. From CBS News:

A group called “Helpers of Global Jihad” has taken responsibility for the bomb which ripped open buildings, including the prime minister’s office, in Norway’s capital, CBS News has learned.

It is apparently the same local shadowy extremist group that the Stockholm bomber in December 2010 had said he was connected to.

In the 2010 Stockholm blast, the bomb, in a backpack, went off prematurely and the bomber blew himself up. However, the bomber had left behind a video protesting the Afghanistan war and the killing of Muslims.

There is no confirmation that this group was indeed responsible. Investigators are also trying to determine if there are links to this jihadist group with the core al Qaeda organization. They are looking too to see if there may be a connection to three al Qaeda individuals recently arrested in Norway.

As the story says there is no official confirmation of this yet. This story is still breaking so we may yet get news that completely contradicts this.

UPDATE (James Joyner):  All indications are now that the youth camp shooter is a white, non-Muslim Norwegian. Police are, reasonably, operating on the assumption that the shooting spree and the car bomb are “linked.” So, the working assumption has shifted away from al Qaeda and other Islamist groups to either a lone wacko or some sort of Oklahoma City-type domestic conspiracy.

I took grief on Twitter this morning and early afternoon for being too cautious in not coming out and declaring “This Was The Work of Our Muslim Enemies.” It’s looking like, despite my relatively careful couching, that I was instead too forward-leaning.

Under the circumstances, it was perfectly reasonable to start with al Qaeda/Islamists/Jihadists as the working assumption. But every terrorist attack isn’t perpetrated by Muslims. There are plenty of other aggrieved maniacs out there willing to commit mass mayhem.