News that Norwegian terrorist Anders Behring Breivik was a fan of anti-Islamist sites, including Robert Spencer's Jihad Watch and Pamela Geller's Atlas Shrugs has opened a big can of schadenfreude. 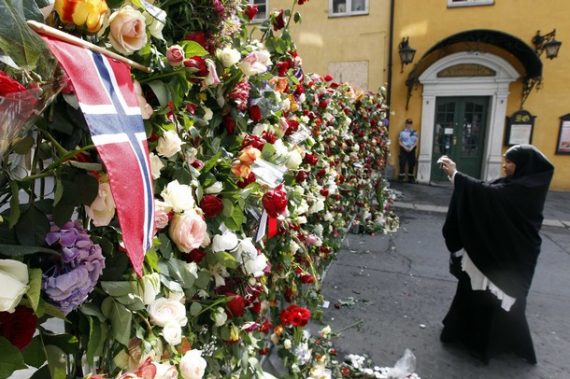 News that Norwegian terrorist Anders Behring Breivik was a fan of anti-Islamist sites, including Robert Spencer’s Jihad Watch and Pamela Geller’s Atlas Shrugs has opened a big can of schadenfreude.

Dr. Marc Sageman, a forensic psychologist and former CIA officer, told the New York Times that, while it would be unfair to blame the authors of these sites for Breivik’s crimes, their contention that Salafi Islam “is the infrastructure from which Al Qaeda emerged” applies to them: “they and their writings are the infrastructure from which Breivik emerged.” He added, “This rhetoric is not cost-free.”

Geller does herself no favors by calling the Times, NBC, and others as “the sharia-compliant media” and accusing them of “blood libel,” a phrase I’d hoped died in the aftermath of the Tuscon murders. For that matter, her question “Why doesn’t the media ever call out Islamic imams who really do incite to violence for their real calls to kill?” is absurd; these things are constantly reported, well known, and uniformly condemned in the civilized world.

But her larger point, that it’s absurd and outrageous to claim that calling out radicals is somehow a call to violence, is spot on. She tells The Daily Caller that “It’s like equating Charles Manson, who heard in the lyrics of Helter Skelter a calling for the Manson murders. It’s like blaming the Beatles. It’s patently ridiculous.”

For his part, Spencer calls Breivik a “disgusting neo-Nazi” who “epitomizes the disrespect for life and the contempt for humane values that terrorism embodies, and that we have dedicated our lives to resisting.”

Yes, there’s a certain karmic justice in the people who led the movement against the so-called Ground Zero mosque, on the basis that a free society can’t allow Muslims to worship at a place where the most heinous members of that religion committed murder in violation of its fundamental tenants, to feel what it’s like to be stupidly painted with a broad brush. As the Center for American Progress’ Matt Yglesias quipped via Twitter, “Anti-Muslim bloggers suddenly discover that collective responsibility is wrong.”

He points to Adam Serwer‘s Washington Post blog which begins, “American anti-Islam bloggers aren’t to blame for the Norway Massacre. But their response to the attacks is nonetheless revealing, in that they are now demanding the kind of nuanced analysis of the Norway shootings that they’ve always failed to offer when implicating jihadism or all Muslims for terror attacks.”

On Friday, anti-Islamist blogger Pamela Geller pounced on news of a massacre in Oslo. “Jihad in Norway?” she asked. She posted a second item—“You cannot avoid the consequences of ignoring jihad“—and linked to a previous one: “Norway: ALL Rapes in Past 5 Years Committed by Muslims.” As the Oslo body count grew, shepiled on: “if I hear another television or radio reporter refer to muhammad as ‘the ProphetMuhammad,’ I think I am going to puke. He’s not your prophet, assclowns.”

Then things went horribly wrong. It turned out that the suspected terrorist in Norway wasn’t a Muslim. He hated Muslims. And he admired Geller.

He notes, too, that the targets of Geller’s venom have issued the same sorts of condemnations of violence in the name of Islam as Geller has in the Oslo slaughter, to no sympathy from Geller.

Geller has pursued this line of attack most aggressively against Faisal Abdul Rauf, the imam who wants to build an Islamic community center two blocks from the site of the 9/11 attacks. Abdul Rauf, accused of radicalism by Geller and Republican politicians, has done everything possible to refute the charge. He has denounced al-Qaida as un-Islamic. He has said, “I condemn everyone and anyone who commits acts of terrorism. And Hamas has committed acts of terrorism.” He has invited the U.S. government to vet potential funders of his center. He has rejected the idea that Sharia overrides civil laws. And when U.S. forces killed Osama Bin Laden in Pakistan, the imam declared: “I applaud President Obama for his resolute efforts in the war against terror, including bringing Bin Laden to justice.”

Despite these statements, Geller continues to depict Abdul Rauf as a terrorist sympathizer. Her evidence is a series of secondhand, thirdhand, and nonexistent connections. “Rauf is an open proponent of Islamic law, Sharia, with its oppression of women, stonings, and amputations,” she asserts, falsely. He “was a prominent member of the Perdana organization, a leading funder of the jihad flotilla launched against Israel in 2010 by the genocidal Islamic terror group, IHH.” One of his books was supported by the International Institute of Islamic Thought and the Islamic Society of North America, which are “Muslim Brotherhood fronts,” and ISNA “was named an unindicted co-conspirator” in a “Hamas terror funding case.” Another Abdul Rauf book was promoted in Malaysia at a meeting of an organization that’s been banned in some countries.

So, perhaps there is some rough justice in the shoe being on the other foot. But the fact that a group is unreasonable in its interpretation of facts doesn’t mean we should adopt their intellectual framework in analyzing them. While doing so may be amusing and perhaps even instructive, bad reasoning remains bad reasoning. And, at the end of the day, Saletan refuses to engage in it:

The vindictive part of me wants to blame Geller and her ilk for what happened in Oslo. But then I remember something Abdul Rauf said: “The Quran explicitly states that no soul shall be responsible for the sins of another. Terrorism, which targets innocents who had no part in a crime, fundamentally violates this Quranic commandment.” That principle—that no one should be held responsible for another person’s sins—is the moral core of the struggle against terrorism. It’s the reason I can’t pin the slaughter in Norway on bloggers who never advocated sectarian violence. I just wish those bloggers, and the politicians who echo them, would show Muslims the same courtesy.

While, as a writer, I will never argue that words have no power, on the Internet talk is cheap and easy. It is simple—I would argue even lazy and ignorant—to be hateful and venom-spewing on the Internet. But as Breivik showed last week, it is actually very hard to take action on that hatred. Say what you will, but his entire modus operandi—a fake play at being a farmer, timing his manifesto’s appearance on the Internet right before his atrocity, using the car bomb in Oslo to distract from his merciless slaughter of children at summer camp— is that of a calculating mind taking great pains to make sure his destructive acts will have maximum impact. Breivik was a monster, but he was no amateur. And now, just as he wanted us to, we are obsessing over his every little thought, jot, and tittle.

In reality, no one really understands why they or anyone else behaves the way they do. Lots and lots of people—not just on the Internet but in Europe, and even within Norway — think and write things very similar to what Breivik thought and wrote. Across the continent, a pretty explicitly racist backlash against not just immigrants but Muslims immigrants is growing, and Breivik was active in that ideological community. Very few of them ever become violent in any way. Breivik may have come from the European anti-Muslim right wing, but he certainly does not represent it.

In order to tar all of Europe’s right, even just the upsetting xenophobes clothing themselves in worry about jihad, you must demonstrate a causal mechanism by which concern over cultural outsiders becomes murderous rage against the very people you claim to protect (in this case, ethnic Norwegians). Without being too trite, it requires an especially deranged mind already far outside the mainstream to decide to slaughter children at summer camp just because it is run by a left-wing political party. Associating that sort of mentality with the mainstream is not just wrong and lazy, it is hypocritical.

While agreeing that Breivik is ultimately fully responsible for his own crimes, Foreign Policy managing editor Blake Hounshell nonetheless argues that the “rhetorical milieu in which Breivik and other extremists swim deserves scrutiny.” On that much, we agree. The question is: to what end?

There’s a fine line, though, between arguing against bad ideas and calling for civility in our discourse and chilling honest and vigorous debate. There is legitimate reason to talk about things like immigration policy, militant Islam, and national cultural identity. To shut down that discourse because the likes of Anders Behring Breivik might commit outrageous acts of violence would not be “cost-free,” either.