Taking Notes on a Criminal Conspiracy

The Proud Boys, Trump family, and Alex Jones all filmed documentaries of their actions leading up to January 6.

WaPo’s Philip Bump points to a surprising finding of the January 6 committee in “The attempted revolution was televised — and recorded.” For younger readers, this is an allusion to a popular comedy song from the 1960s.*

The House select committee investigating the riot at the Capitol on Jan. 6, 2021, began its recent calendar of public hearings with two witnesses. One might have been predicted: a police officer at the Capitol that day who was assaulted by supporters of Donald Trump. The other probably wouldn’t have been: a documentary filmmaker named Nick Quested.

Quested was there because he was a witness to the actions of the extremist Proud Boys group in the days leading up to the riot and on Jan. 6 itself. The group gave him that access, agreeing to participate in the production of a film about its efforts despite its predilection for violence and lawbreaking. So the committee asked Quested to come and describe what he saw; in private, the committee reviewed the footage Quested and his team had captured.

Not for the first time, I quote Russell ‘Stringer’ Bell : “is you taking notes on a criminal fucking conspiracy?” Apparently, they went above and beyond in that regard. And they weren’t alone.

As it turns out, though, having a filmmaker follow you around and make a movie about you was not something that appealed to the vanity of the Proud Boys alone. On Tuesday, we learned that Trump himself was working with a documentary filmmaker named Alex Holder. In a subpoena obtained by Politico, the committee asked Holder to turn over any footage from Jan. 6 in which plans to overturn the election were discussed and any interviews with Trump, his family and former vice president Mike Pence.

In a statement, Holder said that he had turned over the compliant footage to the committee. The project began in September 2020, he wrote, with his team “simply [wanting] to better understand who the Trumps were and what motivated them to hold onto power so desperately.” Safe to say that the team was well positioned to explore that question.

CBS News’s Robert Costa spoke with people who had worked on Trump’s 2020 campaign and saw the filmmakers at the campaign headquarters. One told Costa that the project was “a family thing,” which would help explain why its existence was apparently not broadly known. The result is reportedly a three-part series on the former president that includes footage from Capitol Hill on the day of the riot.

Next month, filmmaker Alex Lee Moyer is expected to release a film called “Alex’s War,” focusing on the radio host and conspiracy theorist. Jones was at Trump’s rally outside the White House on the day of the riot and walked with Trump supporters to the Capitol, footage of which appears in an early cut of the film. At the Capitol, Jones briefly addressed the crowd with a bullhorn.

Speaking on a podcast last year, Moyer described being there with Jones.

“The scope of the movie is about Alex’s career. It’s not about his personal life. It’s not like tabloid-y,” she said. “It’s set against the backdrop of the fallout around the election.” She lamented that she had been identified at the Capitol by the site Jezebel as a potential protester since she “couldn’t spill the beans to everybody that I was there shooting this movie.” On Instagram that day, she posted a photo remarking that it was “the day we almost died but instead had a great time.”

Stupid is as stupid does. Regardless, Bump draws the obvious conclusion:

What makes the work of the known documentary filmmakers useful isn’t necessarily what they saw on Jan. 6 but what they saw on the days prior and following. The House committee doesn’t just want Holder’s footage from Capitol Hill; it wants to know what Trump et al. said at other points, too. Among Quested’s contributions to the probe was footage from a meeting between the Proud Boys and the right-wing extremist group Oath Keepers on Jan. 5. Who knows what Moyer might have been privy to.

Some of the most useful footage from the day, of course, was captured not by professional documentarians but amateur ones: the rioters themselves. Never before has a criminal event been so thoroughly recorded. For prominent participants, though, this impulse was simply outsourced. Trump’s team, the Proud Boys and Jones all wanted a record of what they were up to. They were just prominent enough that they didn’t have to live-stream to Facebook. They could have someone else capture it.

For multiple reasons I’ve stated before, I’m skeptical that Trump himself will face criminal charges. But the existence of a documentary of his actions in the weeks between the election and the riots would certainly seem to shift the odds a mite. 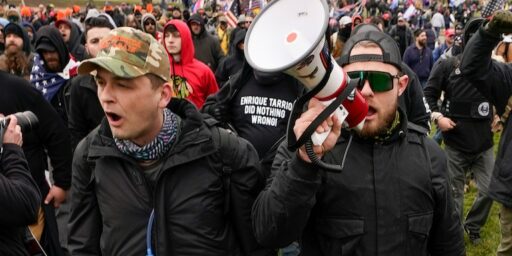