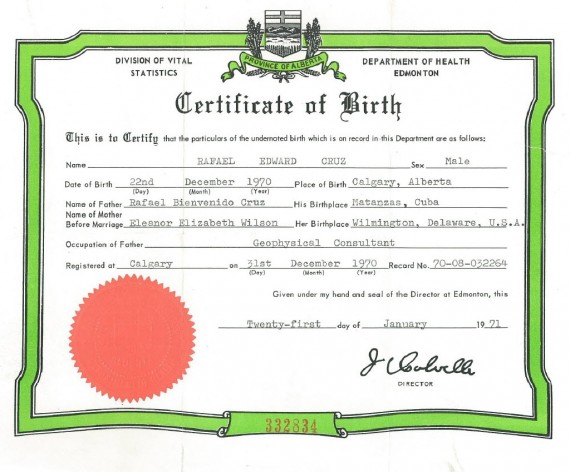 Just days after the release of his Canadian birth certificate, Ted Cruz has announced his Canadian citizenship:

Sen. Ted Cruz (R-Texas) announced Monday evening that he will renounce his Canadian citizenship, less than 24 hours after a newspaper pointed out that the Canadian-born senator likely maintains dual citizenship.

“Now the Dallas Morning News says that I may technically have dual citizenship,” Cruz said in a statement. “Assuming that is true, then sure, I will renounce any Canadian citizenship. Nothing against Canada, but I’m an American by birth and as a U.S. senator; I believe I should be only an American.”

The Dallas Morning News wrote in a story posted late Sunday night that Cruz likely remains a Canadian citizen, by virtue of being born there to an American mother. Having never renounced that citizenship, Cruz was technically a Canadian and an American citizen, according to legal experts.

Cruz said his mother told him that he could claim his citizenship if he ever wanted to, but that he never pursued it and thought the matter was settled.

Legal experts say that Cruz is a Canadian citizen regardless of whether he asked for it or not.

“Because I was a U.S. citizen at birth, because I left Calgary when I was 4 and have lived my entire life since then in the U.S., and because I have never taken affirmative steps to claim Canadian citizenship, I assumed that was the end of the matter,” Cruz said.

This isn’t entirely surprising, of course. A politician with dual citizenship is a bit of an oddity, after all. No word, though, on whether renounces Canadian citizenship includes promising never to listen to Celine Dion again.