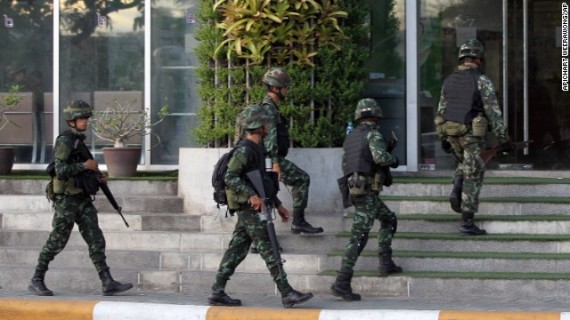 The military in Thailand has imposed martial law in the wake of a series of protests from supporters of a deposed Prime Minister:

BANGKOK — Citing a century-old law, the head of Thailand’s Army declared what he described as nationwide martial law early Tuesday and urged protesters who have paralyzed the government and blocked elections to “stop their movement.” The order also appeared to apply to pro-government demonstrators who are leading a separate protest.

In a country where the army has staged about a dozen coups, it was not immediately clear what degree of control the military planned to take this time. One politician called it the declaration of martial law “softer than a coup.”

Yet martial law gives the military potentially sweeping powers to maintain public order — “superior power over the civil authority,” according to the wording of the law invoked by Gen. Prayuth Chan-ocha, the army chief.

“The army intends to bring peace to the beloved country of all Thais as soon as possible,” General Prayuth said in a nationally televised speech broadcast at 6:30 a.m. “We would like to urge people from every group to stop their movement in order to quickly find a sustainable solution for the country.”

The military sought to convince the public that the army was not launching a coup. A message on a military-controlled television station Tuesday morning read: “We urge people not to panic. Please carry on your daily activities as usual. The imposition of martial law is not a coup d’état.”

In a power struggle that has pitted the Bangkok establishment against an ascendant political movement based in the provinces, politicians and analysts were waiting for signs whether the military would favor one side or the other.

“Right now it remains to be seen which path the military is taking, the choice is very clear,” said Verapat Pariyawong, a Harvard-trained lawyer and commentator, “either try to create a secured environment for election and reform, or to create a pseudo-legitimate process to remove the caretaking government and create transitional guarantees for the traditional elites.”

Thailand’s Constitution allows for martial law. But in his declaration on Tuesday, General Prayuth cited a 1914 law passed while Thailand was still an absolute monarchy. The law requires that a royal proclamation be issued before martial law is announced. General Prayuth did not say whether he had sought the assent of King Bhumibol Adulyadej, who is ailing.

In his speech the general cited “ill-willed people who created violence by using weapons of war” for his decision. More than 25 people have been killed in political violence since the protests began six months ago.

A separate statement issued later in the morning appeared to strip the government of some of its security powers. The statement said the government’s security unit, the Center for the Administration of Peace and Order, had been dissolved and replaced by a military-staffed organization.

A movement to oust the government has the backing of the Bangkok establishment and is seeking to put in place an appointed prime minister. Led by a former opposition politician, Suthep Thaugsuban, the movement has obstructed elections and is seeking the removal of the country’s caretaker government. Until now, the military has said it will not take sides between the protest movement and the caretaker government. But legal experts say the military has already chosen sides because it has a duty to take orders from the elected government.

The antigovernment movement has shut down government buildings and continues to occupy the prime minister’s office. The courts have issued numerous favorable rulings to the movement, including the removal of Prime Minister Yingluck Shinawatra earlier this month and an order barring the dispersal of the protests.

Earlier in the year, the government imposed a state of emergency using a separate law. It failed to quell violence and the emergency decree was withdrawn. Akanat Promphan, a spokesman for the antigovernment protest movement, posted a message on his Facebook page on Tuesday that protesters would “temporarily suspend our movement today” because of the imposition of martial law. But it was unclear if they would disperse.

Military involvement in politics is hardly a new development in Thailand, so in many respects this is nothing new. It is somewhat interesting that the King of Thailand, a figure revered by both sides in disputes like this, never seems to intervene at times like this, though

Why Is Thailand’s Military Coup A “Coup,” But Egypt’s Wasn’t?