Why Is Thailand’s Military Coup A “Coup,” But Egypt’s Wasn’t? 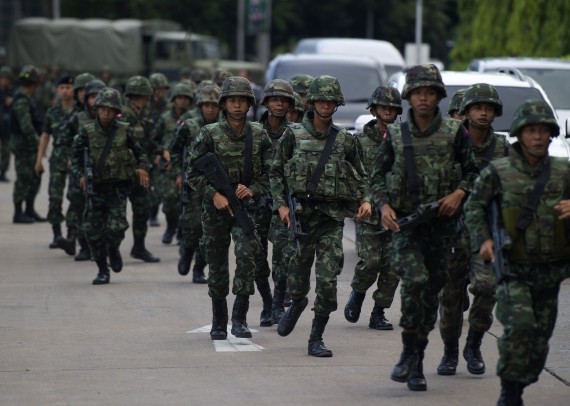 The Washington Post’s Adam Taylor notes a distinct difference between the State Department’s reaction to this weeks events in Thailand, and its reaction to remarkably similar events in Egypt nearly one year ago:

On Thursday, Secretary of State John Kerry released a sternly worded statement on Thailand’s military takeover, explicitly labeling it a coup. Here’s how it began:

“I am disappointed by the decision of the Thai military to suspend the constitution and take control of the government after a long period of political turmoil, and there is no justification for this military coup.”

That’s a remarkable contrast to the considerable lengths Kerry went to avoid describing last year’s military takeover in Egypt as a coup. Remember the comments he made during an interview on a Pakistani TV show shortly after it happened?

“The military was asked to intervene by millions and millions of people, all of whom were afraid of a descendance into chaos, into violence. And the military did not take over, to the best of our judgment so, so far. To run the country, there’s a civilian government. In effect, they were restoring democracy.”

The Obama administration ultimately side-stepped the decision on whether Egypt was a coup or not entirely.

I discussed the Administration’s refusal to designate the Egyptian military coup as a military coup shortly after the events of last July:

The problem lies in provisions of U.S. law that require military aid to be suspended in the event of a military coup in a country where we have been providing aid. This part of the law last became implicated in the wake of the 1999 military coup in Pakistan that deposed Prime Minister Nawaz Sharif, but it was quietly and quickly swept aside in the wake of the September 11th terrorist attacks when the cooperation of the Pakistani leaders became essential to military operations in Afghanistan. Now, with Mohammed Morsi swept out of power and replaced with a civilian leadership appointed by the military, the law is being implicated once again, threatening to complicate the U.S. relationship with Egypt.

That last part of the President’s statement in the immediate hours after the overthrow of former President Morsi was perhaps the most significant thing. Rather than calling on the military to return authority to “the democratically elected civilian government,” which would have been a clear reference to Morsi, the statement refers to “a democratically elected civilian government.” That’s a small difference in grammar that speaks volumes diplomatically. Mere hours after he had been removed from office, the United States was already signaling that Obama was accepting the fact that Morsi was gone, the military was in what it claims will be temporary control of the country, and calling on the new leaders to transition to civilian rule. So, obviously, the Obama Administration isn’t going to call what happened in Egypt a coup.

It’s entirely cynical, of course, but then there’s a lot of that going on in Washington in general and foreign relations in particular. In this case, it’s simply inconceivable that the U.S. is going to give up the leverage that continued aid to the Egyptian military supposedly gives us.

To put it bluntly, the Administration felt free to call the events in Thailand a military coup because doing so would not implicate any important relationship between the United States and the Thai military. The same was not true in Egypt last year, or in Pakistan in the years after the September 11th attacks. It is, as I said last year, entirely cynical but it also happens to be the right decision. In the case of Pakistan, our mission in Afghanistan has required us to maintain good relations with the powers-that-be in Islamabad notwithstanding any concerns about their disdain for democratic rule. The same is true of our relationship with the military in Egypt, which is one that has been ongoing since the Camp David Accords some 35 years ago. Calling the events in either of those nations a coup would have put those relationships in jeopardy, and the relationships are more important than concerns about the propriety of a military overthrowing a popularly elected government. In reality, of course, all three of the nations experienced a military coup, but reality and diplomacy aren’t always the same thing.

In a broad sense, the fact that parsing like this is even necessary suggests that the problem lies not in the State Department’s hyper-legalism so much as it does in the fact that such parsing is even necessary. While Congress does have a voice in foreign policy, and certainly has the power of the purse, it strikes me that it’s not entirely appropriate for Congress to be passing laws with blanket rules like the one implicated in these situations. Foreign policy often requires nuance, and black-and-white rules don’t allow for much nuance unless you end up engaging in the kind of obvious word games that the State Department has with regard to Egypt and Thailand.