Turkey's government appears to have rebuffed a coup attempt, but questions remains about the stability of the government going forward. 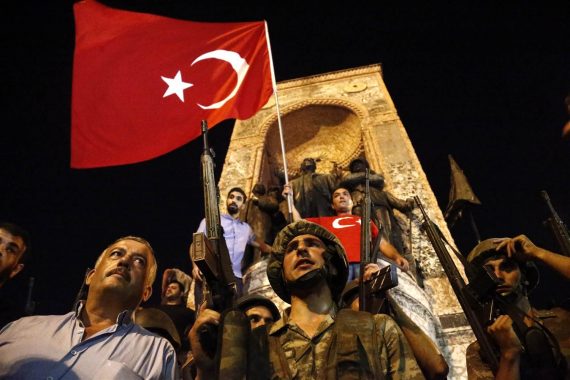 For much of the night last night, the streets of Istanbul and Ankara, Turkey were under siege as elements of the Turkish military attempted to overthrow the government of President Recep Tayyip Erdogan:

ISTANBUL — Turkey’s government rounded up thousands of military personnel on Saturday said to have taken part in an attempted coup, moving swiftly to re-establish control after a night of chaos and intrigue that left hundreds dead.

By noon, there were few signs that those who had taken part in the coup attempt were still able to challenge the government, and many declared the uprising a failure.

Prime Minister Binali Yildirim called the insurrection “a stain in the history of democracy” at a news conference on Saturday in Ankara, the capital. He raised the death toll in the clashes to 265, with 1,440 people wounded, and he said that 2,839 military personnel had been detained.

As the insurrection unfolded Friday night, beginning with the seizure of two bridges in Istanbul by military forces, President Recep Tayyip Erdogan was not heard from for hours. He finally addressed the nation from an undisclosed location, speaking on his cellphone’s FaceTime app — a dramatic scene that seemed to suggest a man on the grip of losing power. But in the early hours of Saturday morning, he landed in Istanbul, a strong sign that the coup was failing.

Mr. Erdogan placed blame for the intrigue on the followers of Fethullah Gulen, a Muslim cleric living in exile in Pennsylvania, who was the president’s ally until a bitter falling out three years ago. Mr. Gulen’s followers were known to have a strong presence in Turkey’s police and judiciary, but less so in the military.

Speaking Saturday morning, Mr. Erdogan said, referring to Mr. Gulen: “I have a message for Pennsylvania: You have engaged in enough treason against this nation. If you dare, come back to your country.”

The cleric denied in an emailed statement that he had been involved in the coup attempt.

Mr. Erdogan also said that Turkish fighter jets had bombed tanks on the streets of Ankara, and that a military helicopter being used by the coup plotters had been shot down.

There was also a battle early Saturday morning at Turkey’s main intelligence headquarters in Ankara, which was later secured by government forces, and a Turkish official said the intelligence chief, Hakan Fidan, had been taken to a secure location.

In a news conference on Saturday, Turkey’s top military officer, Gen. Umit Dundar, the acting head of the General Staff, said that “the coup attempt was rejected by the chain of command immediately.”

“The people have taken to the streets and voiced their support for democracy,” he said, adding that “the nation will never forget this betrayal.”

As Turkey began waking up after a long and in many ways surreal evening, it appeared that the elected government had re-established control. But many questions remained unanswered, including who exactly was behind the plot and what the longer-term fallout would be to the political system of Turkey, a NATO ally and important partner to the United States in the fight against the Islamic State.

Much of the violence overnight was in Ankara, where different branches of the security forces fought one another over control of government buildings, including the Parliament building, where several explosions were reported.

The state-run Anadolu Agency reported that 1,563 soldiers had been arrested. Television footage showed some soldiers, naked from the waist up, being put on a bus in Istanbul.

ISTANBUL — Turkey’s government defeated a coup attempt by a renegade faction of the military that pummeled government and security institutions overnight with fighter jets, restoring some control on Saturday after hours of chaos and clashes that killed at least 265 people and plunged the already troubled country into further uncertainty.

More than 100 coup plotters are now dead, acting military chief Gen. Umit Dundar said on live TV, while another 161 people — including civilians and police were killed as ordinary Turks poured into the streets to confront tanks amid pitched battles in urban areas. At least 1,440 were wounded, officials said.

“The situation is completely under control,” Prime Minister Benali Yildirim announced early afternoon on Saturday, adding that more than 2,800 Turkish members of the military have been arrested and calling the attempt “a dark stain for Turkish democracy.”

The move by rogue officers and their supporters was the most significant challenge to the country’s stability in decades, and raised fears that a close U.S. ally could be destined for a prolonged period of civil strife.

By morning, Turkish officials said the government had managed to claw back control from the coup plotters, whom Gen. Dundar described as coming mainly from the air force, military police and armored units. Government forces by midday had closed in on the army headquarters in the capital, Ankara, where at least 150 rebel troops were holed up, officials said.

The Interior Ministry also reported that five generals and 29 colonels had been removed from their posts.

Some of those involved appear to have fled as the coup fell apart and on Saturday Greece announced it had arrested eight men who landed on its territory in a military helicopter. Turkey has requested their extradition.

In Istanbul, the streets were largely empty after a night of gunfire, explosions and violent confrontations on the bridges and in the city’s main squares.

Small groups of residents gathered on corners and debated in hushed tones and shelves in many local shops were completely empty after a late night rush to stock up on food and water.

The U.S. embassy warned its citizens against heading to the airport amid reports of ongoing sporadic gunfire.

The night before, scores of Turkish citizens had flooded the streets of Istanbul and Ankara to confront the tanks rumbling into their cities.

Gen. Dundar blamed the coup attempt on a small group of disgruntled military officers loyal to the movement of a U.S.-based cleric, Fethullah Gulen, who maintains a network of adherents across Turkey and has long challenged Erdogan’s hold on power.

He said the military would purge members of the movement from its ranks, adding that the “era of coups and juntas have come to a close.”

The officers were destined to lose their jobs in August during a military reshuffle, added a Turkish official.

The Gulenist movement denied involvement, however, and amid the confusion, it was impossible to confirm who was behind the attempt to topple the government.

Erdogan has made many enemies in the 13 years he has run Turkey, first as prime minister and then, since 2014, as president, including within the military. Hundreds of officers have been imprisoned by his government, some of them accused of coup-plotting, and it had been widely thought that his crackdown on dissent had dispelled the risk of coups in the once coup-prone country.

Military coup’s are hardly a new thing in Turkey, of course. At several points since the nation’s founding in the years after World War One and the collapse of the Ottoman Empire, the military has stepped in to and taken control of the government when its leaders felt that civilian leadership was straying from the vision that had been set out for the nation at its founding, specifically including the idea that Turkey would remain a secular nation rather than an Islamic one. Erdogan’s time in office, both as Prime Minister and as President, has tested that secularism significantly, and the ongoing conflict in Syria, which has brought tens of thousands of refugees into the country in a very short period of time, has strained the nation’s resources significantly. Additionally, Erdogan has been one of the principal regional leaders advocating the idea that the problem of ISIS in neighboring Syria will not be solved until Bashar Assad is removed from power in Damascus, While this has been largely consistent with the policies of the Obama Administration, it has left Erdogan open to the accusation that he is secretly supporting ISIS by diverting Western policy in safeguard” the Turkish state when democratically elected governments seem to take off in the military disagrees with, Second of all, the coup itself seems to have originated with a small group of junior officers and the support of perhaps one General rather and did not have the support of the majority of military leadership. While the plotters were well-organized enough to be able to command a significant number of troops, including units armed with tanks, helicopters, and airplanes, the fact that the rest of the military remained loyal to the government, or at least on the sidelines, made success unlikely. Additionally, the nation’s police forces remained loyal to the government and used what firepower they had to battle members of the military in both Istanbul and Ankara, arguably a development that ended up turning the tide against the coup plotters. Finally, it doesn’t appear that the plotters took into account how the Turkish people would react to what was happening. Rather than hiding in their homes or supporting the military’s efforts to overthrow an oppressive government as they may have done in the past, this time the people took to the streets in support of the Erdogan government and essentially challenged the troops taking part in the coup to attack them if it wished to proceed any further. Unlike what might have occurred in the past, the military declined to turn on the people.

The big question, of course, is what all of this means for Turkey’s future and, in turn, how that will impact the progression of the war in Syria. Erdogan has vowed that the coup plotters and their supporters will be punished, and one can easily see last night’s events as being the pre-text for a wider purge of the remaining elements of the military that are not decidedly in Erdogan’s camp going forward. Of more concern, of course, is the fact that Erdogan’s tenure in office has been marked by increasing authoritarianism, including crackdowns on political enemies, dissent, and news sources on the Internet such as Google, Facebook, Twitter, and other means of communication. This coup is likely to give him the excuse he needs to justify further consolidation of power even as Turkey continues to pursue the seemingly impossible dream of membership in the European Union. Additionally, while Turkey remains a key NATO ally and the key to the fight against ISIS in Syria, this kind of instability will no doubt raise concerns in Washington, Paris, London, and other Western capitals where the fight against ISIS is quickly becoming the most important foreign policy issue on the table right now, If we can’t count on stability in the nation that is, effectively, serving as the launching pad for most of our attacks against ISIS, then how can we possibly hope to make any real progress in that conflict?