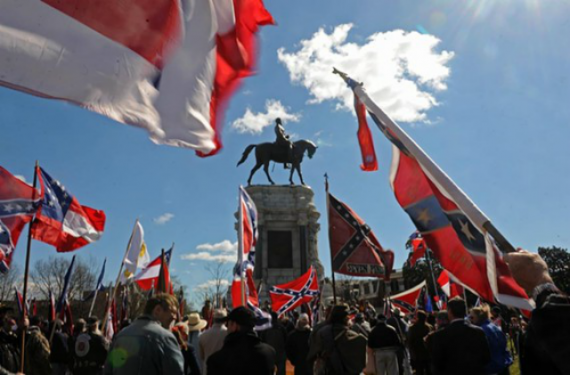 The opponents of removing Confederate statues from public places have often made the argument that the monuments are meant as a symbol of the supposed heritage of the South, not as symbols of racial prejudice or hatred. However, the history of when most of these monuments were erected demonstrates quite clearly that this is a lie.

Consider, for example, this chart from that Kevin Drum shares: (click to enlarge)

The chart shows two distinct peaks in the appearance of Confederate statues, one in the early part of the 20th Century, and the other during the Civil Rights Era. As Vox’s Zack Beauchamp points out this is not coincidental:

It’s not an accident that these statues were mostly built when the South was busy establishing Jim Crow and defending it from the civil rights movement. This is because the purpose of Confederate monuments, as Princeton historian Kevin Kruse argues on Twitter, is not to serve as pure historical markers — but to glorify the Confederate cause. They assert that a war fought on behalf of slavery was a just one, that the people who fought it were morally upright, and that white supremacy should be cherished as part of Southern “heritage.”

That’s why Trump’s equivalency between Confederate statues and one of George Washington misses the mark. Washington was a slave owner, yes, but the meaning of a Washington statue is not necessarily pro-slavery or pro-white supremacy — whereas that’s exactly the point of the vast majority of Confederate memorials in the United States.

Once you understand this point, it becomes obvious why neo-Nazis and white supremacists would rally to the defense of Confederate memorials. The only outstanding question is why the president of the United States would do the same.

In The Washington Post, meanwhile, History Professor Karen Cox expands on this argument:

Almost none of the monuments were put up right after the Civil War. Some were erected during the civil rights era in the early 1960s, which coincided with the war’s centennial, but the vast majority of monuments date to between 1895 and World War I. They were part of a campaign to paint the Southern cause in the Civil War as just and slavery as a benevolent institution, and their installation came against a backdrop of Jim Crow violence and oppression of African Americans. The monuments were put up as explicit symbols of white supremacy.

The group responsible for the majority of these memorials was the United Daughters of the Confederacy (UDC), the most influential white women’s organization in the South in the late 1800s and early 1900s. Honoring Confederate heroes, generals and soldiers alike, was one of the group’s primary objectives, and the hundreds of monuments throughout the South — and beyond — serve as testimony to the Daughters’ aggressive agenda to vindicate the Confederacy. That lasting power of the mythology they made is still evident today in the raging battles over the fate of the memorials: While Baltimore officials acted quickly to take down four Confederate monuments in that city Tuesday night, laws prevent the removal of such memorials in some of the states that seceded from the Union during the Civil War. Most of those laws were passed only recently, in reaction to calls to remove the monuments or change street names honoring Confederate generals.

The 1890s, when the UDC was founded and monument building began in earnest, represented a decade of virulent racism across the South. Not content to disenfranchise black men, Southern whites went on a lynching spree. Ida B. Wells, the African American journalist and anti-lynching crusader, documented 186 lynchings of black people in 1893 alone — mostly men but women and children, too. As she wrote in her account “The Red Record,” these “scenes of unusual brutality failed to have any visible effect upon the humane sentiments of the people of our land.”

Violence against blacks only increased in the early decades of the 20th century. In addition to continued lynching across the South, the Atlanta Race Riot of 1906 demonstrated how seriously white men took their supremacy over African Americans: An estimated 10,000 white men and boys in the city went after black men, beating dozens to death and injuring hundreds more.

Amid that brutality, the pace of Confederate monument construction increased. The UDC and other like-minded heritage organizations were intent on honoring the Confederate generation, establishing a revisionist history of what they called “The War Between the States.” According to this Lost Cause mythology, the South went to war to defend states’ rights, slavery was essentially a benevolent institution that imparted Christianity to African “savages,” and, while the Confederacy was defeated, theirs was a just cause and those who fought were heroes. The Daughters regarded the Ku Klux Klan, which had been founded to resist Reconstruction, as a heroic organization, necessary to return order to the South. Order, of course, meant the use of violence to subdue newly freed blacks.

While Confederate monuments did honor their white heroes, they did not always rely on the true history of what took place between 1861 and 1865. Nor was that their intent. Rather, they served to rehabilitate white manhood — not as the losers of a war, but, as the monument in Charlotte, states, preservers of “the Anglo Saxon civilization of the South.”

Today’s defenders of Confederate monuments are either unaware of the historical context or do not care. Like generations of whites before them, they are more invested in the mythology that has attached itself to these sentinels of white supremacy, because it serves their cause.

The history of these monuments is nearly identical to the history behind the reappearance of the Confederate Flag, and more specifically the battle flag used by the Army of Northern Virginia. For much of the post-Civil War era, that flag remained largely confined to places such as Confederate cemeteries and other such locations. It wasn’t until the early part of the 20th Century and the Civil Rights Era that the flag began appearing in public again. Additionally, it was during the Civil Rights Era that states began to incorporate the design of the flag into their stage flag as part of what came to be called the “Massive Resistance” movement that came into being in the wake of the Supreme Court’s decision in Brown v. Board of Education and other assaults on the Jim Crow regime that arose across the South. The intent of the resurgence of the display of the flag, and its incorporation into the state flags of states such as Georgia, Mississipi, and other states was to intimidate African-Americans and others involved in the Civil Rights movement and to rally whites around an easily recognizable symbol. In both cases, there was no appeal to heritage, only an appeal to racial hatred.

Given this, as Beauchamp notes above, there is a clear difference between statues honoring the Confederacy and those honoring men such as Washington and Jefferson. In the second case, the statues were and are meant to honor those who established the United States notwithstanding their imperfection. In the first case, the clear intent was to enshrine hatred and make it socially acceptable. The question is why the President of the United States would defend those who clearly wish to intimidate African-Americans and other minorities.

I’ll leave it to the reader to answer that question themselves.