The Economics of Slavery

Some striking data to illustrate the role slavery played in the economy of the South.

This is one of the those posts that I write because I know I am going to want to refer back to it in the future.

Matthew Yglesias points to a paper by Thomas Piketty and Gabriel Zucman (two economists from the Paris School of Economics) entitled “Capital is Back:  Wealth-Income Ratios in Rich Countries 1700-2010.”  The paper itself is about capital accumulation in rich countries and is interesting/significant in own right as it pertains to current debates over inequality.  However, Yglesias noted some extremely illustrative data from the piece that was relevant to capital holdings in the antebellum South that is worth highlighting.

In an attempt to assess historical rates of aggregate capital accumulation, the authors’ noted that a great deal of wealth in the United States in the pre-Civil War period was possess in the form of slaves:

By putting together the best available estimates of slave prices and the number of slaves, we have come to the conclusion that the market value of slaves was between 1 and 2 years of national income for the entire U.S., and up to 3 years of income in Southern states.

Needless to say, this peculiar form of wealth has little to do with “national” wealth and is better analyzed in terms of appropriation and power relationship than in terms of saving and accumulation. We view these “augmented” national balance sheets as a way to illustrate the ambiguous relationship of the New world with wealth and inequality. To some extent, America is the land of equal opportunity, i.e. the place where wealth accumulated in the past does not matter too much. But at the same time, America is also the place where a new form of wealth and class structure – arguably more extreme and violent than the class structure prevailing in Europe – flourished, whereby part of the population owned another part (35).

Here is the graphical representation of the findings: 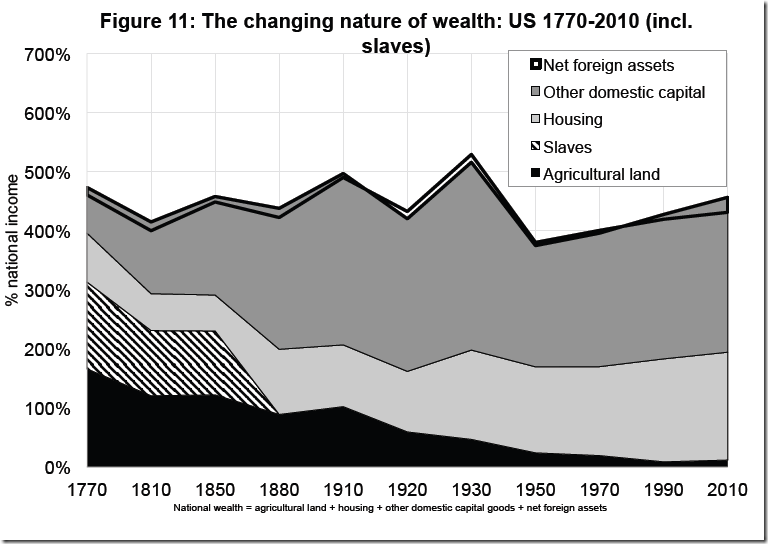 The “human capital” consisting of black men and women held as chattel in the states of the south was more valuable than all the industrial and transportation capital (“other domestic capital”) of the country in the first half of the nineteenth century. When you consider that the institution of slavery was limited to specific subset of the country, you can see that in the region where it held sway slave wealth was wealth.

For those who understand that the core reason for southern secession and therefore for the Civil War itself was slavery, then this information is less illuminating as it confirming.  However, I am constantly running into people who want to claim that the Civil War was caused by other factors, with the most popular being tariffs as well as the ever-popular “states’ rights” argument.

As I keep trying to tell any number of persons (who range from simply those who desperately want to hold to a romantic view of the antebellum South because they are from the South to hardcore neoconfederates):  the Civil War was very much driven by economic forces and slavery was the main variable in the discussion.

In 1860, slaves were worth more than than all all the industrial and transportation capital in the United States. This is why a war in the U.S. to end slavery was inevitable – in other countries where slavery ended peacefully, it was only a tiny fraction of their wealth. But for the South, slavery was their wealth.

So yes, it can properly be said that the Civil War was about states’ rights, but only if one acknowledges that the “right” in question was the right to maintain the institution of chattel slavery.  This fact is, of course, rather obvious to anyone who reads the documents of the day from the persons engaged in the seceding (for example).  Still, for those still struggling with the notion, I give them the figure above.