The End Of The Sarah Palin Fanboys (And Girls)?

Howard Kurtz notes that the Sarah Pain media phenomenon appears to be over and done with:

There was a sense of celebration in the air when Fox News struck a $3 million deal with Sarah Palin, beating out a slew of networks, syndicators, and even Hollywood studios for the services of the hottest phenomenon on the political landscape. But 16 months after network chief Roger Ailes closed the deal in a meeting with Palin and her husband, Todd, the excitement has cooled. Palin’s regular appearances as a commentator no longer move the ratings needle without a promotional push. Palin was supposed to host prime-time specials dubbed Real American Stories, but Fox insiders tell me the idea was shelved early on. The first one bombed, losing a chunk of its audience as the show progressed.

While Fox says it still values Palin, her relationship with the network treasured by red-state America has changed. Bill O’Reilly recently complained after a combative interview with her that she isn’t engaging on the issues. Even longtime cheerleader Glenn Beck told viewers she should have published a policy book: “It should have shown that, yes, she knows where Russia is.”

When Palin appeared from Alaska last week in a pink windbreaker that matched her lipstick, she castigated Barack Obama for a “befuddling foreign policy” in Libya and indirectly defended the birthers as “curious Americans” who shouldn’t be depicted as crazy for challenging the president’s birth certificate. Once, such thunderbolts would have ignited crackling headlines. But Palin made news only with a parting jab at departing CBS anchor Katie Couric, underscoring her lingering anger over their contentious campaign interviews in 2008.

Between February and April, according to an analysis for NEWSWEEK by General Sentiment, a company that tracks and measures online content, posts involving Palin fell 38.3 percent, to 235,032, over the past 30 days. Social-media mentions dropped in lockstep, down 32 percent over the same period, to 135,421. And the value of all that “free” media dropped roughly by half during this period, from $63 million to $33 million. While it would be foolish to count her out, it is hard to escape the conclusion that her influence has peaked. People close to Palin acknowledge that she has done virtually nothing to lay the groundwork for a campaign. But they don’t see her as toning things down, saying she is busy giving speeches (for as much as $100,000 a pop) and tending to her five kids and her grandchild.

This decline in Palin’s media presence is matched in the polls, where she’s fallen behind Mitt Romney, Mike Huckabee, and Donald Trump in polls of the 2012 GOP field and, in one recent CNN poll, was barely ahead of Ron Paul and Newt Gingrich. Slowly but surely, she’s fallen from being a first tier candidate to a mid-tier candidate, partly because many Republicans seem to have come to the conclusion that she isn’t running for President after all. On a national basis, Palin’s unfavorable ratings continue to rise nearly four months after her disastrous response to the controversy that arose after the Tuscon shootings: 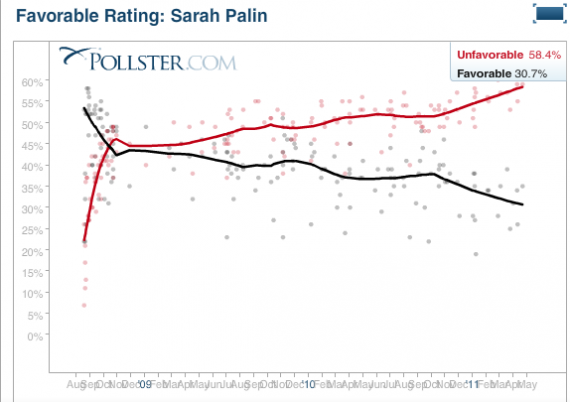 Additionally, in head to head match-ups against the President, Palin trails by nearly 20 points. To the extent there ever was a Palin “brand,” it’s pretty much ruined at this point. She’s the easiest punchline in the country, and probably not even as popular as the doppleganger that Tina Fey portrays on occasion. One wonders if Fox News Channel even wants to keep her around much anymore. The idea that Sarah Palin is anything other than a political curiosity at this point is nearly too silly to be taken seriously, which is probably why the family is branching out into yet another reality show. So, she’ll still be around but kind of in the same way that Kate Gosselin and The Real Housewives Of Atlanta are still around; a phenomenon, but not anything worth taking seriously.