The memory of the attack on Pearl Harbor is, inevitably, fading into history. 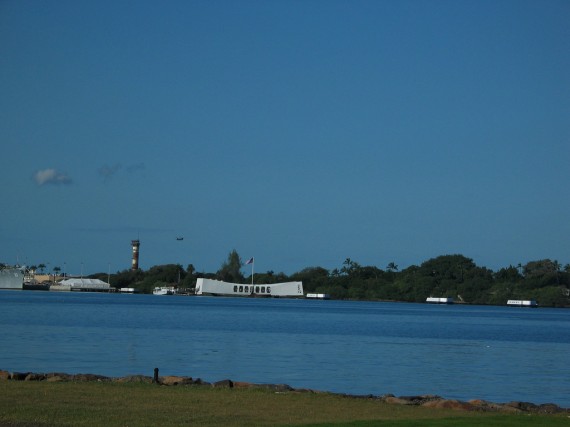 It was seventy years ago today that the Japanese fleet attacked the U.S. Naval Base at Pearl Harbor, Hawaii, dragging the United States into World War Two, and changing America and the world forever. Today is also the final time that the veterans group representing Pearl Harbor survivors will gather to remember their fallen comrades:

HONOLULU — For more than half a century, members of the Pearl Harbor Survivors Association gathered here every Dec. 7 to commemorate the attack by the Japanese that drew the United States into World War II. Others stayed closer to home for more intimate regional chapter ceremonies, sharing memories of a day they still remember in searing detail.

But no more. The 70th anniversary of the Pearl Harbor attack will be the last one marked by the survivors’ association. With a concession to the reality of time — of age, of deteriorating health and death — the association will disband on Dec. 31.

“We had no choice,” said William H. Eckel, 89, who was once the director of the Fourth Division of the survivors’ association, interviewed by telephone from Texas. “Wives and family members have been trying to keep it operating, but they just can’t do it. People are winding up in nursing homes and intensive care places.”

Harry R. Kerr, the director of the Southeast chapter, said there weren’t enough survivors left to keep the organization running. “We just ran out of gas, that’s what it amounted to,” he said from his home in Atlanta, after deciding not to come this year. “We felt we ran a good course for 70 years. Fought a good fight. We have no place to recruit people anymore: Dec. 7 only happened on one day in 1941.”

The fact that this moment was inevitable has made this no less a difficult year for the survivors, some of whom are concerned that the event that defined their lives will soon be just another chapter in a history book, with no one left to go to schools and Rotary Club luncheons to offer a firsthand testimony of that day. As it is, speaking engagements by survivors like Mr. Kerr — who said he would miss church services on Sunday to commemorate the attack — can be discouraging affairs.

“I was talking in a school two years ago, and I was being introduced by a male teacher, and he said, ‘Mr. Kerr will be talking about Pearl Harbor,’ ” said Mr. Kerr. “And one of these little girls said, ‘Pearl Harbor? Who is she?’

“Can you imagine?” he said.

One wonders how old the schoolgirl who asked this question was. Obviously, if this was a Middle or High School student, not knowing what Pearl Harbor means is pretty much inexcusable, but if we’re talking elementary school, then perhaps its understandable. After all, for contemporary Americans, Pearl Harbor is as far distant in the past as the Indian Wars on the Great Plains were for people living in 1941. Were it not for the fact that the attack itself, and its aftermath, were captured on film, one wonders if the memory of that day would have endured as long or as sharp as it has. In some sense, then, it’s inevitable that the memory will fade to some degree as the people who were actually alive when it happened leave us.

Is that a bad thing? Well, on some level, its important that we remember the events of our history and provide proper respect for the men and women who served their country above and beyond the call of duty on that day, and the many dark days of war that followed. On the other hand, it strikes me that at some point there becomes a difference between obsessing over events in the past, and marking them with appropriate remembrance. For example, this years 10th anniversary of the September 11th attacks were marked with wall-to-wall coverage of memorial services in New York, Washington, and Pennsylvania by all the major broadcast and cable networks. Does anyone believe that we’ll see the same kind of coverage on September 11, 2071? Probably not. As I noted in one of the posts I wrote on September 11th this year, perpetual mourning is not the American way. That doesn’t mean we will forget what happened on December 7, 1941, but it does mean that we’re entering a phase of history where it will be much more of an historical event than a memory from the past.

Besides, there will always be one place in America where Pearl Harbor will never be forgotten. Anyone who has been to the Pearl Harbor Memorial in Honolulu knows can attest to the solemnity of the place. Standing on the shoreline, you can clearly see the angles from which the Japanese fighters approached that morning, the ease with which they were able to inflict damage thanks to surprise and a tightly-packed fleet, and the absolute disaster that would have occurred had they been able to block the mouth of the harbor by sinking a ship in the right location. Perhaps the most powerful place, though, is the USS Arizona Memorial, where even today you can see old from the ships boilers rising to the surface. Legend says that the oil represents the tears of the men who died that day, and that it will continue until the last of the Arizona survivors joins their crewmen. It’s really quite a moving experience to visit the place, and I’m sure that will continue to be the fact for a long time to come. So, people won’t forget so much as they’ll move on. But then, that’s the nature of life, isn’t it?

Via Ed Morrissey, here’s a video of interviews with a handful of Pearl Harbor survivors sharing their memories of that day: