Yesterday was the seventy-sixth anniversary of the attack on Pearl Harbor. For most Americans, though, it was just another day. That's only natural. 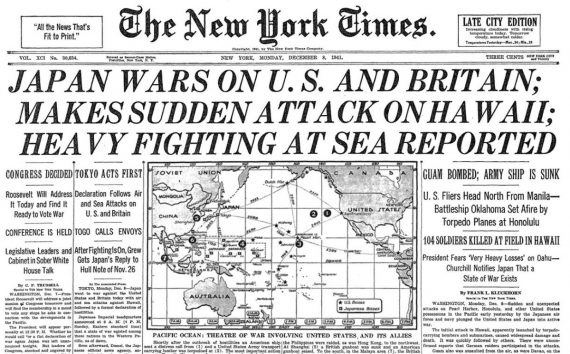 Over at The Glittering Eye, Dave Schuler notes that he saw few mentions of yesterday seventy-sixth anniversary of the Japanese attack on Pearl Harbor, which propelled the United States into World War Two and helped to change the course of history toward the world we live in today:

Did you notice how few articles there were about Pearl Harbor or, more broadly, World War II yesterday?

Dave’s experience was similar to my own. Other than brief mentions during the course of the day on one of the cable news networks and coverage of the event held at the White House at which President Trump addressed a small group of Pearl Harbor survivors and World War Two veterans, I didn’t notice much coverage of the day myself. There was more coverage of the anniversary on social media, especially for those of who follow the Twitter feed of historian Michael Beschloss, who posted iconic photographs and documents from the day and today made note of the anniversary of President Franklin D. Roosevelt’s “Day Of Infamy” speech on December 8, 1941, which marked American entry into World War Two at least in the specific. It would be a few days later, of course, that Congress followed up its declaration of war against Japan with similar declarations against Germany and Italy in response to those nations declaring war on the United States. Outside of these examples, though, my experience yesterday was similar to Dave’s in that the anniversary of the “date which will live in infamy” passed mostly without significance and certainly without the same kind of coverage we still see regarding the September 11th attacks even sixteen years after the attacks took place.

Dave attributes a large part of the reason for this to the fact that the fact that the generation that fought the war, the so-called “Greatest Generation.” Given that this was the generation that fought World War Two, it’s no surprise that their passing would bring with it less significance being given to the anniversary of the attack itself. Another important factor, of course, is simply the fact that the events took place so far in the past now that there is only a relatively small handful of the population that was alive and old enough to have a living memory of that day and the years that followed. Even someone who was only in their childhood on December 7th, 1941 would be well over eighty years old today, and that portion of the total population of the United States is growing smaller by the day. For most of us, The events of that day are so far in the past that they’re really only something we learned about in school or during significant anniversaries that received a lot of media coverage. By the time I was born, for example, it had been twenty-seven years since the attack on Pearl Harbor, and twenty-three years since the end of World War Two. For my generation, the attack on Pearl Harbor and the events of World War Two were largely something I learned about in school, although I did also hear stories from my parents, both of whom were children during World War Two. For today’s generation, the events of 1941-1945 are even harder to relate to, and largely something they’re most likely to learn about in history class. For the vast majority of the population of the United States today, these events are history rather than living memory, and that means there’s far less of an emotional attachment.

It’s worth noting that the anniversary of the Pearl Harbor attack isn’t the only event that has arguably begun to slip into the mists of history. It was just two weeks ago, that we marked the fifty-fourth anniversary of the assassination of President John F.. Kennedy in Dallas, which was arguably the most traumatic and iconic event in the lives of the Americans who were alive at that time.  I don’t recall seeing much significant media coverage of the day, and perhaps even less than there was of Pearl Harbor given that there wasn’t a White House event as there was yesterday. Part of the reason for the relatively quiet coverage of what used to be a significant anniversary may have been the fact that, this year, November 22nd was the day before Thanksgiving. To the extent the day was marked, it was in the Twitter feeds of Michael Beschloss and Clint Hill, one of the few surviving Secret Service agents who were at Dallas that day, both of whom recounted the events of the day in near-real time on their Twitter feeds. Notwithstanding the coincidence of the anniversary of JFK’s assassination and the Thanksgiving holiday, though, it seems clear that this event too is slipping into history for a large segment of the American public.

Earlier this year, as we marked the 16th anniversary of the September 11th attacks, I made note of the fact that the events of that day, which remain fresh in the minds of all of us who saw them unfold live on television, also seemed to be slipping into a different kind of memory, and also noted the significance between the nation remembered Pearl Harbor even when it was still a relatively recent event:

Six years ago, when the nation marked the tenth anniversary of the attacks, I noted the fact that there was a marked difference between the way the media was covering that anniversary, and the way the nation dealt with the tenth anniversary of another national tragedy, the attack on Pearl Harbor. As I noted at the time, there was no national obsession with the anniversary in the way that we displayed over the anniversary of the 9/11 attacks. In part, of course, that was because the war that began on December 7, 1941 had been over for six years and the United States was at the start of what became a four-decade long standoff with the Soviet Union in which our former adversaries in Germany and Japan became close allies. In fact, in December 1951 American troops were fighting a Communist regime in North Korea and its Chinese protectors and Japan was both an ally in that war and a place where soldiers granted leave would visit for rest and recreation. Germany, meanwhile, had become the frontline in the European standoff with the Soviet Union, with West Berlin as the hot point of that standoff. By contrast, in both 2011 and today, the war that began on that bucolic September morning sixteen years ago is still going on, and it shows no signs of ending anytime soon. It’s because of that, in part, that I suspect “remembering” the attacks seems like far more of an opening wound considering that we’re now at the point where there are people in college and High School who have no living memory of the day and that they will soon be replaced by people who weren’t even alive when the attacks took place.

[T]here does come a time when it comes time to leave the mourning behind. As I noted, even the police officers and firefighters in New York City eventually took the black bands off their badges. It doesn’t mean they’ve forgotten what happened, it just means that there comes a time to move on. Perhaps we’ve reached that point now that we’re at the sixteenth anniversary of the attacks. No doubt, we’ll see expanded coverage when we reach years like 2021, 2026, and so forth. Eventually, though, there will come a time when the September 11th attacks are as far in the past as Pearl Harbor is today. At that point, there will be more people alive for whom the attacks are events in a history book than there will be people with a living memory of September 11th and it will likely be the case that the anniversary will be marked in different ways than we see today. That won’t be a bad thing it will just be reality.

Additionally, on the occasion of the seventieth anniversary of the attack on Pearl Harbor, I wrote this:

[F}or contemporary Americans, Pearl Harbor is as far distant in the past as the Indian Wars on the Great Plains were for people living in 1941. Were it not for the fact that the attack itself, and its aftermath, were captured on film, one wonders if the memory of that day would have endured as long or as sharp as it has. In some sense, then, it’s inevitable that the memory will fade to some degree as the people who were actually alive when it happened leave us.

Is that a bad thing? Well, on some level, its important that we remember the events of our history and provide proper respect for the men and women who served their country above and beyond the call of duty on that day, and the many dark days of war that followed. On the other hand, it strikes me that at some point there becomes a difference between obsessing over events in the past, and marking them with appropriate remembrance. For example, this years 10th anniversary of the September 11th attacks were marked with wall-to-wall coverage of memorial services in New York, Washington, and Pennsylvania by all the major broadcast and cable networks. Does anyone believe that we’ll see the same kind of coverage on September 11, 2071? Probably not. As I noted in one of the posts I wrote on September 11th this year, perpetual mourning is not the American way. That doesn’t mean we will forget what happened on December 7, 1941, but it does mean that we’re entering a phase of history where it will be much more of an historical event than a memory from the past.

All of this leads one to wonder how the September 11th attacks will be remembered by those who will be alive on September 11th, 2077. At that point, time will have advanced as far past the day of the attacks as we are today from the events of December 7, 1941. While it’s more likely that advances in health care will mean that the number of people alive who are old enough to remember the day will be larger than the segment of the population who have similar memories of the Pearl Harbor attack, the majority of the American public will be far too young to have any such living memory. Hopefully, many of them will be young enough that they will not have grown up and lived their lives at a point when the nation was still fighting the “War On Terror” that began on that day. Whatever the case in that regard is, it’s likely that for many Americans the day will pass like any other, and some future Dave Schuler will be asking a similar question about the coverage in whatever the popular media of the future will be of the events of September 11, 2001. 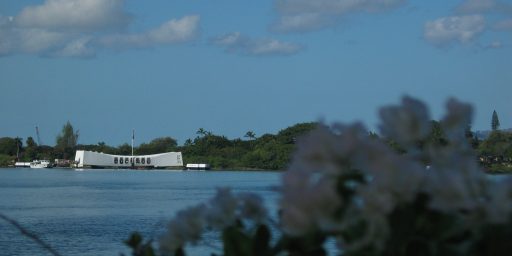