I didn’t attend yesterday’s events; it wasn’t my day. I was, however, in Falls Church in the morning and in DC in the afternoon. One couldn’t have asked for a better day weather-wise. The oppressive heat and humidity–and afternoon rain–that are the norm for this region by late May were in abatement. 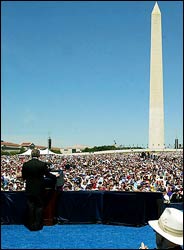 Raising up this memorial took skill and vision and patience. Now the work is done. And it is a fitting tribute — open and expansive, like America; grand and enduring, like the achievements we honor.

The years of World War II were a hard, heroic and gallant time in the life of our country. When it mattered most, an entire generation of Americans showed the finest qualities of our nation and of humanity. On this day, in their honor, we will raise the American flag over a monument that will stand as long as America itself.

In the history books, the Second World War can appear as a series of crises and conflicts, following an inevitable course from Pearl Harbor to the coast of Normandy to the deck of the Missouri.

Yet, on the day the war began, and on many hard days that followed, the outcome was far from certain. There was a time in the years before the war, when many earnest and educated people believed that democracy was finished. Men who considered themselves learned and civilized came to believe that free institutions must give way to the severe doctrines and stern discipline of a regimented society.

Ideas first whispered in the secret councils of a remote empire, or shouted in the beer halls of Munich, became mass movements, and those movements became armies. And those armies moved mercilessly forward, until the world saw Hitler striking in Paris and U.S. Navy ships burning in their own port.

Across the world, from a hiding place in Holland to prison camps of Lausanne, the captives awaited their liberators. Those liberators would come, but the enterprise would require the commitment and effort of our entire nation.

In all, more than 16 million Americans would put on the uniform of the soldier, the sailor, the airman, the Marine, the Coast Guardsman or the merchant mariner. They came from city streets and prairie towns, from public high schools and West Point. They were a modest bunch, and still are.

The ranks were filled with men like Army Pvt. Joe Seccato. In heavy fighting in France, he saw a good friend killed, and charged up a hill, determined to shoot the ones who did it. Pvt. Seccato ran straight into enemy fire, killing 12, wounding two, capturing four, and inspiring his whole unit to take the hill and destroy the enemy.

Looking back on it 55 years later, Joe Seccato said, “I’m not a hero. Nowadays, they call what I did road rage.”

This man’s conduct that day gained him the Medal of Honor, one of 464 awarded for actions in World War II.

Americans in uniform served bravely, fought fiercely and kept their honor, even under the worst of conditions. Yet they were not warriors by nature. All they wanted was to finish the job and make it home. 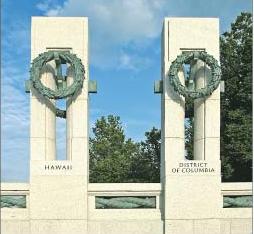 WaPo — A Day to Honor the Living and Mourn the Lost 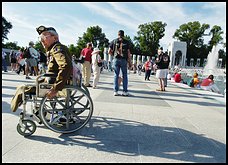 From Huntingdon Valley, Pa., William E. Snow came with his wheelchair and his memories of Pearl Harbor. Herman Walton, once an Army truck mechanic near the front line in Germany, flew north from Columbus, Ga.

Marjory Doezel, who helped save the wounded in Europe, arrived in full dress uniform from Upstate New York. And Gene Mead, another former Navy man, brought his electric scooter all the way from a Chicago suburb.

On a Mall awash in patriotism yesterday, they again shared, perhaps for the very last time, a common mission and purpose.

They were there to be recognized, of course, for their during that awful time more than 60 years ago when the world seemed on the verge of collapse. Most long had wondered whether this tribute would ever take place.

Under a peerless blue sky, the dedication of the National World War II Memorial was also a reunion, with many men and women searching the multitudes for a familiar face. Or, at the least, a familiar insignia on a hat, vest, jacket.

Wesley D. Moore of Center Ossipee, N.H., wore the “Hells Bells” cap of his Army Air Forces fighter squadron for that very reason and parked himself prominently on a Mall bench.

“I came to look for guys I haven’t seen in 65 years,” he said, not since the 316th fought through the sandstorms of Libya, Egypt and Tunisia, then in the skies over Italy, France and Germany. Moore knows that few of these buddies are left; since June, four of the 11 men at his squadron’s last gathering have passed on.

Did he come to the Mall for them? “Absolutely,” he declared. “We were like one big family. We lived together 24 hours a day. We played together, fought together, ate, worked together.” 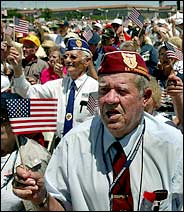 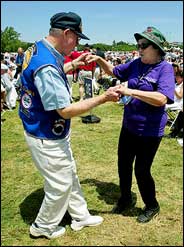 Rick Atkinson — A Paean, in Stone and Bronze, to Those Who Vanquished Evil 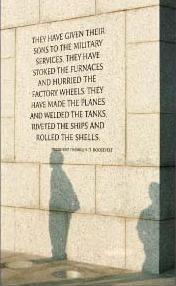 When a steadily shrinking legion of veterans musters on the Mall this weekend to dedicate the National World War II Memorial, rarely will so few be owed so much by so many.

The size and central location of the memorial — 7 1/2 acres, midway between the Washington Monument and Lincoln Memorial — imply the monumental nature of the war it commemorates: the largest, most catastrophic event in human history, at least since the Great Flood.

From the German invasion of Poland in 1939 until the Japanese surrender in Tokyo Bay in 1945, the war lasted 2,193 days and claimed an average of 27,600 lives every day, or 1,150 an hour, or 19 a minute, or one death every three seconds. In the time it takes to read this paragraph aloud, 10 people perished in World War II — an estimated total of 60 million.

The new memorial is 21st century America’s effort to capture, in granite and bronze and gilt lettering, the 20th century’s central myth, “a vast imagining of a primal time” — in the words of novelist John Updike — “when good and evil contended for the planet, a tale of Troy whose angles are infinite and whose central figures never fail to amaze us with their size, their theatricality, their sweep.”

Inexorably, the day is approaching when not a single human alive has a personal recollection of the war, which then will slide fully into mythology, history and collective memory. Although 16.4 million Americans served during the war, fewer than 5 million remain alive; the youngest survivors now are in their late seventies, and they are passing at the rate of 1,100 a day.

The memorial dedicated this weekend is part of that mnemonic migration, a tribute not only to those who served, or the 291,000 U.S. battle deaths, or the 670,000 U.S. wounded, or the tens of millions who labored in factories and fields and dockyards. It is an effort to convey, to generations hence, that the war was a struggle both about territory and, as the historian Gerhard L. Weinberg has written, “about who would live and control the resources of the globe, and which peoples would vanish entirely because they were believed inferior or undesirable by the victors.”

It was a war that ranged across six continents, from those titanic, three-syllable battlefields that still serve as historical mileposts — Stalingrad, Coral Sea, Anzio, Normandy — to obscure fights in improbable settings rarely associated with the Second World War, places like the Aleutians, Madagascar, Syria and Darwin, Australia. 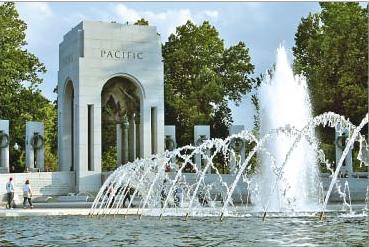 WaPo — Roundup of past stories on the Memorial.

WaPo — Inside the Memorial (Photos, blueprints, and history:)