The Fine Line Between Protest and Riot

Hillary Clinton's two biggest challengers were ambushed at a progressive political convention over the weekend. 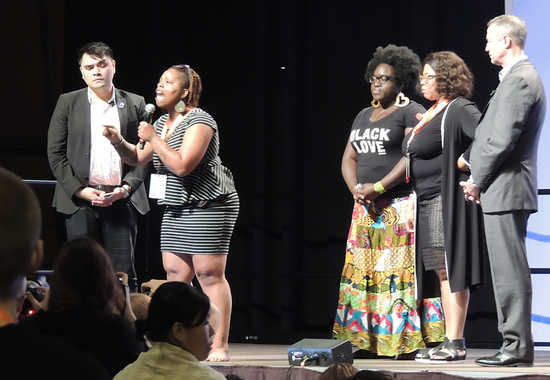 Hillary Clinton’s two biggest challengers were ambushed at a progressive political convention over the weekend.

At the Presidential Town Hall this weekend at Netroots Nation 2015, the largest annual gathering of liberal activists in America, there was a moment of two parallel universes operating simultaneously, signifying the cleavages between racial and economic justice on the progressive left. Democratic presidential candidate Bernie Sanders was moving through his main points about economic inequality and the hijacking of the nation by big money, pointing out statistical analyses on things like student debt and the gains of the one percent. (This came after former Maryland governor Martin O’Malley, the other candidate at the event, had already left the stage). At the same time, on the floor among the crowd, #BlackLivesMatter protesters marched and chanted, “Say her name.” The names of the black women who have died in police custody were never mentioned from the stage.

Movement-based politics helped light the fire for the demonstration at the Presidential town hall, which was specifically designed to confront the powerful and leave them no escape route. “That was my idea was to have them respond in real time,” said Ashley Yeats, a St. Louis-based #BlackLivesMatter organizer who helped plan the protest with the Dream Defenders and Black Alliance for Just Immigration (BAJI). “Because too often we do actions, and people get time to go back and sit for a minute. I was, like, ‘No, let’s have our debate. What would a black debate look like?'”

The planned protest began midway through O’Malley’s remarks, the first of the two candidates to speak. Protesters stormed toward the stage and shouted out the names of Sandra Bland and other black women who have died in police custody, imploring the candidates to address them. Tia Oso, an Arizona-based activist with BAJI, was given a mic and hopped on stage next to O’Malley and town hall moderator Jose Antonio Vargas. In her remarks, she expressed her frustration with structural racism and white supremacy. The other protesters did various call-and-response chants from the floor. “Wait a second, breathe!” Vargas pleaded. “We can’t breathe!” replied the protesters, echoing the last words of Eric Garner, the 43-year-old Staten Island man killed by a police chokehold one year ago Friday.

The first question that comes to my mind is Where the hell was the security? You’ve got a sitting United States Senator and a former state governor getting stormed on stage and nobody taking control? Thankfully, these people just wanted to hijack the agenda and get their message out. But what would have stopped them from injuring Sanders and O’Malley had that been their intent?

Second, as regular readers know, I’m continually frustrated by the likes of Code Pink taking over events in DC. Hundreds of people take time out of their busy day to hear the invited guests, not a bunch of yahoos who, seemingly by definition, couldn’t otherwise attract an audience. But that ilk is merely rude; they’re not storming the dais and getting close enough to harm the speakers.

Third, while I suppose this puts the candidates on the spot and highlights the protesters’ agenda, it’s neither an effective means of holding a conversation nor a particularly useful indicator of qualifications for the presidency. Few people give nuanced responses when ambushed like this. And, even as good on their feet as some recent presidents have been, the job is deliberative. Most if not all decisions are made after consultations with staffs, if not the entire interagency process.

Most of the liberal commentariat, perhaps not shockingly, disagrees with me. Writing at The Nation, Joe Dinkin believes that Bernie Sanders, in particular, “blew a huge opportunity . . . to convince voters of color that he cares deeply about racial justice.” Similarly, FireDogLake’s Kevin Gosztola argues that the protest was necessary to get the issue on the agenda and concurs that Sanders and O’Malley stumbled in their moment. Both, however, note that a sizable portion of the audience seemed to agree with my assessment that “the organizers being disrespectful, obnoxious, and impolite.”

All that said, it’s somewhat remarkable that #BlackLivesMatter is having so much trouble getting candidates to respond to an issue that has been very much at the top of the news for months. Given the power of African American voters among the Democratic nominating electorate, in particular, one would think the candidates would be falling all over themselves to talk about Eric Garner and Sandra Bland. There’s hard to see much downside.

Less surprising, but still a shame, is how little the candidates for the Republican nomination are talking about the issue. The party leadership has spent the better part of the last two decades bemoaning their poor showing among black voters, typically drawing less than ten percent of that demographic in major elections. Not only would taking the most egregious of these cases seriously help chip away at that problem but reforming policing, decriminalizing trivial nonviolent offenses, and related issues would be very attractive with swing voters as well.