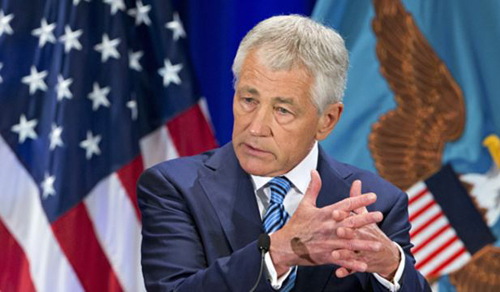 Near the beginning of his first public policy address as defense secretary, Chuck Hagel told the assembled military officers,

As you move onward and upward in your careers, I would urge you to always keep three questions in mind before making a decision:

● Does this help protect national security?

● Is this in America’s strategic interests, which includes the political, economic, and moral dimensions?

● Is this worthy of the service and sacrifice of our men and women in uniform, and their families?

In my latest for The National Interest, “Hagel’s Three Questions,” I ponder how well our nation’s civilian leadership has followed that sage advice.  My conclusion:

Despite ending his address by proclaiming “America does not have the luxury of retrenchment” and can “make a better world for all people with its power,” my sense is that Hagel actually asks himself those three questions when deciding to commit American tax dollars and, more importantly, American lives. Indeed, he argued that the process must be guided by “a principled realism that is true to our values” and while acknowledging the military is “an essential tool of American power,” he cautioned it “must be used judiciously, with a keen appreciation of its limits.”

But Hagel is part of an administration that’s continued a bipartisan proclivity for military intervention and nation building that has dominated since the end of the Cold War. To be sure, President Obama opposed the Iraq War when he was a mere Illinois state senator, displaying a prescience that neither his vice president, either of his secretaries of state, Hagel, nor myself possessed. But he doubled down on a mission in Afghanistan that was obviously unachievable and launched a war in Libya while ostensibly “leading from behind.”

Then again, he has thus far avoided intervention in the Syrian civil war, avoided being goaded into military action to preempt Iranian nuclear capability, and stayed cool during the latest temper tantrum by North Korea’s child dictator. Let’s hope these decisions, plus the choice of Hagel to lead the Pentagon, signal that Obama is at heart a strategic realist. Hagel should raise those three questions at every turn as the administration shapes our defense priorities and considers those options that never seem to be off the table.