The Federal Budget Deficit appears headed in the right direction, for now. 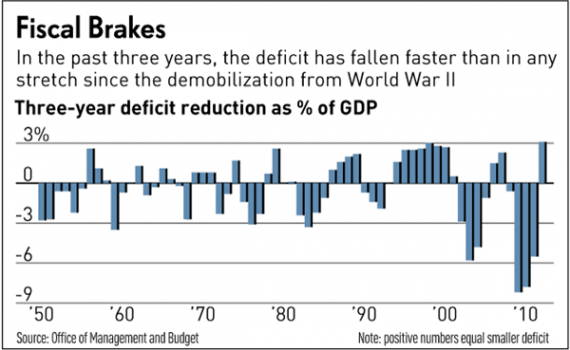 You may not know it from the tone of the debate in Washington, but the Federal Budget Deficit has shrunk at a faster rate over the past three years than at any time since 1945:

Believe it or not, the federal deficit has fallen faster over the past three years than it has in any such stretch since demobilization from World War II.

In fact, outside of that post-WWII era, the only time the deficit has fallen faster was when the economy relapsed in 1937, turning the Great Depression into a decade-long affair.

If U.S. history offers any guide, we are already testing the speed limits of a fiscal consolidation that doesn’t risk backfiring. That’s why the best way to address the fiscal cliff likely is to postpone it.

While long-term deficit reduction is important and deficits remain very large by historical standards, the reality is that the government already has its foot on the brakes.

In this sense, the “fiscal cliff” metaphor is especially poor. The government doesn’t need to apply the brakes with more force to avoid disaster. Rather the “cliff” is an artificial one that has sprung up because the two parties are able to agree on so little.

Hopefully, they will agree, as they did at the end of 2010, to embrace their disagreement for a bit longer. That seems a reasonably likely outcome of negotiations because the most likely alternative to a punt is a compromise (expiration of the Bush tax cuts for the top and the payroll tax cut, along with modest spending cuts) that could still push the economy into recession.

Rather than applying additional fiscal restraint now, the government needs to make sure it sets the course for steady restraint once the economy emerges further from the deep employment hole that remains. In fact, a number of so-called deficit hawks are calling for short-term tax cuts to spur growth, rather than immediate austerity.

That’s just a bit faster than the 3.0 percentage point deficit improvement from 1995 to ’98, but at that point, the economy had everything going for it.

Other occasions when the federal deficit contracted by much more than 1 percentage point a year have coincided with recession. Some examples include 1937, 1960 and 1969.

Now, the deficit hawks out there will make the point that the reductions that we’re talking about here come after some of the highest budget deficit numbers in American history. For three years in a row, the Federal Budget Deficit exceeded $1 Trillion per year. Additionally, the deficit surpassed 10% of Gross Domestic Product. Now, to be fair, a significant part of this was due to the fact that the economy had been thrown into a deep, deep recession that had a significant impact on the tax receipts that the Federal Government was receiving on an annual basis. Additionally, Gross Domestic Product has been growing at a pathetically anemic rate ever since we came out of the recession which does tend to exaggerate the deficit-to-GDP ratio to some extent. The deficit hawks also have a good argument when they point out that the current budget deficit, which will end the current Fiscal Year somewhere north of $600 billion will still be higher in pure dollar numbers than it had been at any point prior to the Great Recession. For that reason alone, it is foolish to argue that we’ve “solved” the deficit problem, or that now is the time to start opening up the spigots of Federal spending once again. Indeed, what it actually argues in favor of is continuing the policies that have helped us make so much progress on the deficit in such a short period of time.

At the same time, though, the fact that the deficit is now headed in the right direction, and will hopefully continue to do so, is an argument in favor of a shift away from the old Washington arguments about spending and toward policies that will both help to continue to bring order to our fiscal house and promote the economic growth we need both to create jobs and to create the conditions that will make it easier to bring the deficit under control. Comprehensive tax reform, at both the personal and corporate levels, is one of those areas. There is much about our current tax code that is wasteful both fiscally and economically, and some fairly straightforward changes that could be made that would both reduce the burden on businesses and taxpayers and, thanks to economic growth, increase the amount of revenue that the Federal Government actually collects. This applies to several other areas of government policy. If the budget deficit keeps moving in the right direction, we’ve got plenty of opportunities to address these areas, if the political will in Washington exists to do so any the parties can get beyond their partisan differences.

Oh, who am I kidding?

The Era Of Trillion Dollar Deficits Is Set To Return, And Republicans Don’t Seem To Care