Thanks for nothing, Republicans.

The Congressional Budget Office is reporting that we will officially hit $1,000,000,000,000 budget deficits in the upcoming Fiscal Year:

The deficit — the gap between what the government takes in through taxes and other sources of revenue and what it spends — will reach $960 billion for the 2019 fiscal year, which ends Sept. 30. That gap will widen to $1 trillion for the 2020 fiscal year, the Congressional Budget Office said in updated forecasts released on Wednesday.

The updated projections show deficits rising — and damage from Mr. Trump’s tariffs mounting — faster than the office had previously predicted. In May, the budget office said it expected a deficit of $896 billion for 2019 and $892 billion for 2020.

That damage would be even higher if not for lower-than-expected interest rates, which are reducing the amount of money the government has to pay to its lenders. Still, the 2019 deficit is projected to be 25 percent larger than it was in 2018, and the budget office predicts it will continue to rise every year through 2023.

By 2029, the national debt will reach its highest level as a share of the economy since the immediate aftermath of World War II.

The increasing levels of red ink stem from a steep falloff in federal revenue after Mr. Trump’s 2017 tax cuts, which lowered individual and corporate tax rates, resulting in far fewer tax dollars flowing to the Treasury Department. Tax revenues for 2018 and 2019 have fallen more than $430 billion short of what the budget office predicted they would be in June 2017, before the tax law was approved that December.

The need to borrow more money has been aggravated by several bipartisan budget agreements to raise military and nondefense domestic discretionary spending.

And it could increase if the trade war further chills business investment and consumer spending, resulting in slower economic growth and fewer tax dollars flowing to the Treasury Department.

“One likely reason for the lower-than-expected receipts is that some parts of the economy have been weaker than C.B.O. projected in April 2018,” the budget office said. “A number of developments other than the tax act appear to have contributed to that weakness, including increases in tariffs, greater uncertainty about trade policy and slower economic growth in the rest of the world.”

The ballooning deficit defies a historic trend: Typically, the budget deficit shrinks when unemployment is low. But it is increasing despite the longest economic expansion on record and the lowest jobless rate in 50 years.

It also underscores the degree to which Republicans in Washington — who championed fiscal responsibility under President Barack Obama, a Democrat — have largely abandoned that goal. While lawmakers continue to talk about the need to reduce the deficit, it is no longer the kind of animating issue that ushered the Tea Party into power.

Mr. Trump has shown little inclination to prioritize deficit reduction, and has instead considered policies that would add to the debt. The president has mused in recent days about reducing the taxes that investors pay on capital gains, a move that is estimated to add $100 billion to deficits over the next decade. He has also talked about cutting payroll taxes, which could reduce revenues by $75 billion a year for every percentage point cut in payroll tax rates.

We’ve seen deficits at $1 trillion before, of course. In the early years of the Obama Administration the Federal Budget Deficit exceeded that amount for two years in a row, a circumstance that happened due in part to both the contraction in federal revenues that occurred in the wake of the Great Recession and the increased spending reflected in part by the recovery package that the Obama Administration passed shortly after taking office. Along with the Democratic push for health care reform, those deficits became a campaign issue for Republicans and their victories in the 2010 midterms led to several showdowns with Democrats and, eventually, the passage of the Budget Control Act of 2011 that actually managed to put some breaks on spending that, along with increased revenues due to the economy recovery, reduced deficits steadily for most of the remainder of former President Obama’s time in office.

This time, the record-setting deficits that we are likely to see for the foreseeable future are coming at a time when the economy continues to boom during what has become one of the longest economic recoveries in history, and that they come at a time when financial markets are becoming increasingly sensitive to higher levels of debt and interest rates. Ordinarily, that should lead the Congress and the President to be more sensitive about taking action that increases the deficit and debt. Instead, we’ve gotten the exact opposite.

When the final budget deal was put forward in mid-February of last year, for example, it included massive spending increases in almost every budget category and busted through the controls that had been put in place during the Obama Administration. As The New York Times noted at the time, this effectively means that Republicans have learned to love the deficits and debt they once claimed to abhor. This is the same Republican Party, which had spent the Obama years lecturing Washington about spending and deficits. In the Trump Era. that same party has become the party of deficits and debt. By April of last year, the Congressional Budget Office had officially forecast that we’d be seeing trillion dollars deficits by the end of Fiscal Year 2019 and just a few months later, the national debt crossed a new benchmark and was north of $21 trillion

The word hypocrisy comes to mind here This, after all, is the same Republican Party that has preached the gospel of fiscal responsibility for years while at the same time ignoring those ideas when it has political power. The supposed Republican fidelity to fiscal responsibility and its concern about rising Federal Budget Deficits and the National Debt is something that has proven to be little more than a political slogan that was largely based on who controlled the White House. When former Presidents Bill Clinton and Barack Obama were in power, Republicans argued that out of control spending and deficits were destined to drive up interest rates, cause the national debt to explode, and increase interest rates. They used these issues as political cudgels against the Democratic White Houses and members of Congress during both Administrations and, of course, as a way to appeal to voters and supporters. Riding this wave, the GOP was able to take control of both Congress and, eventually, the White House in 2000 and 2016. In the wake of both elections, though, everything changed.

During the Administration of George W. Bush, for example, Republicans presided over massive increases in spending that were quite plainly fiscally irresponsible. On the domestic side of the equation, they introduced a massive new trillion-dollar entitlement in the form of Medicare Part D without finding a way to pay for it. Similarly, they introduced education policy legislation such as the No Child Left Behind program that led to increases in Federal spending, again without any provisions about how it was going to be paid for in the future. Under President Bush’s leadership, they authorized and fought two wars, only one of which was actually justified and necessary, that imposed serious financial burdens on the Federal Government both while the war was being fought and well into the future. Once again, they provided no means to pay for the present or future costs of those wars. On top of all that, they cut taxes. While that is not a bad thing in and of itself, and I’m certainly not going to argue against the lower tax burden that I and most other Americans had during the Bush years, from the perspective of fiscal responsibility it’s an utterly insane strategy.

This was especially true with respect to the Iraq and Afghanistan Wars. In the past, we had traditionally found ways to finance wars via what usually ended up being a combination of higher taxes and short-term debt in the form of war bonds and other means of financing. No such effort was made to do this during the Bush years even though it’s likely that the White House could have made a convincing political argument that we needed to find a way to pay for the war that was necessitated by the September 11th attacks. Instead, President Bush chose to basically let the political capital he had gained in the wake of the attacks go to waste and the Republican Party in Congress took the position of Alfred E. Neuman and adopted a “What, me worry?” when it came to fiscal responsibility.

When Republicans regaining control of the White House in 2016, all those proclivities returned. Spending skyrocketed across the board. Taxes were cut despite the estimates that convincingly argued that going so would add trillions to future deficits. And, of course, we continue to pursue an aggressive interventionist foreign policy, expanding the so-called “War On Terror” into new parts of the world, and increasing the defense budget by tens of billions of dollars per year. Again, all without providing for a way to pay for it. While there are a handful of Republicans who say they still care about these issues, the rise of Donald Trump has meant the death of the deficit hawks, mostly voluntarily thanks to the sycophantic shrinking of the voices that once spoke out strongly on the issue. And now, we’re going to pay the price for it.

Historian Julian Zeiler argues that all of this busts a favorite Republican myth:

Republicans often complain that Democrats in Congress refuse to go along with the spending cuts that would be needed to make the tax reductions financially plausible. Still, the GOP moves ahead understanding that most Americans won’t tolerate cuts to their federal benefits as they themselves drive for higher defense spending.

President Jimmy Carter set the tone in the late 1970s by insisting on limited spending. President Bill Clinton left office with a huge federal surplus (which President Bush ate up through his 2001 tax cuts, eventually ending his second term with the deficit at over a trillion dollars) and President Barack Obama helped reduce the deficit from $1.4 trillion in 2009 to $485 billion in 2014, ending at $587 billion in 2016.

Democrats have a greater incentive than Republicans to balance the budget — doing so allows them to introduce new social programs. Republicans have been comfortable creating massive deficits so to “starve the beast” of government, as Ronald Reagan’s Budget Director David Stockman once said.

The right understands that the more politicians talk about the importance of curbing deficits, the more Democrats are pressured into cutting back on existing policies, and the harder it becomes to build support for new programs.

But the myth that Republicans care more about deficits persists despite the historical record. Perhaps President Trump’s clear record of profligacy will expose the myth once and for all and remind voters that the Republican rhetoric on fiscal responsibility is all talk.

Thanks, Trump. Thanks, Republicans. This is all your doing. 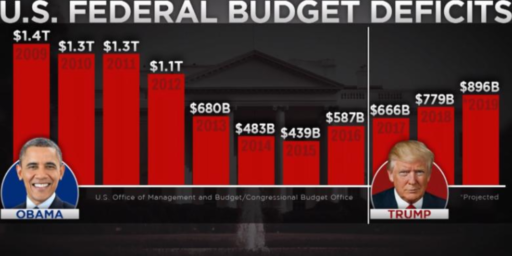 Budget Deficit Sets Another Record Under Trump, Heads Toward $1 Trillion