You've likely heard that Alabama's 2011 football championship trophy was accidentally smashed last weekend by the father of one of the players. Now, as Paul Harvey would have said, for the rest of the story. 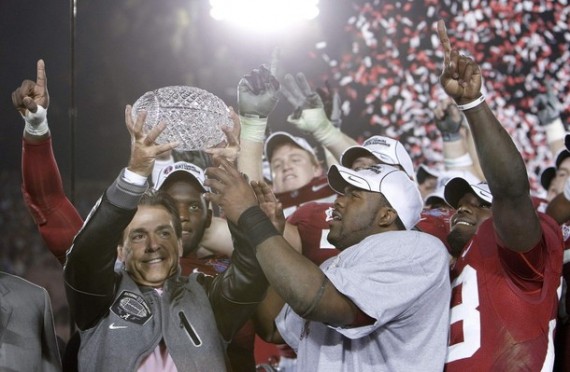 You’ve likely heard that Alabama’s 2011 football championship trophy was accidentally smashed last weekend by the father of one of the players. Now, as Paul Harvey would have said, for the rest of the story.

“I’m not really sure how the thing fell off,” he said.

Carleton and his son, Carson, the Tide’s senior long-snapper, stood along with several other people in the second-floor lobby of the Mal Moore Athletic Facility on Saturday admiring the new trophy, the eight-pound Waterford crystal football valued at upwards of $30,000. Alabama played its A-Day Game on Saturday at Bryant-Denny Stadium, a half-mile or so down Paul W. Bryant Drive.

Carleton Tinker watched several Alabama recruits pick up the trophy to see what it felt like. How could you not? How many people have that opportunity? When the American Football Coaches Association, which awards the trophy, sends it on tour during the season, the trophy has two minders: They allow fans to ogle it, and to have their picture taken with it. But touching is not allowed.

“I didn’t walk away with it,” Tinker said. “I set it back down on the stand and turned to walk away, and had my back away from the trophy when I heard it tumble. So I looked back at it.”

What happened next is a script for one of those old “Wanna get away?” ads that Southwest Airlines ran.

“In my mind, it was slow motion,” Tinker said, “as it rolled off the top of the trophy case onto the table onto the floor. I’m not sure if I bumped the table when I turned around, or if my foot caught on the large tablecloth they had draped and puddled on the floor. That’s exactly what happened.”

Even those of you who aren’t fans of college football may have heard Carson Tinker’s name before. Let’s just say, this isn’t the worst thing to happen to that family this past year.

You don’t have to tell the Tinker family that things happen. A year ago next week, a massive tornado engulfed Tuscaloosa and took the lives of 53 people, including Carson Tinker’s girlfriend, Ashley Harrison.

Carson and Ashley had been huddled in a closet in his house when the storm picked them up and flung them into a nearby field. The physical injuries that Carson suffered — a concussion, a deep gash on his right ankle, a detached ligament in his right wrist — paled before the loss of the woman he expected to marry.

Carson Tinker bounced back, his faith in God stronger than ever. And in the course of a year when his son suffered a low so deep and reveled in the high of winning the BCS Championship, Carleton Tinker found it easy to gain the proper perspective.

“One of the things that we said,” Carleton Tinker said, referring to life after the tornado, “is that we were really going to take everything in and enjoy all of it, the good and the bad. That’s what you do. Take it and go with it, because in the grand scheme of things, even Coach Saban said that, it’s a glass trophy and you can replace it.”

Yes, indeed. I don’t know if the team would have been so philosophical about this if the town hadn’t been ripped apart by that tornado. As it is, though, they’ve got pretty good perspective.

“[Saban] said, ‘Look, he didn’t mean to do it. Nobody was hurt. We’ll get another one,’ ” Carleton Tinker said. “That kind of makes you feel better.”

In the meantime, the new trophy already has been ordered.

“I told them, ‘If you want to put me on the payroll, I can come down and work weekends. We’ll work something out,’ ” Carleton Tinker said.

The athletic department declined his offer.

One suspects that, even if the athletic department didn’t have insurance, they weren’t going to make Carleton Tinker pay for it.