It's all about the Benjamins.

The first filing deadline for the announced Presidential candidates is this Wednesday, but some candidates have already released their figures and The New York Times has this chart: 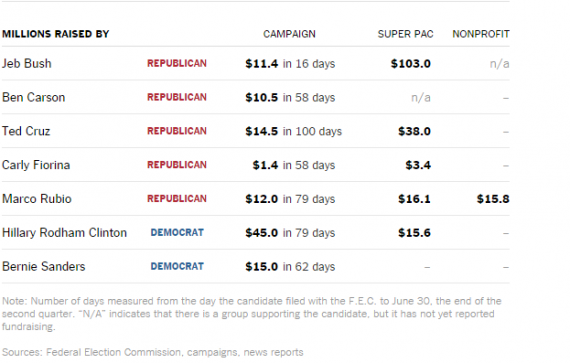 Several candidates have apparently not officially filed their FEC paperwork yet, which is where the Times gets these figures, but have released fundraising totals nonetheless:

Other candidates have yet to release any reports, which is likely an indication that their numbers are disappointing.

A few observations about these numbers:

It costs money to run for President, so these numbers are important. For moment, they show us that the smart money in the GOP is largely being divided between Jeb Bush and and a handful of Republican’s to his right. It is Jeb, however, who is clearly in the lead in that race and he’s likely to remain so as long as continues to be the apparent frontrunner in the race. As was the case with Mitt Romney, most of the money backing Bush comes from the business community and the more “establishment” wing of the party that is more interested in winning an election than pushing and agenda. Because of that, Bush’s access to funds going forward will be secure as long as he continues to appear to be the best hope that party has to win the election in November 2016. If that starts to change, then the money may change with it. For example, Scott Walker’s efforts to walk the line between the GOP’s establishment and its conservative base seems clearly designed on his part to maintain a foot in the first world in case Bush stumbles. Another potential beneficiary in that regard would be Florida Senator Marco Rubio, who many see as Bush’s protege and logical successor as the candidate of the establishment. If Bush doesn’t stumble then, as Romney did in 2012, he’s going to continue to have access to the best fundraising the Republican Party and that’s something that should not be discounted.

On the Democratic side, the story we see from the financial reports is the same one we see in the polls. Hillary Clinton has a tremendous, likely overwhelming advantage over any of her challengers. As the race goes on, I suspect we’ll see the Clinton campaign continue to set new fundraising records quarter after quarter just like Barack Obama did in 2008 and 2012. This is largely a reflection of the fact that, notwithstanding the success of Bernie Sanders in essentially becoming the principal challenger for the nomination, Clinton is seen by basically everyone in the Democratic as the inevitable nominee in 2016, and as the candidate with the best chance of actually winning the election. Sanders is benefiting both from grassroots fundraising and from donations from unions, and that will likely allow to maintain a campaign of some kind going forward well into the primary. However, it’s rather obvious that he’s being viewed even by his supporters not as a potential nominee but as a means of forcing Clinton to address issues such as income inequality that she might have otherwise glossed over. In the end, the Clinton-Sanders race will be nothing like the Obama-Clinton race of 2008 and Sanders himself will likely endorse Clinton in exchange for a prominent speaking slot at the Democratic Convention.