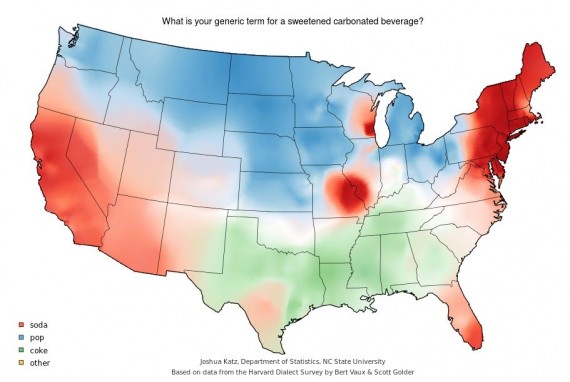 The Soda v. Pop debate has been ongoing for many years, but as Aaron Blake shows us, it’s clear where most Americans stand:

[The map above] comes from North Carolina State University’s Joshua Katz, who has mapped all kinds of dialectical differences between different areas of the country.

One of the most polarizing questions he asks: What do you call a sweetened carbonated beverage?

Nearly half of the country — 47 percent — refers to it as “soda,” while 23 percent say “pop” and another 19 percent go the proper noun route and say “Coke.”

So, there you have it. The debate is over. It’s soda.

As Blake notes, though, the real weirdos are the ones who call it a “soft drink.” They make up just 7% of the population, but they could be anywhere: