Will the incoming "Tea Party" caucus in the House and Senate force the GOP to reconsider its views on foreign policy? Don't count on it. 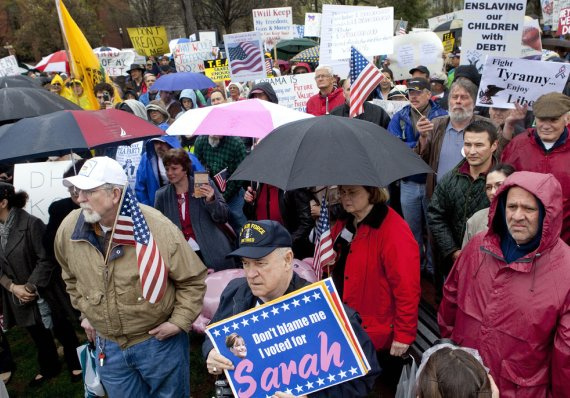 The Cato Institute’s Christopher Preble and John Samples write today about the impact that the Tea Party movement may have on the Republican Party’s views on foreign policy:

With a number of tea party-backed candidates victorious and on their way to Washington, there is much speculation about how they might affect foreign policy. “It’s hard to divine because they haven’t articulated clear views,” explains James Lindsay of the Council on Foreign Relations. “We are left wondering: What exactly would they do?”

The tea party movement has no clear foreign policy agenda. It seems unlikely, however, that the same tea partyers who want the U.S. government to do less at home are anxious to do more everywhere else.

For example, the movement and its new representatives in Washington might prefer to avoid sending U.S. forces into unnecessary and futile wars. Accordingly, they might also realize that substantial reductions in military spending are strategically wise, fiscally prudent, and politically necessary.

Or they might, with very few exceptions, simply become a rubber stamp for the neo-conservative foreign policy that seemed to become GOP policy during the Bush years, as I speculated when I wrote about this issue in October:

Of course, as Preble and Samples point out, the Tea Party movement would seem to be more sympathetic to a less ambitious foreign and military policy if it were to be true to it’s principles:

The nation needs to reconsider its overarching national security strategy as a first step toward limiting military spending. It’s appropriate that we spend money on our military to defend Americans against foreign threats to our lives, liberty, or property. But we spend much more than is necessary for our own security because Washington has chosen to defend other countries that are capable of defending themselves.

The challenge is to rethink what we want the military to do before we start cutting its budget. To make cuts without reviewing our strategic aims would only impose more burdens on our fighting men and women and their families.

But with a more focused foreign policy, such cuts would make sense even if this were an era of surpluses. And in a time when overall spending has to be cut, the Pentagon’s budget needs to be on the table.

The next Congress is likely to go after domestic spending and entitlements, which will be reflexively defended by its left-leaning members. If the tea party is serious about restraining federal spending, the candidates the movement helped elect are going to have to compromise with liberals and moderates. The Pentagon’s budget cannot be held sacrosanct in those negotiations.

Given their attention to fiscal realities and our government’s constitutional obligations, tea partyers are particularly well-suited to lead a movement for more foreign policy restraint and put a brake on global adventurism and massive military spending – hence the preemptive shot across their bow by a few Washington think-tankers.

I wish I could be as optimistic as Preble and Samples are about persuading the incoming “Tea Party” Senators and Representatives of the wisdom of reconsidering the militaristic rhetoric and policy that seems to be so popular in the GOP these days. Surely there will be some new members who will take up that banner (Rand Paul comes to mind most immediately), but for the most part I suspect that Palin, Bolton, and Liz Cheney will be successful in stamping out any talk of reconsidering the GOP gospel when it comes to foreign policy. That’s unfortunate, because this is one area where real change is needed before it’s too late.