The Tea Party movement doesn't seem to have a coherent view on foreign policy. Which means that a Tea Party victory will just mean more of the same Republican neo-conservatism. 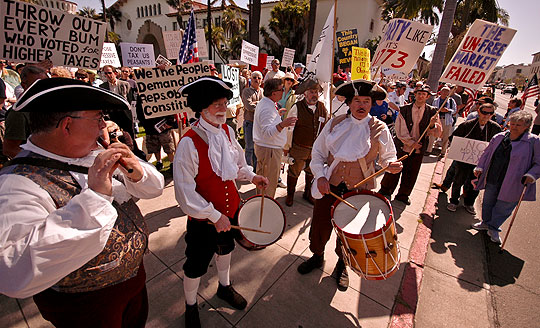 While we’ve heard from the Tea Party movement quite a lot about fiscal issues, that hasn’t been the case when it comes to foreign policy. Partly, that’s because there doesn’t seem to be much unity within the movement on the issue:

In Washington for a rally several weeks ago, the leader of one of the country’s largest Tea Party groups found himself stumped by a reporter’s question.

Asked whether the Tea Party had a foreign policy platform, and if so, what it was, Dick Armey, the founder of FreedomWorks, hesitated only briefly before admitting, “I don’t think so,” and then turning to a colleague to ask, “Do you see a common thread there?”

Pressed on the issue by a reporter, Mr. Armey added, “I would guess there would probably be a lot of different points of view from the candidates on that.”

Indeed there are. Among the more than 100 candidates who claim Tea Party support, opinions about foreign policy range from severely isolationist to unapologetically assertive of America’s role in the world. And in between are many candidates who appear to have spent little time at all thinking about such issues.

It is not an academic question. Dozens of Tea Party-backed candidates could win seats Congress in less than two weeks. In a closely divided legislature, the views of those new representatives could help shape congressional action on trade policy, nuclear treaties with Russia, Middle East peace negotiations and the future of the wars in Iraq and Afghanistan.

“We are all asking, what does it mean for foreign policy? Its hard to divine because they haven’t articulated clear views,” said James M. Lindsay, a senior vice president at the Council on Foreign Relations.

“You can find talking points,” Mr. Lindsay said. “‘We have to go after terrorists.’ But does that mean you want 100,000 troops in Afghanistan? We are left wondering, what exactly would they do?”

There are differences of opinion within the movement, of course:

Some Tea Party candidates appear inclined to follow the lead of one of the movement’s favorites, Representative Ron Paul, Republican of Texas, a former candidate for president. In a recent letter to Foreign Policy magazine, Mr. Paul argued that the same philosophy that drives the economic positions of Tea Party followers should inform their foreign policy thinking.

“As many frustrated Americans who have joined the Tea Party realize, we cannot stand against big government at home while supporting it abroad,” wrote Mr. Paul, father of the Republican Senate nominee in Kentucky, Rand Paul. “We cannot talk about fiscal responsibility while spending trillions on occupying and bullying the rest of the world.”

Dan Benishek, a Tea Party-backed Republican who is running in Michigan’s First District, said in an interview with The Caucus that he still needed to learn more about foreign affairs. But as a parent of a Navy veteran of the Afghanistan war, Mr. Benishek said he thought  America needed to be careful about how it gets involved in wars.

“My basic position is that I don’t think we should be putting boots on the ground without having a declaration of war,” Mr. Benishek, whose daughter served in Afghanistan, said. “We’ve gotten ourselves into a lot of things that I don’t think they are the right things.”

But for every Dan Benishelk and Ron Paul, there seem to be dozens of Christine O’Donnell’s and Sharron Angle’s, and it seems quite clear that when it comes to foreign policy at least, the Tea Party will just be more of the same Republican jingoism.