The Donald Trump presidency has some eerie parallels with his run on "The Apprentice." 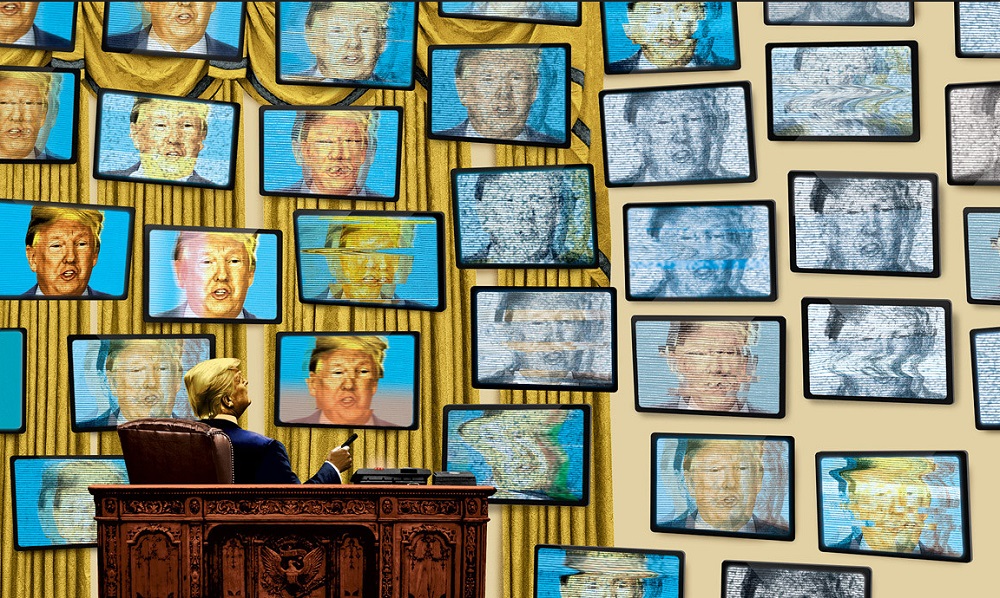 Michael Kruse‘s POLITICO Magazine piece “How the Trump Show Gets Old” has a brilliant premise: The Trump presidency is proceeding exactly like the reality television program that catapulted him to the Oval Office.

On September 20, 2004, the director of the Museum of Television & Radio in Los Angeles welcomed a packed crowd to an evening discussion “featuring the two people responsible for giving television audiences across America a mesmerizing cultural phenomenon. … Just having launched its second season, ‘The Apprentice’ promises once again to be the water-cooler show that has everybody talking.” The panelists on the stage were Donald Trump, the face of the show, and Mark Burnett, its maestro producer. And the moderator of the event, of note only because of the chucklehead-sidekick role he would play 12 years later during Trump’s presidential campaign, was “Access Hollywood” host Billy Bush.

“This show is amazing,” Bush said, cueing up a frenetic montage of highlights, in which Trump snarled, “This is a dictatorship, and I’m the dictator. There’s no voting. There’s no jury.” The audience clapped.

Most of the rest of the discussion was fawning and unsurprising—until the 41-minute mark. That’s when Bush pointed out an uncomfortable numerical fact: Some 40 million people had watched parts of the first season finale. For the first episode of the second season, though, that number had plummeted.

The purpose of the question was to assess the staying power of public interest in Donald Trump. And though Bush could not have known it at the time, the drop-off he had identified would continue every season thereafter. “The Apprentice”was a hit right away, shockingly successful by anybody’s account—but by the time of this panel discussion, barely into season two, it had already peaked. Interest in Trump’s show would never again approach its original heights.

The parallel is uncanny.

Now, a decade and a half later, having Transformered from reality-TV character to the most geopolitically crucial human on the planet, Trump finds himself in a similar situation. It’s possible that no president in history has had such a grip on public attention in his first year. But now it’s year two, and life in the time of Trump has settled somewhat into a bizarre kind of routine. Articles don’t always go viral just because his name’s in the headline (his name’s in practically every headline). He is tweeting more often, and with more truculence, but not always garnering as much notice. His campaign rallies aren’t the must-see circuses they once were, and he certainly doesn’t generate much enthusiasm for the candidates he’s there to support. His approval ratings are holding far steadier than “Apprentice” viewership did, but it’s hard to say the same about public attention. A year of intense, anxiety-laced interest in his every act has given way to eye rolls, exhaustion or both.

What does this portend?

The relentless decline of “The Apprentice” reflects a splash-and-crash cycle that’s been a hallmark throughout Trump’s life—from his buildings to his casinos to even his brief stint as a sports team owner. His initial successes are often followed by reckless decisions to double down on his bet, just to keep the excitement going—with often disastrous results. “It’s true of everything he goes into,” Trump biographer Tim O’Brien said in an interview. “He will hunker down and do something well—and then he thinks he’s Zeus.” And that’s when the trouble starts. “Because he’s not Zeus.”

Nowhere was that clearer than his attempt to goose the ratings for his hit show. Even as its numbers dipped, he insisted it was still on top; he picked fights with critics and blamed others; and maybe most notably, he took on an even bigger role. Rewatching the first season of “The Apprentice,” he is the star—no question about that—but it’s surprising how infrequently he appears; he introduces the tasks, and then mostly vanishes as his teams bicker and compete until the climactic boardroom scenes when he fires somebody. But in the second season, things change. There’s less team, more Trump. He makes more appearances in the middle, and the boardroom scenes are longer. And it’s not only that he’s there more. The volume is turned up. He’s meaner. More performative. There are more soaring shots of his plane. More over-the-top shots of his scowl. It’s hard to quantify, but it’s hard to miss, too.

And now, in the White House? Fueled by a cocktail of attention and unease, Trump’s taking more control, or trying to—dispensing with advisers, ignoring briefings, stoking plot twists and turns, feeding TV as surely as he’s fed by it. Trade wars! Talks with Kim Jong Un! Who’s next to get the ax? This is the first time he’s been president, but he has been here before—trying to rescue a second season, emboldened but threatened. And Trump is nothing if not a man, instinctive and impetuous, who’s wedded to his habits.

Kruse then goes on to argue that the pattern goes back much further:

By the time 2004 rolled around, Trump’s record of sophomore slumps was long and clear. Trump Tower, opened in 1983, the first structure Trump erected from the ground up, was and remains his finest work; he never could put together his most ambitious intended sequel, the sprawling “Television City” project, instead getting mired in a bitter personal feud with New York Mayor Ed Koch. Ditto in the publishing world: His first book, The Art of the Deal, remains his biggest seller; the many others feel increasingly like cut-and-paste, score-settling knockoffs. In Atlantic City, the crippling spate of Chapter 11 bankruptcies didn’t start until he overextended. The Trump Plaza and Trump’s Castle, his first two casinos, opened back-to-back in 1984 and 1985, respectively, and performed decently. But by the launch of the Taj Mahal, finished in 1990, Trump was burdened by debt, which hastened the troubles. Even his sideline investments stumbled in year two: Trump owned the New Jersey Generals in the start-up United States Football League for three seasons, during which they went 14-4, then 11-7, then didn’t play at all, because the league collapsed when Trump spearheaded an ill-advised antitrust suit against the NFL.

Before the debut of “The Apprentice,” the Trump splash-and-crash cycle had settled into something of a stasis—not a low point so much as a lull. The Art of the Deal was 17 years old. Even The Art of the Comeback, published in 1997, had turned stale, forgotten. Following his zeitgeist-appropriate excesses of the 1980s, his personal and financial failures of the early ’90s didn’t stop him—but they did stain him. Serious people didn’t take him seriously. Kwame Jackson joined the first cast of “The Apprentice” after a job at Goldman Sachs. On Wall Street, Jackson told me, Trump was considered a “charlatan” and a “clown.” In the words of New Yorker TV critic Emily Nussbaum, Trump was seen at this juncture as “less an icon than … a retro cartoon.” As much as his reality show helped “save” NBC—the network was desperate for a hit with “Friends” about to end—it’s at least as true that NBC helped save Trump. The sudden, smashing success of “The Apprentice” seemed to surprise even him.

The first episode of the second season dropped off 24 percent compared with the opener of the first season. “Season one of ‘The Apprentice’ was a rip-roaring success,” Bob Thompson, a professor of television and popular culture at Syracuse University, told me. Season two was not. “The slide was pretty precipitous.”

Rewatching that season, it’s the same basic formula, only amped-up.

It’s more crass. (In one episode, a male contestant suggests to another male contestant that he should fellate a foursome of gay diners so they can get a better review at the restaurant they’re “running.”) It’s more frying-pan-to-the-face unsubtle. (When a group of winners gets as its reward a caviar dinner, one of them spells it out for the most dimwitted viewers: This is “a metaphor for the lifestyle of Donald Trump.”) It’s more heavy-handed with its conflation of Trump and country. (In the first season, winners got in a helicopter in one episode for a spin past the Statue of Liberty; in the second, the first show’s opening sequence crests with Trump literally standing at the base of the statue. Later, winners ride by, on the gargantuan Queen Mary 2, while belting out “America the Beautiful.”)

But the biggest, most substantive difference, between the first season and the second is Trump himself. This was a decision of the makers of the show, but Trump had no trouble playing the part. He’s angrier. He’s more overtly omnipotent. As a character, he’s simply more there. (“Rhona,” he says to his secretary, Rhona Graff, talking into the phone in the rear of his limousine, “cancel that meeting—I’m going over to Mattel.”) And it’s how he’s presented. Watching the 15 episodes for this story, I found some season two scenes so stunning in light of the past three years of Trump’s political ascendance that I had to hit rewind and watch them again. In the first episode, when he shows up unexpectedly at Mattel, he walks into the shot, his back to the camera, the silhouette of his hair pronounced, and the sound the show’s editors pipe in is a cross between pixie dust and tinkling bells, like Trump is some blend of superhero and potentate. Throughout, there’s a level of reverence, of obsequiousness, that’s just not there in season one. In numerous season two episodes, when Trump sits down to deliver one of his business tips, the glowing, orange-peach-marble backdrop in the lobby of Trump Tower is so similar to many of the TV interviews he did during his 2016 campaign that practically the only thing missing is Anderson Cooper. And when he assigns the teams a task in some episodes, he arrives—to a fanfare of royal trumpets—by slowly descending to the lobby on that gold escalator.

There’s a whole lot more and it’s worth reading in full.

That Trump’s presidential campaign was straight out of a reality television program was a common observation but one that didn’t much resonate with me because I’m just not a fan of that genre. I’ve never watched an episode of “The Apprentice” or its spin-offs. I remembered the Trump of the USFL days—I was a big fan of that league and watched most of the New Jersey Generals games since they had Herschel Walker and vaguely remember his various television appearances promoting Art of the Deal and the like. I’d largely lost track of him in the decades afterward. I knew that he hosted “The Apprentice,” of course, but all I know about that show was that it featured the catch-phrase “You’re fired!” and had someone named Omarosa on it. And I was vaguely aware that he’d flirted running for president a few times and was flogging the Birther slurs against President Obama.

Once he actually launched his 2016 campaign, it became almost immediately obvious that he was a crass, racist buffoon. But I spent months thinking that it was all a publicity stunt rather than a serious bid for the office. I’m still not wholly convinced that it wasn’t and the plot just went off the rails. 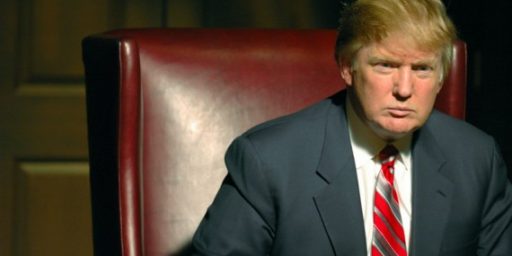