Samuel Huntington has a piece by that title in the current Foreign Policy.

The persistent inflow of Hispanic immigrants threatens to divide the United States into two peoples, two cultures, and two languages. Unlike past immigrant groups, Mexicans and other Latinos have not assimilated into mainstream U.S. culture, forming instead their own political and linguistic enclavesÃ¢€”from Los Angeles to MiamiÃ¢€”and rejecting the Anglo-Protestant values that built the American dream. The United States ignores this challenge at its peril.

America was created by 17th- and 18th-century settlers who were overwhelmingly white, British, and Protestant. Their values, institutions, and culture provided the foundation for and shaped the development of the United States in the following centuries. They initially defined America in terms of race, ethnicity, culture, and religion. Then, in the 18th century, they also had to define America ideologically to justify independence from their home country, which was also white, British, and Protestant. Thomas Jefferson set forth this Ã¢€œcreed,Ã¢€ as Nobel Prize-winning economist Gunnar Myrdal called it, in the Declaration of Independence, and ever since, its principles have been reiterated by statesmen and espoused by the public as an essential component of U.S. identity.

By the latter years of the 19th century, however, the ethnic component had been broadened to include Germans, Irish, and Scandinavians, and the United States’ religious identity was being redefined more broadly from Protestant to Christian. With World War II and the assimilation of large numbers of southern and eastern European immigrants and their offspring into U.S. society, ethnicity virtually disappeared as a defining component of national identity. So did race, following the achievements of the civil rights movement and the Immigration and Nationality Act of 1965. Americans now see and endorse their country as multiethnic and multiracial. As a result, American identity is now defined in terms of culture and creed.

Most Americans see the creed as the crucial element of their national identity. The creed, however, was the product of the distinct Anglo-Protestant culture of the founding settlers. Key elements of that culture include the English language; Christianity; religious commitment; English concepts of the rule of law, including the responsibility of rulers and the rights of individuals; and dissenting Protestant values of individualism, the work ethic, and the belief that humans have the ability and the duty to try to create a heaven on earth, a Ã¢€œcity on a hill.Ã¢€ Historically, millions of immigrants were attracted to the United States because of this culture and the economic opportunities and political liberties it made possible.

Contributions from immigrant cultures modified and enriched the Anglo-Protestant culture of the founding settlers. The essentials of that founding culture remained the bedrock of U.S. identity, however, at least until the last decades of the 20th century. Would the United States be the country that it has been and that it largely remains today if it had been settled in the 17th and 18th centuries not by British Protestants but by French, Spanish, or Portuguese Catholics? The answer is clearly no. It would not be the United States; it would be Quebec, Mexico, or Brazil.

In the final decades of the 20th century, however, the United States’ Anglo-Protestant culture and the creed that it produced came under assault by the popularity in intellectual and political circles of the doctrines of multiculturalism and diversity; the rise of group identities based on race, ethnicity, and gender over national identity; the impact of transnational cultural diasporas; the expanding number of immigrants with dual nationalities and dual loyalties; and the growing salience for U.S. intellectual, business, and political elites of cosmopolitan and transnational identities. The United States’ national identity, like that of other nation-states, is challenged by the forces of globalization as well as the needs that globalization produces among people for smaller and more meaningful Ã¢€œblood and beliefÃ¢€ identities.

Ã¢€œCultured, intelligent, and often possessing impressive degrees from some of America’s premier colleges and universities, this new breed of white racial advocate is a far cry from the populist politicians and hooded Klansmen of the Old South,Ã¢€ writes Carol Swain in her 2002 book, The New White Nationalism in America. These new white nationalists do not advocate white racial supremacy but believe in racial self-preservation and affirm that culture is a product of race. They contend that the shifting U.S. demographics foretell the replacement of white culture by black or brown cultures that are intellectually and morally inferior.

Changes in the U.S. racial balance underlie these concerns. Non-Hispanic whites dropped from 75.6 percent of the population in 1990 to 69.1 percent in 2000. In CaliforniaÃ¢€”as in Hawaii, New Mexico, and the District of ColumbiaÃ¢€”non-Hispanic whites are now a minority. Demographers predict that, by 2040, non-Hispanic whites could be a minority of all Americans. Moreover, for several decades, interest groups and government elites have promoted racial preferences and affirmative action, which favor blacks and nonwhite immigrants. Meanwhile, pro-globalization policies have shifted jobs outside the United States, aggravated income inequality, and promoted declining real wages for working-class Americans.

The chance that California whites will react like Bosnian Serbs is about zero. The chance that they will not react at all is also about zero. Indeed, they already have reacted by approving initiatives against benefits for illegal immigrants, affirmative action, and bilingual education, as well as by the movement of whites out of the state. As more Hispanics become citizens and politically active, white groups are likely to look for other ways of protecting themselves.

Industrialization in the late 19th century produced losses for U.S. farmers and led to agrarian protest groups, including the Populist movement, the Grange, the Nonpartisan League, and the American Farm Bureau Federation. Today, white nativists could well ask: If blacks and Hispanics organize and lobby for special privileges, why not whites? If the National Association for the Advancement of Colored People and the National Council of La Raza are legitimate organizations, why not a national organization promoting white interests?

White nationalism is Ã¢€œthe next logical stage for identity politics in America,Ã¢€ argues Swain, making the United States Ã¢€œincreasingly at risk of large-scale racial conflict unprecedented in our nation’s history.Ã¢€ The most powerful stimulus to such white nativism will be the cultural and linguistic threats whites see from the expanding power of Hispanics in U.S. society.

There are eleven pages between those passages, which open and close the piece.

Huntington is correct both that the U.S. would have–by definition–developed differently had it not been primarily populated by those from northwestern Europe in its earlier days and that the massive growth of the Hispanic population will create internal conflict. But I’m not sure how this is radically different than the waves of Germans, Italians, Koreans, Vietnamese, and others that we’ve managed to absorb in the past. They all started off living in ethnic enclaves and all more or less assimilated into American culture. I can’t imagine that the children of these Hispanic immigrants aren’t by and large going to learn English and try to meld into society. The incentives all point them in that direction.

Of Groceries, Negroidals, and Creeds 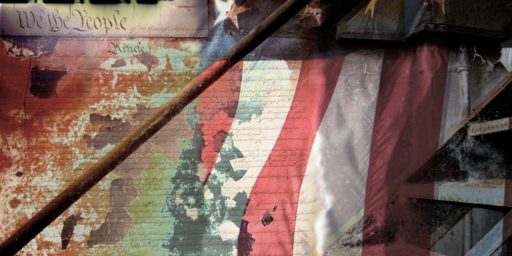 What is American Patriotism?