Time To Scale Back The Inaugural Pomp And Circumstance?

We really don't need to be treating Inauguration Day like it's the coronation of a new King. 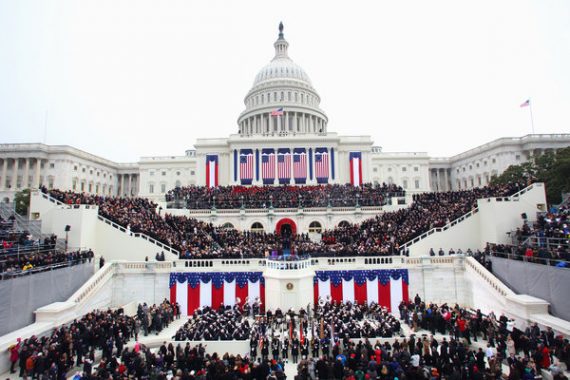 Steven Taylor made some comments earlier today about the Presidential Inauguration that brought to mind a series of conversations I’ve been having over the past day or two about the way that we treat our Presidents, specifically as symbolized by the pomp and circumstance surrounding Inaugurations, although one can see similar ridiculousness during the State Of The Union Address, a subject that I’ve written about before. In short, it strikes me that the modern Inauguration Ceremony, which is far different from the way things were done in the past, places far too much of an air of monarchism around the Presidency. In some sense, perhaps, this is just a reflection of the fact of life that is the modern Imperial Presidency. We are long past the day where the President was the accessible person that he was even as recently as the 1920’s. Today, thanks in no small part to the fact of life of the National Security State, as well as the fact that real threats against Presidents have led to the creation of the most impenetrable security bubble in human history, the President simply can’t be considered on an equal footing with his (or, in the future, her) fellow Americans. Indeed, there are privileges and protections granted to modern American Presidents that would make the English Monarchs whom we rebelled against seem positively democratic by comparison.

Consider this simple fact. President Washington’s second Inaugural Address ran just about 140 words. President Lincoln’s 2nd Inaugural, considered by most historians to be the most historically significant Inaugural Address in American history, came to 703 words. Today’s speech by President Obama came to just over 2,000 words, and that’s actually relatively brief by modern Inaugural standards, although, admittedly, no President has matched William Henry Harrison’s 90 minute Inaugural Address in 1841. The fact that Harrison died 30 days after giving that speech is probably a good reason for that. In any event, Obama’s 2,000 or so words are actually kind of brief in modern history. Still, it’s an indication of just how, well, regal,  the Inauguration Ceremony has become.  Other indications of this can be seen in the  various ceremonies that surround the entire event. The announcements of the presence of “noted” people. The ruffles and flourishes from the Marine Corps Band. Indeed, the playing of “Hail To The Chief” and 21 gun salute itself. These are not, I would submit, the traditions of a healthy democratic republic. They are the actions of a nation obsessed with celebrity on both the political and the cultural level. We shouldn’t think that the President is better than us, or entitled to any more respect than the average human being. That seems to me to be only one or two steps removed from the idea that the leader of the nation has been selected by God to lead us, and that we must obey.

I’m not suggesting doing away with Inauguration Ceremonies entirely. We’ve been swearing in Presidents on the steps of the Capitol Building pretty much since the Capitol Building has existed. What I am suggesting is that much of aura of regal-ness and self-importance that days like today tend to convey should be scaled back significantly. It would be good for the country in the long run.