A new report says that the Trump Administration lobbied the National Park Service to edit photos of the crowd at President Trump's Inauguration. 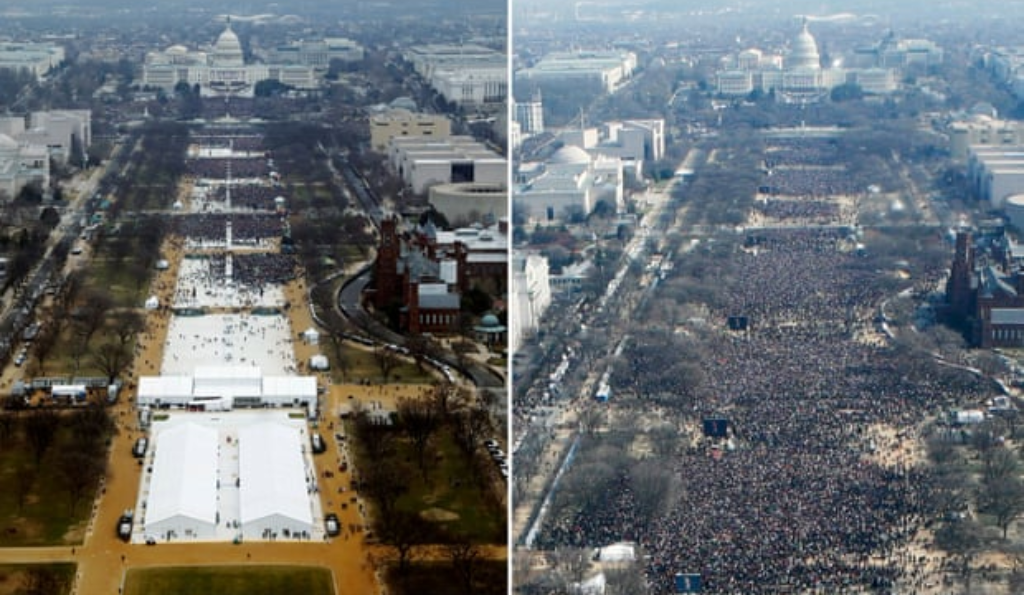 One of the more bizarre things about the early days of the Trump Administration was the extent to which the President was obsessed with the size of the crowd for his swearing-in and Inaugural Address, and how sensitive he was to the rather obvious comparisons that were made between his crowd and those that President Obama attracted in 2009 and 2013. The Administration was barely in office for twenty-four hours and it was already putting forward the obviously false claim that his crowds were the largest Inaugural crowd ever, a lie the President repeated that same day as he stood before the memorial wall at CIA Headquarters that memorializes the men and women who have died as part of the clandestine service. Now, The Guardian reveals that the Administration and the President lobbied the National Park Service to edit the crowd photos to make Trump’s crowd appear to be larger than it actually was:

A government photographer edited official pictures of Donald Trump’s inauguration to make the crowd appear bigger following a personal intervention from the president, according to newly released documents.

The photographer cropped out empty space “where the crowd ended” for a new set of pictures requested by Trump on the first morning of his presidency, after he was angered by images showing his audience was smaller than Barack Obama’s in 2009.

The detail was revealed in investigative reports released to the Guardian under the Freedom of Information Act by the inspector general of the US interior department. They shed new light on the first self-inflicted crisis of Trump’s presidency, when his White House falsely claimed he had attracted the biggest ever inauguration audience.

The records detail a scramble within the National Park Service (NPS) on 21 January 2017 after an early-morning phone call between Trump and the acting NPS director, Michael Reynolds. They also state that Sean Spicer, then White House press secretary, called NPS officials repeatedly that day in pursuit of the more flattering photographs.

It was not clear from the records which photographs were edited and whether they were released publicly.

The newly disclosed details were not included in the inspector general’s office’s final report on its inquiry into the saga, which was published in June last year and gave a different account of the NPS photographer’s actions.

By the time Trump spoke on the telephone with Reynolds on the morning after the inauguration, then-and-now pictures of the national mall were circulating online showing that Trump’s crowd fell short of Obama’s. A reporter’s tweet containing one such pair of images was retweeted by the official NPS Twitter account.

An NPS communications official, whose name was redacted in the released files, told investigators that Reynolds called her after speaking with the president and said Trump wanted pictures from the inauguration. She said “she got the impression that President Trump wanted to see pictures that appeared to depict more spectators in the crowd”, and that the images released so far showed “a lot of empty areas”.

The communications official said she “assumed” the photographs Trump was requesting “needed to be cropped”, but that Reynolds did not ask for this specifically. She then contacted the NPS photographer who had covered the event the day before

The newly released files said Spicer was closely involved in the effort to obtain more favourable photographs. He called Reynolds immediately after the acting director spoke with Trump and then again at 3pm shortly before the new set of photographs was sent to the White House, investigators heard. Another official reported being called by Spicer.

At about 5.40pm that day, Spicer began a now notorious press briefing at the White House in which he falsely stated: “This was the largest audience to ever witness an inauguration – period.” A spokeswoman for Spicer did not respond to a request for comment.

As I’ve said on other occasions in the past, the arguments about crowd sizes at events in Washington have been long-standing. Whether its a march or some other event, the group holding the event almost always tries to claim that crowd size is larger than it might appear. In the past, the National Park Service and other government agencies have found themselves in the middle of these arguments, but that’s largely not been the case ever since the NPS stopped releasing official crowd-size estimates for events, as have other entities such as the District of Columbia’s Metropolitan Police Department. For the most part, though, this has not stopped organizations and Administrations from citing crowd size as an estimate of their support.

The difference in this case, though, is that the Administration’s claims are demonstrably untrue and yet it chose to make it the first hill to die on and the first battle to have with the press. It was false, for example, for Sean Spicer to claim that the original photographs of Obama’s Inauguration in 2009 and Trump’s were intentionally framed to make Obama’s crowd seem larger and Trump’s smaller. In reality, the photograph of the crowd from Trump’s Inauguration had come directly from the Inaugural ceremonies committee that was largely staffed by Trump supporters and that the photograph from 2009 came from Getty Images and is a matter of historical record. Second, his claims about ridership on Washington’s Metro system, which provides the most direct access to the National Mall for events such as this and which is often used as a rough corollary to estimate crowd size, were similarly false. By 11 am on Inauguration Day 2017, just an hour before Trump took the Oath Of Office, the system says that 193,000 people had ridden the Metro that morning; this compared to the 513,000 riders the system saw in 2009 and the 317,000 it was for Obama’s Second Inaugural in 2013. In fact, the numbers for Trump were slightly lower than the 197,000 riders the system had by 11 am on the morning of George W.  Bush’s Second Inaugural. (Source and Secondary Source) By way of contrast, the ridership numbers for the anti-Trump march in Washington. D.C. that took place the day after the Inauguration far exceeded those for any Inauguration, reaching more than one million for the entire day and making January 22, 2017, the second busiest day ever. The busiest full day of ridership for Metro, incidentally, was Obama’s first Inauguration. (Source)  Even taking into account the fact that many people who attended the Inauguration may have driven in or taken chartered buses, these numbers, this would seem to make it obvious that Trump’s ceremony had a smaller audience than any since 2004  at the very least.

All of this makes the way the Administration acted the day after the Inauguration troublesome both in and of itself and because of what it tells us about what the future is likely to portend for at least the next four years. Not only did the President and his chief spokesperson, who was no doubt acting under the direct orders of the President when he spoke, spend most of the first day in office talking about something as trivial as the size of a crowd on the National Mall, but they were blatantly lying in the process. President Trump started the lies with his speech at the CIA, where he claimed that he had never attacked the intelligence community even though his Twitter feed during the time the stories about Russian efforts to influence the election is full of such attacks and he had made comments critical of the CIA and other intelligence agencies while campaigning for President. That speech also included his bizarre for the location decision to attack the media over alleged misrepresentations about the Inauguration crowd size and did so on what is supposed to be solemn ground in front of a wall memorializing men and women who have died in service to their country. Then he sent out his chief spokesperson on his first day before the media to repeat those blatant lies, and add a few more while refusing to answer any questions from the media that might have pointed out just how egregious these misrepresentations were. None of this should come as a surprise to anyone who followed Trump’s campaign, of course, but it is nonetheless troubling to see it actually happening.

Now, added on top of all of this we have this new evidence of just how far the Administration was willing to go to appease the President’s ego with this lie. Based on this report, it’s clear that Administration was willing from its very first day in office to not only lie but to effectively act to change evidence to support that lie. If they’re willing to alter photographs to support a stupid lie about crowd size then who knows what else they might be willing to change to support those claims,

The night all of this happened, I asked a simple question on Twitter:

If the Trump Administration is going to lie about crowd sizes, and it did, then how can we trust it on stuff that actually matters?,

Twenty months later, we know the answer to that question, of course, The President is a habitual liar to the point where it’s been calculated that he tells an average of eight lies per day, a rate that puts him on pace to have told more than 11,600 lies by the end of his first term and more than 23,000 lies by the time a second term would end. Many of them have been small lies, but a good number of them have been quite big. And they’ve left us with a world where we cannot trust anything this White House says. Sooner or later, that’s going to be a problem that’s not only depressing, but dangerous.