Former White House Press Secretary Sean Spicer poked fun at himself on last night's Emmy broadcast, and the political pundits are all in pearl-clutching mode because of it. 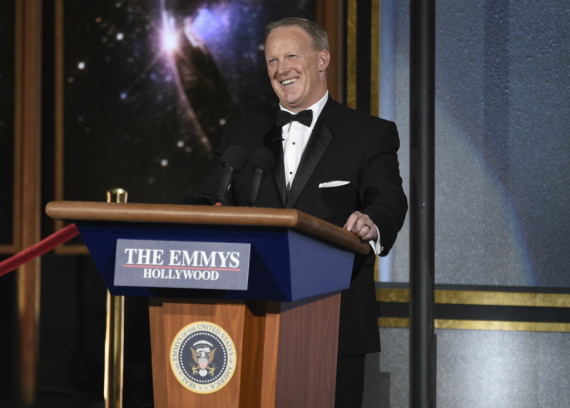 During his opening monologue on last night’s Emmy Awards, Stephen Colbert brought out a familiar face:

It was not the cameo you might have expected to see.

In Stephen Colbert’s opening monologue of the Emmys, as he unleashed a series of jokes aimed at President Trump, he brought the former White House press secretary Sean Spicer onto the stage. No, not Melissa McCarthy, who famously portrayed him on “Saturday Night Live” — it was the real Sean Spicer, rolling out a mock pressroom lectern.

“This will be the largest audience to witness an Emmys, period,” he said. “Both in person and around the world.”

“Wow, that really soothes my fragile ego,” Mr. Colbert responded. “I can understand why you would want one of these guys around.”

It was, you might remember, a callback to Mr. Spicer’s statement that Mr. Trump’s inauguration featured “the largest audience to ever witness an inauguration,” a claim easily disproved by photos.

Mr. Spicer, who famously sparred with journalists from the White House press room, resigned as press secretary in July. He had stayed out of the public spotlight since then, but then he appeared on Jimmy Kimmel last week. He largely stood by President Trump during that appearance and said he thought Ms. McCarthy’s impression of him was “kind of funny.”

I didn’t watch the show last night, not for any particular reason just basically because I don’t really care about back-slapping by a bunch of entertainers and there was a football game on at the same time anyway. The Spicer clip has been all over the morning news, though, and political pundits are talking all about it, mostly negatively. What Mediaite calls “Blue Check Twitter,” which basically refers to journalists and pundits who have active Twitter accounts, wasn’t very pleased by the whole thing, apparently, CNN’s Brian Stelter also seems unhappy with the bit. And Slate’s Christina Cartalucci called it “a sickening, cynical laugh grab”:

It was a sickening, cynical laugh grab, a fantastic “get” that was probably meant to make the Emmys look good for convincing someone other than an entertainment industry star to show up for a gag. But the main beneficiary of the joke was Spicer. America has barely heard from him since he left the administration at the dawn of the Mooch era, his brief and disastrous turn in the spotlight was very much over. Sunday’s sketch brought Spicer back into the public consciousness as an affable pal who’s in on the joke. If he, like us, sees the humor in the lies he spread and the aggressive attacks on the press he led, he can’t be all that bad, right?

Giving Spicer a platform for reputation rehabilitation belongs in the same category as Trump hosting Saturday Night Live during his campaign and Jimmy Fallon mussing the candidate’s hair on his show. To include members of a racist, xenophobic administration in light-hearted comedy bits is to obscure the depth of the harm they do. When people see Spicer or Trump as good sports with the maturity to laugh at themselves, Spicer and Trump become a little more “normal,” a little less “men with no shame or experience who stole the presidency and have threatened the very tenets of democracy.”

“This will be the largest audience to witness the Emmys, period—both in person and around the world,” Spicer said from his podium on Sunday, riffing on his obviously false claim that Trump had the most-viewed inauguration of all time. Colbert’s comedy routine let Spicer spin that statement as a kind of joke—not the first blatant lie of the Trump presidency, a deliberate whopper that immediately put an end to whatever responsibility the presidential press secretary once had to hew reasonably close to easily verifiable facts. When McCarthy played Spicer, audiences could come to terms with Spicer as an anti-freedom-of-the-press press secretary by laughing at him. Laughing with him only dulls the senses to his deeds.

The joke, which Spicer at least partly blew because he failed to wait for the crowd’s reaction to his presence to die down, was apparently supposed to work on multiple levels. One of them, ironically, seems to have been Colbert poking fun at the Emmys themselves because there is absolutely no way that the show was the highest-rated version ever. In fact, for a variety of reasons, including politics, it was far more likely to be the LEAST watched Emmys in history.

Of course, the more significant element of this gag is that Spicer was essentially making a joke about both Trump’s Inauguration Day delusions as well as effectively admitting that he knowingly lied to everyone in his very first press event. In a sense, he was turning his entire tenure and the Trump Administration itself into one giant joke.

Now, to be clear, I am no stick in the mud. I like a good bit of humor as much as anyone. I also recognize that the best way to deal with a major media mistake is usually to joke about it in a self-deprecating manner.

It is important to remember, however, that this was not some “gaffe” that Spicer was teasing us about. He didn’t make his “crowd” statement that day because of an accident or honest mistake. This lie was done by design, exactly as directed by president Trump.

Think about what Spicer did here. He admitted, while making a big joke out of the whole episode, that on his very first day on a job where he was paid by the American taxpayers to speak on behalf of the president of the United States, he knowingly said something significant (with great angry, even) which he knew to be literally laughably false.

And the crowd of Hollywood liberals loved it.

The implications of this are actually pretty profound. If even the presidential spokesman can, with great passion, blatantly lie to the American people and then be forgiven/rewarded and “get out of jail free” by simply pretending that it was all just a frivolous joke, then who or what exactly keeps something like this from happening in the future on a topic more substantial than crowd size?

When Spicer exited as press secretary, I wrote about how this kind of thing should not be normalized. Spokesmen have a duty to represent their bosses and toe the company line, but they also have a duty to do so believably and with some regard for the truth. There are shades of gray, and then there is laughing at flouting the truth, which is what Spicer did Sunday night. When spokesmen do that, dismissing their falsehoods only serves notice to other spokesmen that they needn’t worry about being credible.

Spicer served Trump for more than six months — a period in which he was repeatedly dispatched to say things that strained credulity and were found to be false. When the media and the American people give spokesmen no compunction about doing that — and suggest that one day it could all be laughed off — the falsehoods will only multiply.

On some level, I see the point that Blake and the others who reacted negatively to the bit are trying to make. For the six months that he was Press Secretary Sean Spicer attempted to make credible the obvious falsehoods that came out of the White House in general and the President’s Twitter account in particular on a regular basis. In many cases, this went above and beyond the normal spinning that we have become used to seeing from spokespersons for politicians for decades now and ventured into plain old out-and-out lying. It all began, of course, on Spicer’s first full day on the job as Press Secretary when, apparently on the direct orders of the President himself, went in front of television cameras and repeated obviously false claims about the size of the crowd at the Inauguration the previous day. This set the tone for much of the rest of Spicer’s tenure at the White House, and for the manner in which the entire Trump Administration has dealt with the media ever since, with the only notable exceptions to this rule being Trump outsiders such as Secretary of Defense James Mattis and National Security Adviser H.R. McMaster. Turning all of that into a laughing matter does seem distasteful on some level.

At the same time, though, I’ve got to say that I found the bit to be pretty funny and entertaining as well as something of a tacit admission on Spicer’s part that he realizes the extent of just how egregious the Trump Administration has been since taking office. Both here and in his appearance on Jimmy Kimmel’s show last week, Spicer seems to clearly understand that he’s damaged his own credibility by letting himself be turned into a mouthpiece for an inveterate liar, even if he isn’t coming out an openly opposing the President at this point. Additionally, as I noted on Twitter this morning, there comes a point where political pundits need to just step away from the keyboard and not turn everything into a reason for a blog post, column, or outrage Tweet. A bit that lasted just over a minute on a self-congratulatory awards show seems like a good a place as any to start following that advice.

Or, as the Platoon Leader in Stripes put it: