Last night's Republican debate had a different feel with the absence of a certain bloviating narcissist. 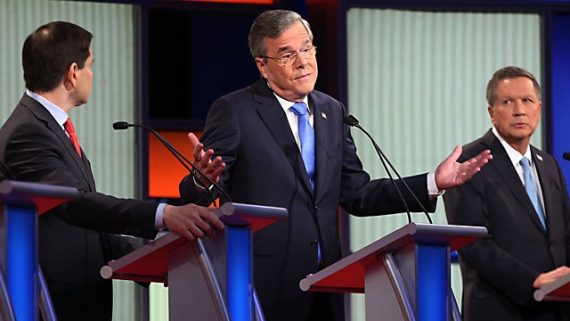 I watched a few minutes of the undercard debate last night after former Virginia Governor Jim Gilmore started generating a buzz among my Twitter sources. I quickly lost interest.

I gave up on the second debate around the 10pm hour, both because I grew tired of Megyn Kelly and because I had been up since 430am. The dynamic was much improved with Donald Trump across town. Ted Cruz did a passable imitation of a human being for the first few minutes, although he soon reverted to form. Job Bush certainly seemed more relaxed, but still awkward. Rand Paul managed to get a word in edgewise and not come across as a kook. No one else really made an impression on me, coming across as either non-factors or simply confirming my impressions from the previous ninety-seven debates.

Bush and John Kasich remain the two candidates from the group that I’d most like to see become president. But neither has struck me as a good in these weird “debates.” Interestingly, some observers are either seeing something different or seeing what they want to see.

The winner of Thursday’s Republican debate was. . .Jeb Bush?

This is the first time in the GOP presidential race in which the candidate who was the most credible on the issues also won the debate. Maybe Donald Trump’s absence gave Bush a confidence boost — or at least permitted him to get a word in edgewise. Perhaps Bush, with little to lose at this point, relaxed. Or maybe he is just more polished after months of campaigning. Whatever the reason, he spoke with more conviction and dominated the stage at several points in the debate. And he used some of those moments to bring policy specifics and high principles into an otherwise dismal conversation.

While the other candidates pretended that pumping up the military, ranting about “radical Islamic terror” and ordering saturation bombing is a strategy to defeat the Islamic State, Bush called for pumping up the military — but also establishing a no-fly zone, creating safe zones for refugees and training a Sunni ground force to retake territory. (In truth this is roughly what Hillary Clinton wants to do, but no one pointed that out, so it was safe to propose.)

Bush once again bucked the other candidates’ disgusting embrace of Trumpism, arguing for offering illegal immigrants a path to legalization. But he may have turned that into a tactical as well as moral victory as he and the moderators pointed out that Marco Rubio and others on stage supported a pathway to legalization, too — or at least had before running for president. Rubio, he said, “cut and run” when the politics got hard. Rubio looked like a crypto-amnesty supporter and a coward. For once Bush won a one-on-one on-stage debate faceoff.

Moreover, Bush argued that conservatism is not about protecting the nation from or for any particular ethnic group or religion. Quite the opposite: “We should be a welcoming nation. Our identity is not based on race or ethnicity, it’s based on a set of shared values. That’s American citizenship,” he said. “You can deal with the threat of terror and also recognize that this country should be aspirational.” This was the one debate in the GOP campaign so far in which these obvious points did not seem doomed to be crushed by the unrelenting anger, fear-mongering and nastiness of the other candidates.

Bush’s performance may not be enough to rescue his flailing candidacy. But he showed that one can put in a strong showing in a GOP debate without being a bile-spouting rage machine, and he may peel off some people who are attracted to the other candidates’ confidence rather than their specific, objectionable policies.

NR’s David French agrees that Bush won, although in a much more backhanded fashion:

Tonight’s debate featured by far the best Jeb Bush performance to date. He was funny, quick on his feet, and his policy answers (with the exception of immigration) were spot on. I wanted to cheer when he issued the strongest call yet in this campaign to get the lawyers off the back of the military (an under-appreciated disaster in our war against jihadists). This was the Jeb so many people are excited about when they interact with him in small groups. He’s a good man, and I was glad to see him have this moment. If the votes hold even remotely close to the polls, this might be his last debate. If it is, he went out on a high note.

There’s another debate scheduled for February 6. Regardless of what happens in Iowa, there’s no reason for Bush to quit before the New Hampshire primary. If he doesn’t have a respectable showing, though, he may well pull out before the February 13 debate in South Carolina.

POLITICO’s Glenn Thrush had the best line on it that I’ve seen:  ”Jeb Bush is like a Shakespeare protagonist wandering through a Charlie Sheen sitcom.”