Just when it became safe to keep your shoes and tablets on, a new threat to the friendly skies has emerged: toothpaste. 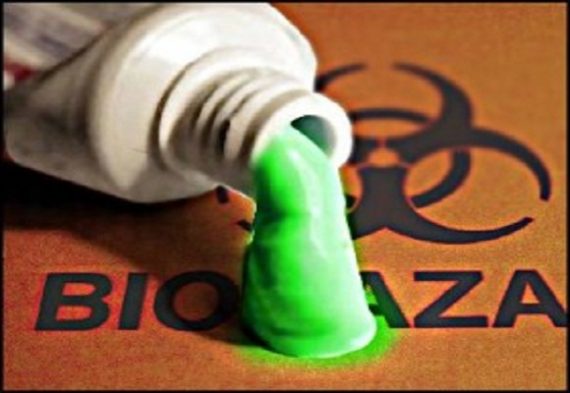 Just when it became safe to keep your shoes and tablets on, a new threat to the friendly skies has emerged: toothpaste.

The Department of Homeland Security has issued a warning to U.S. and some foreign airlines traveling to Russia for the Olympic Games to be on the lookout for toothpaste containers, which some intelligence indicates may actually hold ingredients that could be used to construct a bomb aboard a plane, a senior U.S. official told ABC News.

The official did not provide further details about the warning or the intelligence that prompted it, but an official with the Department of Homeland Security, while declining to discuss the specific warning, said the department “regularly shares relevant information with domestic and international partners, including those associated with international events such as the Sochi Olympics.”

“While we are not aware of a specific threat to the homeland at this time, this routine communication is an important part of our commitment to making sure we meet that priority,” the official said. “As always, our security apparatus includes a number of measures, both seen and unseen, and DHS will continue to adjust security measures to fit an ever evolving threat environment.”

A federal law enforcement source said the information is largely intended for foreign carriers and the generic threat is not directed at the U.S. homeland. The Russian government has been informed, the source said.

Still, Rep. Peter King, Chairman of the House Homeland Security Committee’s Sub-Committee on Counterterrorism and Intelligence, said he has been briefed on the threat and said it should be taken seriously by American travelers, the airlines and officials at the Olympic Games.

“Any type of explosive, concealed explosive, can be extremely damaging,” King, R-N.Y., told CNN. “It could be enough to bring down a plane… This is the type of threat that we’re very concerned about.”

Another federal source familiar with the intelligence said it was also linked to the arrests of two women in France, reported by international media Tuesday. The women, reportedly 23- and 30-years-old, were of Chechen descent.

Security in Sochi, Russia, where the Olympics are scheduled to start Friday, has been high for months due to the threat posed to the Games by Islamic militants in the region. Last month Russian authorities announced no liquids would be allowed on planes to Sochi.

Sochi lies on the Black Sea, just 300 miles away from the heartland of an Islamic militancy in the North Caucasus. Doku Umarov, the leader of the insurgents known to some as Russia’s Osama bin Laden, told his followers last summer they should do what they can to disrupt the Games, which he called a “satanic dance” on the bones of their ancestors.

In the past three months, Russia has suffered three suicide bombings in southern cities attributed to the militants. In January the U.S. State Department urged its citizens traveling to Sochi to be “vigilant and exercise good judgment” during the Games because of the terror threat.

In the U.S., the Transportation Security Administration allows small containers of toothpaste, 3.4 ounces or less, in travelers’ checked luggage.

Actually, the last part is wrong: you are permitted to bring as much toothpaste as you want in your checked luggage; the size limit applies only to carry-on.

Otherwise, this warning is, if you’ll pardon the pun, toothless. What is it that authorities propose to do? Prohibit toothpaste aboard planes, including in cargo holds? That’s simply not reasonable, especially for those who travel constantly. (I suppose hotels would start to adapt, providing tiny tubes of toothpaste as a matter of course as they now do with shampoo and other toiletries. But, still.) Being vigilant about a threat that you can’t do anything about is just alarmist.