Are two parking spaces in Boston really worth $560,000? According to an auction earlier this week they are. 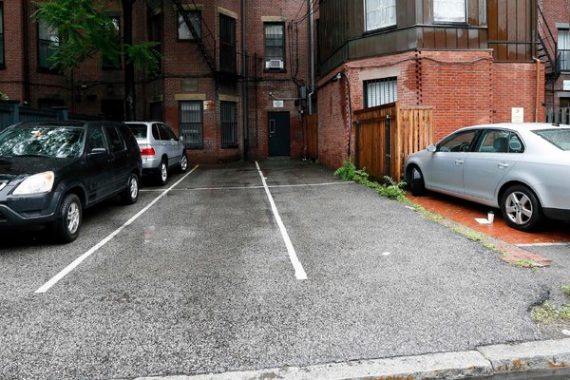 Everyone knows that parking is at a premium in most of America’s major cities, this is especially true in residential areas where street parking is generally the rule rather than the exception. One sign of just how high a premium is placed on parking space was demonstrated this week in Boston:

A slab of asphalt, a couple of white lines, it often comes as part and parcel of a home purchase without too much thought. But in cities like Boston, parking spaces are at a premium, and prices have been climbing for years. In certain neighborhoods, the price of a home can go up $100,000 or $200,000 if parking is included, which it often is not, only adding pressure to the supply and demand crunch that drives prices up further.

The spaces are behind 298 Commonwealth Avenue in the Back Bay, one of the costliest neighborhoods in the city.

“What we’ve seen is the meteoric rise of these prices as the professional class has moved into town,” said Steven Cohen, a Boston-based principal and broker at Keller Williams Realty International. “The Back Bay is almost on a par with Lower Manhattan and Switzerland.”

The winning bidder, Lisa Blumenthal, lives next door in a multimillion-dollar single-family home that already has three parking spots. She told The Boston Globe that the auction was a rare chance to acquire more parking for guests and workers, though she did not expect the bidding to run so high.

“It was a little more heated than I thought it would have been,” she said.

One reason that the price may have gone so high is the fact that this was an auction rather than ordinary sale. Title to the spaces had been seized by the IRS from a  Boston man who owed in excess of $600,000 in back taxes. Under such circumstances, it’s not entirely surprising that the price would skyrocket under the heated atmosphere of an auction. One wonders, though, if Ms. Blumenthal will actually ever get her money back on this purchase. In an open market, it seems unlikely that she’ll ever be able to recoup her investment here, although its possible that a future real estate deal that includes the sale of two additional parking spaces could add some considerable value to her home if and when she sells it.

Some will look at this case and say that $560,000 is an “excessive” price for two parking places, however such an attitude falls into the all too common trap of misunderstanding how value, and supply and demand, work in a market economy. As noted above, off-street parking is in short supply in Boston. As a result, even people who have the means to pay for off-street parking are required to make a choice between parking their car(s) on the street and paying for the privilege of having an off-street, arguably more secure location to park in. Each person is going to value both sides of that equation differently. While you and I may think its insane to spend more than half a million dollars on what amount to two extra parking spaces, Ms. Blumenthal obviously does not. Otherwise, she wouldn’t have agreed to pay that amount in order to have the exclusive right to access to them. While you and I may consider her decision unwise, it’s actually  neither a “right” nor a “wrong” decision. Since each person values things differently, what one person is willing to pay for something will always differ from what others are willing to pay. The free market, and specifically the price system, is simply the outward manifestation of the subjective valuations of millions of individuals. So, the answer to the question “are those parking spots really worth $560,000?” is that this is what they were worth to the purchaser. That’s all that matters.