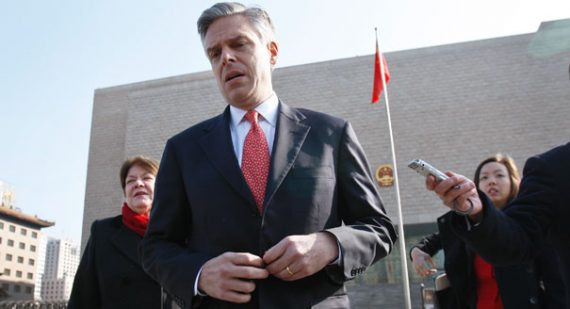 Though he has submitted his resignation, Jon Huntsman is still the U.S. Ambassador to China, which is why his decision to appear at an anti-government rally in Beijing strikes me as a bit of a diplomatic faux pas:

Jon Huntsman was caught on tape at an anti-government protest in China—and quickly left the scene after someone in the crowd noticed the U.S. ambassador’s presence and accused him of wanting to see chaos in the country.

Huntsman, who will resign as U.S. ambassador to China on April 30 and who is considering a bid for the Republican nomination in 2012, was with members of his family in a crowd gathered outside a McDonald’s in a busy Beijing shopping district in a demonstration designed to coincide with pro-democracy protests sweeping the Arab world.

“Hey Mr. Ambassador, what are you doing here?” a member of the crowd asked upon recognizing him, according to a video posted by the China-based blog Shanghiist.

“I’m just here to look around,” said Huntsman, a Mandarin speaker, according to Shanghiist’s translation of the video.

“You want to see chaos in China,” the man said.

A U.S. Embassy spokesperson told the Wall Street Journal that Huntsman was passing by on his way to a museum near Tiananmen Square with his family. The embassy told the Journal he wanted to see what was going on, and circled back later that day to see if it was still ongoing.

It was, at the very least, inappropriate for Huntsman to be present at a rally against the government while serving as Ambassador. I’ll take him at his word that he was just there to see what was happening, but I have to wonder how Americans would feel if a foreign Ambassador just happened to show up at an anti-government rally in Washington, D.C.