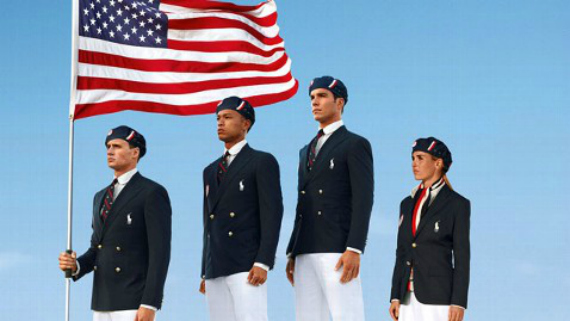 Congress is in full outrage mode because of a report that the uniforms that United States Olympians will wear at the London Olympics were made in China:

WASHINGTON — Uniforms for U.S. Olympic athletes are American red, white and blue — but made in China. That has members of Congress fuming.

Republicans and Democrats railed Thursday about the U.S. Olympic Committee’s decision to dress the U.S. team in Chinese manufactured berets, blazers and pants while the American textile industry struggles economically with many U.S. workers desperate for jobs.

“If they have to wear nothing but a singlet that says USA on it, painted by hand, then that’s what they should wear,” he said, referring to an athletic jersey.

House Democratic Leader Nancy Pelosi told reporters at her weekly news conference that she’s proud of the nation’s Olympic athletes, but “they should be wearing uniforms that are made in America.”

In a statement, the U.S. Olympic Committee defended the choice of designer Ralph Lauren for the clothing at the London Games, which begin later this month.

“Unlike most Olympic teams around the world, the U.S. Olympic Team is privately funded and we’re grateful for the support of our sponsors,” USOC spokesman Patrick Sandusky said in a statement. “We’re proud of our partnership with Ralph Lauren, an iconic American company, and excited to watch America’s finest athletes compete at the upcoming Games in London.”

Ralph Lauren also is dressing the Olympic and Paralympic teams for the closing ceremony and providing casual clothes to be worn around the Olympic Village. Nike has made many of the competition uniforms for the U.S. and outfits for the medal stand.

On Twitter, Sandusky called the outrage over the made-in-China uniforms nonsense. The designer, Sandusky wrote, “financially supports our team. An American company that supports American athletes.”

This strikes me as much ado about nothing. Does it really matter where the uniforms were made, or even who made them? As the USOC says, they are completely privately funded and rely on sponsors and donors for everything. Ralph Lauren is one of America’s premier fashion companies, and they won the bid to supply the uniforms. Seriously, who cares where they were made. In all honesty, I’m more concerned with the question of who thought the design in the above photograph was a good idea.

Nonetheless, it’s a great opportunity for politicians to pontificate, which is what they do best.

On an unrelated note, the spokesman for the USOC certainly does have an unfortunate last name.