The Ukrainian government has said that it has begun military operations in the east in response to rising unrest:

SLOVYANSK, Ukraine — After days of failing to enforce its own ultimatums, the Ukrainian government on Tuesday began what the president called a military operation to confront pro-Russian militants in the east of the country.

The first indication that the operation represented more than just words this time was a modest Ukrainian military checkpoint established on a highway north of the town of Slovyansk, which has been controlled by militants since Saturday.

Witnesses said a dozen armored personnel carriers parked on the highway flew Ukrainian flags about 40 kilometers, or 25 miles, north of the town. There were no credible reports of confrontations with the well-armed and apparently Russian-backed forces in the town.

“On Tuesday morning, in the north of Donetsk region, an antiterrorist operation began,” the Ukrainian speaker of Parliament and acting president, Oleksandr V. Turchynov, told Parliament in the capital, Kiev. “It will be carried out in stages, and responsibly and in a balanced manner. The goal is the defense of citizens of Ukraine.”

Mr. Turchynov, who has asserted in recent days that Russian soldiers have joined the Ukrainian militants who have seized police stations and the entire town of Slovyansk, said the country was confronting a “colossal danger” but offered the assurance that “there will be no civil war.”

In a nod to the wide backing for pro-Russian groups here and in other parts of the east, Mr. Turchynov said that, “along with the Russian special forces and the terrorists there are hundreds of thousands of Ukrainian citizens in the Donbass who were tricked by Russian propaganda.” The Donbass is a coal-mining region that includes the city of Donetsk.

The appearance of the Ukrainian Army in the east of the country and the looming threat of war that it carried sent the Russian stock market down sharply on Tuesday morning. The Russian prime minister, Dmitri A. Medvedev, warned of the risk of bloodshed in Ukraine’s eastern provinces.

Where this goes from here is anyone’s guess. 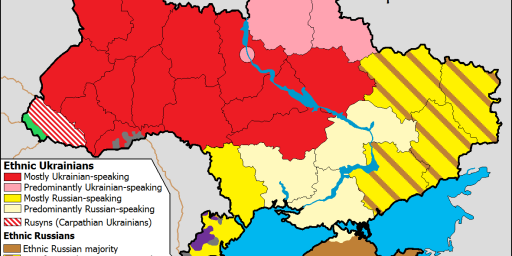