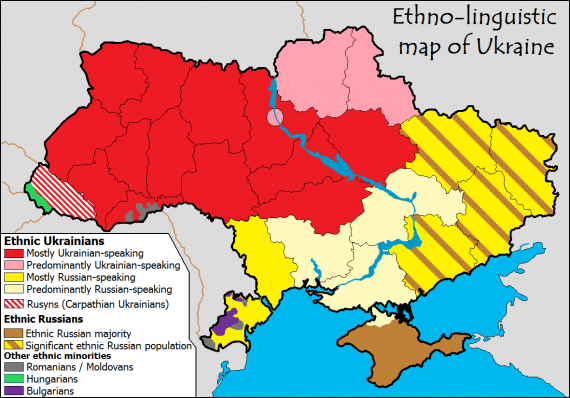 Pro-Russian separatist rebels have downed a Ukrainian military helicopter as fighting in the east continues to flare in the wake of Sunday’s election:

DONETSK, Ukraine — Rebels in eastern Ukraine shot down a military helicopter on Thursday morning, killing a Ukrainian general and 13 other soldiers, as the conflict in the country continued to heat up following last week’s presidential election.

Oleksandr Turchynov, the outgoing president of Ukraine, confirmed the attack in an official statement. He said that rebel forces had used Russian-made, portable surface-to-air missiles to shoot down the helicopter outside Slovyansk, a separatist stronghold.

Fighting between rebel militias and the national army has been intensifying and spreading from cities like Slovyansk toward Donetsk, the regional capital, which has a population of more than a million people. On Monday, more than 50 people were killed in a battle for control of Donetsk’s international airport, which is now in the hands of government troops.

Many of those killed in the fighting were Russian citizens fighting on the rebel side. On Thursday, commanders of the separatist army said they planned to repatriate the bodies of 33 Russians from brigades that were organized in border cities on Russian territory and then traveled to Donetsk. Thirty-three coffins would be trucked to the border on Thursday, a member of the rebel force said.

Infighting broke out among pro-Russian groups as soldiers from the so-called Vostok Batallion, which includes fighters from Russia, cleared the Regional Administration building. Using backhoes and large dump trucks to take away barricades and tires, they routed the rag-tag separatists who had been living there for weeks, and who protested loudly at the intrusion.

One soldier in mismatching camouflage with a bandana tied around his head said they were bringing order to what had been a messy party of “drunkards and alcoholics” who he said had looted large amounts of food and groceries from a Metro supermarket.

A spokesman for the Organization for Security and Cooperation in Europe said on Thursday that the group had been unable to re-establish contact with four monitors it had sent to the Donetsk region. The four, citizens of Turkey, Switzerland, Denmark and Estonia, have been missing since Monday evening.

“With each passing day, we grow more concerned about their safety and well-being,” said the spokesman, Michael Bociurkiw. “But we are confident they will return to Donetsk shortly.”

The disappearance of European monitors is becoming a frequent occurrence in the troubled eastern province, where separatists took over government buildings in a number of towns and cities this spring. A team of 11 monitors lost contact with their base around noon on Wednesday after being stopped at a roadblock outside the town of Marinka; they surfaced again late that evening. Earlier this spring, another team was taken hostage by separatists and held for days before being released.

While the rebels themselves seem to be Ukrainian citizens, it seems quite obvious that they could not have gotten weapons capable of downing a helicopter from just anywhere, and the obvious suspect as the source of supply is, of course, Russia.  Whether the Russians are behind the recent upsurge in violence, though, is an entirely different question. It’s entirely possible that this is a completely organic response by the rebels themselves. The obvious question, though, is what kind of support they might be getting from Russia notwithstanding the fact that Vladimir Putin had said just last week that he would respect the result of the election and claimed, yet again, to be withdrawing Russian troops from the areas near the Ukrainian border.