Michael J. Totten links to a strange column by Sean LaFreniere, who suggests what Don Snow terms “the 51st State Solution” for solving our woes with Old Europe:

If Europe wants to raise its international stature, wishes to unify into a larger body inclusive of all of Western Civilization, and wishes to have a stake in the US presidency. . . then why don’t they apply for admission to the Union? If American and European society are as intertwined as Dale suggests: “In many respects the Atlantic is shrinking and European and American societies are not drifting apart but colliding. The Atlantic is becoming more and more of a common social and political space. [And] more Europeans than ever before speak English, including in France”; then why not “tie the knot” and be done with all this pre-marital bickering?

Other than the fact they have no interest in joining the Union and the fact that they’d outnumber the existing US population and immediately impose their brand of socialism on us, sending our economy into ruin and destroying the United States as we know it, I can’t think of a single reason.

Michael has returned from vacation, by the way, and wants you to visit him to get his traffic back up. 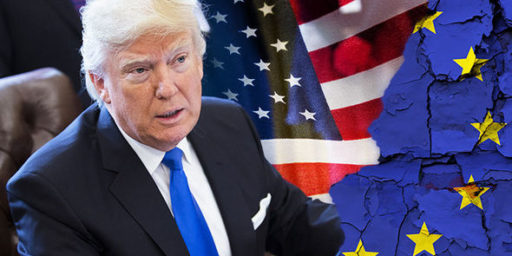 Merkel: Europe Can No Longer Count On The United States