The University of California has joined the list of Plaintiffs suing the Trump Administration over its decision to end DACA. 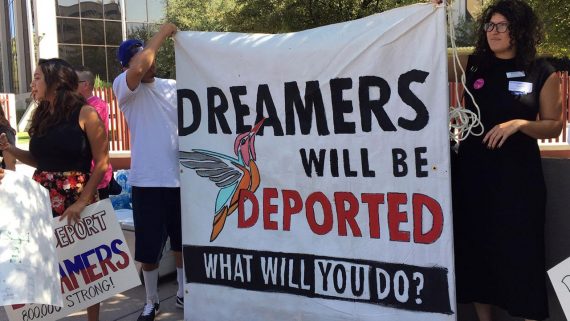 The University of California, led by former Department of Homeland Security Secretary and former Arizona Governor, has joined the growing list of institutions and government entities filing suit against the Trump Administration over the cancellation of the Deferred Action for Childhood Arrivals (DACA) program:

WASHINGTON — As secretary of homeland security in 2012, Janet Napolitano created DACA, the federal program that protected more than 800,000 young, undocumented immigrants from deportation and allowed them to work legally in the United States.

Now, as the president of the sprawling University of California system, she is suing President Trump to save it.

Lawyers for Ms. Napolitano and the school system she leads, which serves 238,000 students across 10 campuses, filed a lawsuit on Friday in federal court accusing Trump officials of violating administrative procedures and constitutional due process requirements by abruptly ending the program, known as Deferred Action for Childhood Arrivals.

Having done so, she says in the lawsuit, Mr. Trump harmed the thousands of undocumented students whose attendance at her universities is made possible by the work permits that they receive through DACA. And she says that ending the program will negatively affect the university system, which stands to lose the academic and cultural benefits those students bring.

“I’m really outraged on behalf of our students, who have done everything that has been asked of them,” Ms. Napolitano said in an interview Thursday night. “Most of them know only the United States as home. To say that they have to be thinking about possible deportation is wrong on the law, inconsistent with our value and bad immigration policy.”

The lawsuit is the among a series of early, high-profile legal challenges to the president’s decision on Tuesday to abruptly end the DACA program, which was aimed at helping undocumented immigrants who had been brought illegally to the United States by their parents when they were children.

It is also the latest attempt by the president’s critics to oppose Mr. Trump’s aggressive immigration policies, using the courts as a cudgel against his travel ban, enhanced immigration enforcement efforts and now, the decision to end the DACA protections.

Ms. Napolitano is uniquely positioned to plead the legal case on behalf of the policy, which she helped to develop for former President Barack Obama during her tenure as his top homeland security official.

It is her signature on the June 15, 2012, document that established the DACA program. In the three-page memorandum, she argues that the nation’s immigration laws were not designed to “remove productive young people to countries where they may not have lived or even speak the language.”

In the five years since she issued the memo, hundreds of thousands of young, undocumented immigrants signed up for legal work permits and DACA’s protection from deportation. The action by the Trump administration on Tuesday will allow some of those immigrants to remain protected for up to two years, but no new applicants to the program will be accepted. And after a six-month implementation period, many of will lose the right to work and will be subject to immediate deportation starting in early March.

Ms. Napolitano’s lawsuit, which was filed in Federal District Court in Northern California, also claims that the decision to rescind her DACA memo was “arbitrary and capricious” because the Trump administration officials did not offer an expansive legal argument justifying their decision.

“If the agency wants to change the rules, they need to explain why,” said Alexander A. Berengaut, a lawyer for Covington & Burling, a law firm that is representing Ms. Napolitano and the university system.

The lawsuit contends that the Trump administration needed to provide a more substantial justification for ending the program because those who enrolled in it made long-term decisions like enrolling in college or getting a loan based on the assumption that it would continue.

And finally, the suit alleges a violation of the constitutional due process rights of DACA enrollees.

Stephen H. Legomsky, a professor at the Washington University School of Law and a former general counsel at the United States Citizenship and Immigration Services, said the university’s legal case is making plausible arguments for the court to consider.

“I definitely think this lawsuit stands a good chance of succeeding,” Mr. Legomsky said. “So much is going to turn on which judge they land.”

Lawyers for Ms. Napolitano are urging the court to issue an injunction preventing the federal government from ending the program.

The suit, which Napolitano filed in her capacity as President of the University of California System that oversees all of the U-C colleges and universities across the Golden State, joins claims already filed on behalf of a DACA recipient in New York City and on behalf of the State of New York and roughly a dozen other Democratic-controlled states. It also raises basically the same arguments that the other lawsuits do. First, the lawsuit claims that the repeal of the program violated the notice and comment procedures required by the Administrative Procedures Act, a Federal law that generally speaking requires the Executive Branch to follow when acting or repealing most, but not necessarily all, regulations issued by the various Executive Branch departments. This was the ground upon which Texas and a group of other states were successful in getting a stay imposed by a Federal District Court Judge and sustained by the Fifth Circuit Court of Appeals and the Supreme Court when they sued the Obama Administration over the much broader Deferred Action for Parents of Americans (DAPA) program. Second, the lawsuit claims that the decision to end DAPA violates the Due Process Clause in that it seeks to deprive both the University of California system and the students it represents of the benefits received under the DACA program without due process and without regard to their recognized Constitutional rights. Unlike the other lawsuits, this Complaint does not raise any claims under the Equal Protection Clause.

As I said with respect to each of the other lawsuits, while I disagree strongly with the President’s decision to end the DACA program as a policy matter, I have significant doubts about whether these legal challenges can or will succeed in a court of law. Absent a showing that the Administration has acted outside of the law, as occurred in the lawsuits challenging the Muslim Travel Ban, a legal challenge to a President’s decision to enact or rescind an Executive Order in an area that falls within the Executive Branch’s Constitutional prerogatives or one where it has been granted discretion via a law passed by Congress, are not usually successful. The President’s authority to sign such orders and exercise his authority in this matter is long-standing and well established.  The claims under the APA could have some merit, but any claim that arises under that law could be easily cured by the Administration simply deciding or agreeing to follow procedures required under the APA and then enact the repeal announced last Tuesday. Additionally, there are interesting questions that would be raised if a Court were to find that DACA as originally enacted by the Obama Administration was not legally supportable for reasons other than the failure to abide by the APA. If that were to happen, then it would arguably mean that the entire case is moot since it would mean that DACA was not legally justifiable to begin with.

In any case, as with the other two cases, it will likely be some time before there are any future legal developments. Since the program isn’t scheduled to end until March of next year, there’s no need for the Court to enter an immediate injunction against its implementation. Additionally, if Congress does somehow manage to act on this issue before then and codify either DACA or the Dream Act into law, then the lawsuits would be unnecessary. We’ll just have to wait and see.

Here’s the Complaint in the University of California case:

Regents of the University of California Et Al v. Dept of Homeland Security Et Al by Doug Mataconis on Scribd