Not only is the US outspending all our allies and competitors combined in real dollars on defense, we're doing so in terms of GDP as well.

Commenter John Personna passes along a Reuters blog post by Cate Long titled “It’s the military, stupid.” I commend it to you in full but the upshot is a comparison of two heat maps based on World Bank data:

Total taxes as a percentage of a country’s GDP 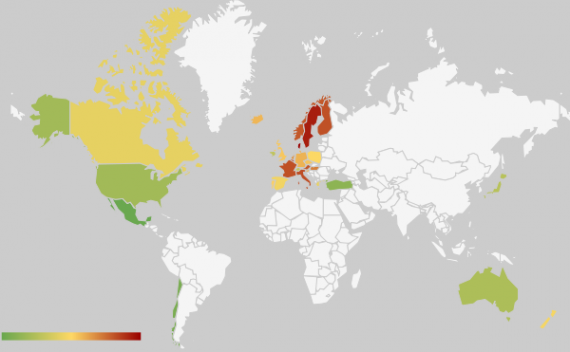 Military spending as a percentage of a country’s GDP 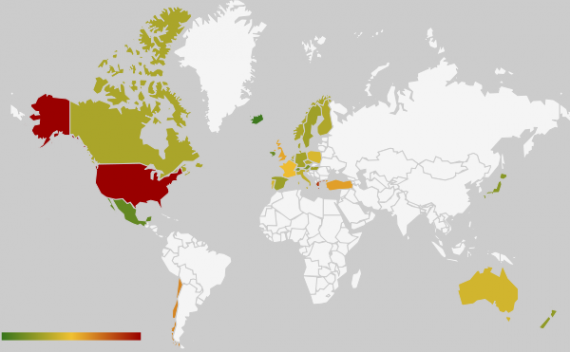 America could be much more competitive, balance the budget and reduce the national debt if we brought our military expenditures in line with our global competitors. This would result in hundreds of billions of dollars in annual savings. For some odd reason the Chamber of Commerce prefers to insist that social entitlements are the sole cause of the federal deficit. Let me just suggest to the Chamber, “It’s the military, stupid.”

Now, I’m not sure how useful spending as a percentage of GDP is as a gauge of prudent defense spending. While I’m skeptical of the degree to which the United States is committed to foreign occupations, I nonetheless believe we have global interests in a way few do. Further, I’m deeply concerned about how little our traditional NATO allies–particularly the UK, France, and Germany–are spending on defense.

I played around a little with the World Bank data, keeping only the five most recent years and adding a column for arithmetic mean. Here are the top 20 countries in the world for that period: 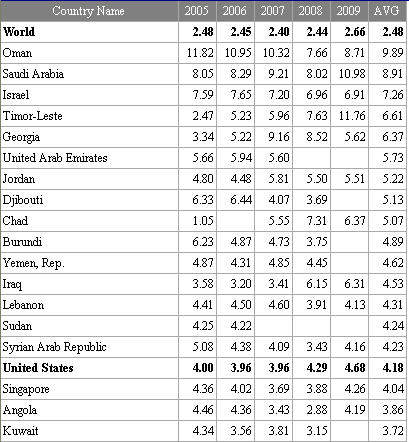 Then again, everyone above us on the list is a basket case and/or actually at war. None of the major allies or competitors makes the top 20. Some selected others:

So, not only are we outspending all our allies and competitors combined in real dollars, we’re doing so in terms of GDP as well. China, the bogeyman cited as the most likely peer competitor over the last 20 years, is spending less than the world average.

Again, I’m not sure this tells us anything definitive. It doesn’t necessarily mean, for example, that we should cut defense spending down to 2.48% of GDP. We need a strategic assessment of our diplomatic and political goals to know that. But, given that our economic might was the cause of our rise to number one status in the world a century ago and that we’re losing that lead, it would seem to be another data point in the argument that defense spending is a part of the answre.

The End of China’s Growth?