Mike Pence's night at the theater included a message from the cast. Good for them. 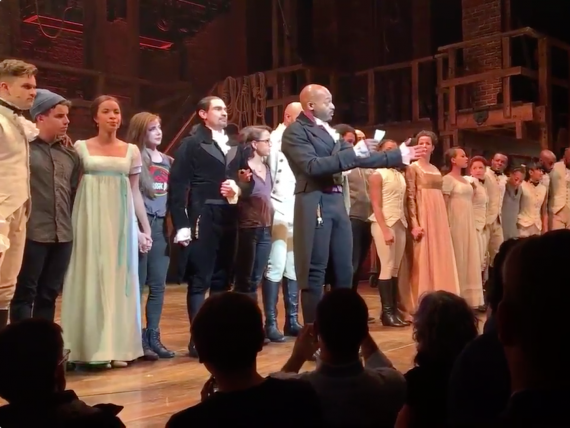 Vice-President-Elect Mike Pence was in New York City yesterday for transition team meetings and other business and ended up going out with his family to see the high-demand Broadway musical ‘Hamilton.’ Not surprisingly, the evening didn’t go off without incident:

“Hamilton,” the hit Broadway musical about colonial rebels shaping the future of an unformed country, took an even more political turn at the end of its performance on Friday night.

With Vice President-elect Mike Pence attending the show, the cast used the opportunity to make a statement emphasizing the need for the new administration of President-elect Donald J. Trump, a Republican, to work on behalf of all Americans.

It was a deeply felt and altogether rare appeal from the stage of a Broadway show — and it drew a surprisingly sharp rebuke from Mr. Trump on Saturday morning. The president-elect tweeted that the “Hamilton” cast had “harassed” Mr. Pence by making the statement and had been “very rude.”

“Apologize!” Mr. Trump wrote at the end of one of two tweets on the matter.

As the play ended, the actor who played Aaron Burr, Brandon Victor Dixon, acknowledged that Mr. Pence was in the audience, thanked him for attending and added, “We hope you will hear us out.”

“We, sir — we — are the diverse America who are alarmed and anxious that your new administration will not protect us, our planet, our children, our parents, or defend us and uphold our inalienable rights,” he said. “We truly hope that this show has inspired you to uphold our American values and to work on behalf of all of us.”

The audience broke out in enthusiastic applause and cheers.

Mr. Pence was leaving as Mr. Dixon began to read the statement from the stage. A show spokesman said that Mr. Pence stood in the hallway outside the entrance to the auditorium and heard the full remarks.

Mr. Pence made no comment and was photographed smiling as he left the theater.

Mr. Pence had been seated in the center orchestra section, prominently visible to audience members. He appeared engaged throughout the show and applauded after most of its numbers, audience members near him said.

When Mr. Pence entered the Richard Rodgers Theater in Manhattan, he was greeted with a mix of clapping and booing, according to theatergoers who posted on Twitter.

The audience gave a standing ovation during the play at the line, “Immigrants, we get the job done,” one theatergoer, Christy Colburn, wrote on Twitter.

She added: “Crowd went NUTS at King George’s lines ‘when people say they hate you’ & ‘do you know how hard it is to lead?’ He had to stop the song.”

The statement that Mr. Dixon read was written by the show’s creator, Lin-Manuel Miranda, its director, Thomas Kail, and the lead producer, Jeffrey Seller, with input from cast members, Mr. Seller said.

“We had to ask ourselves, how do we cope with this?” Mr. Seller said. “Our cast could barely go on stage the day after the election. The election was painful and crushing to all of us here. We all struggled with what was the appropriate and respectful and proper response. We are honored that Mr. Pence attended the show, and we had to use this opportunity to express our feelings.”

Mr. Seller said that there was some discussion about whether it was appropriate to inject a political statement into the night, and that those involved decided to wait until the end of the performance. He said no cast members had skipped the performance to protest Mr. Pence’s appearance.

Mr. Trump has not seen “Hamilton” or inquired about tickets, Mr. Seller said, adding that the president-elect would be “welcomed to attend.”

The show’s politics — particularly its celebration of diversity and of the critical role immigrants played in the American Revolution and the early republic — stand in sharp contrast to some of the harsh language about immigrants that Mr. Trump used during the campaign and his focus on appealing to white men with statements about returning America to “the good old days.”

One of the most acclaimed Broadway musicals in years, “Hamilton” has been especially celebrated by liberals for its resonant, provocative portrayal of America as a nation of immigrants — particularly with its casting of Hispanic or black actors in the roles of Alexander Hamilton, George Washington, Thomas Jefferson and other founding fathers.

Here’s the video of what happened:

Donald Trump, of course, had his own reaction:

Our wonderful future V.P. Mike Pence was harassed last night at the theater by the cast of Hamilton, cameras blazing.This should not happen!

The Theater must always be a safe and special place.The cast of Hamilton was very rude last night to a very good man, Mike Pence. Apologize!

To which the actor who plays Aaron Burr in the musical, who is the one who read the statement in the video above, responded:

@realDonaldTrump conversation is not harassment sir. And I appreciate @mike_pence for stopping to listen.

Depending on where you sit on the political spectrum, the reaction to this has been entirely predictable. For Trump supporters and even many on the right who ostensibly didn’t support Trump in this election, what happened here was ‘rude’ or ‘outrageous’ and disrespectful toward the Vice-President-Elect and his family. To many on the left, speaking out to a member of the incoming Administration is the highest form of patriotism and the cast was right to do so when they had the opportunity. Of course, were the roles reversed and it was a Democratic politician getting lectured in public like this, it’s likely that the reaction from each side of the political spectrum would likewise be reversed. From my perspective, it seems clear that the cast here didn’t do anything disrespectful, weren’t rude to Pence or his family, and certainly didn’t do anything outrageous. Had they interrupted the performance to call Pence out, it would perhaps be a difference story but the fact that they waited until the end of the performance demonstrates that they wanted Pence to see the show and the message it conveys. The statement itself was calm, respectful, and not personally insulting. Additionally, it was reported elsewhere that a cast member asked the audience to refrain from booing Pence as had happened when Pence arrived shortly before the start of the performance. As I said, if the cast had interrupted the performance or put a spotlight on Pence and his family to single them out, then I would possibly buy into the idea that they were being in any way “rude.” Instead, what we have here is a respectful statement to an incoming Vice-President from people who have obvious disagreements with him and the President-Elect. This is America at it’s best, and the criticism is entirely unwarranted.

In talking about this incident, it’s also worth noting two other important points. First, although Hamilton is a Broadway musical meant as entertainment, it also carries with it explicitly political messages about issues that lead back to the founding of the United States and the role of immigrants in the country. That’s one reason why the writer, director, and producers of the show consciously chose to cast minority actors to play the role of men such as Alexander Hamilton, Aaron Burr, and Thomas Jefferson. Like much art, the play is meant to speak to contemporary issues as much as it is meant to be about the nation’s first Secretary of the Treasury. Given this, it isn’t surprising that the cast would speak out when a politician representing a ticket that seemingly supports policies that run counter to the nation’s long-run openness to immigrants is in the cast. Secondly, it’s worth noting that the actor currently playing the lead role in the musical, along with many members of the cast no doubt, is a gay man who has spoken out about LBGT issues many times in the past. Pence, on the other hand, is a religious conservative who continues to oppose marriage equality notwithstanding the Supreme Court’s decision in Obergefell and who has in the past advocated for so-called “gay conversion therapy,” which advocates the use of electro-shock therapy and other bizarre means to “cure” people of the “disease” of homosexuality. While this wasn’t mentioned in the statement read from the stage, it was likely in the mind of the people on that stage given that this is an issue that got a lot of play on the left during the election. Given that, it’s hardly surprising that they would not let the opportunity to speak to a person like Pence pass without saying something. On a final note, it’s particularly hypocritical for Donald Trump to criticize anyone for making statements to people they disagree with. Throughout his campaign for President, Trump made derogatory, insulting, and veiled with the implication of violence comments and insults toward critics, protesters at his rallies, and the news media as a whole. For him to criticize the cast for an entirely respectful statement such as this as particularly audacious.

As I said, had the cast interrupted the performance or otherwise singled Pence and his family out then it arguably would have been rude or inappropriate. They did not do that, they did not insult Pence or Trump, and they were not confrontational. That strikes me as being American free speech at its best.