Washington said farewell to George H.W. Bush today in a service that both remembered his spirit and his heroism, and stands as a sharp rebuke to what politics has been reduced to in America today. 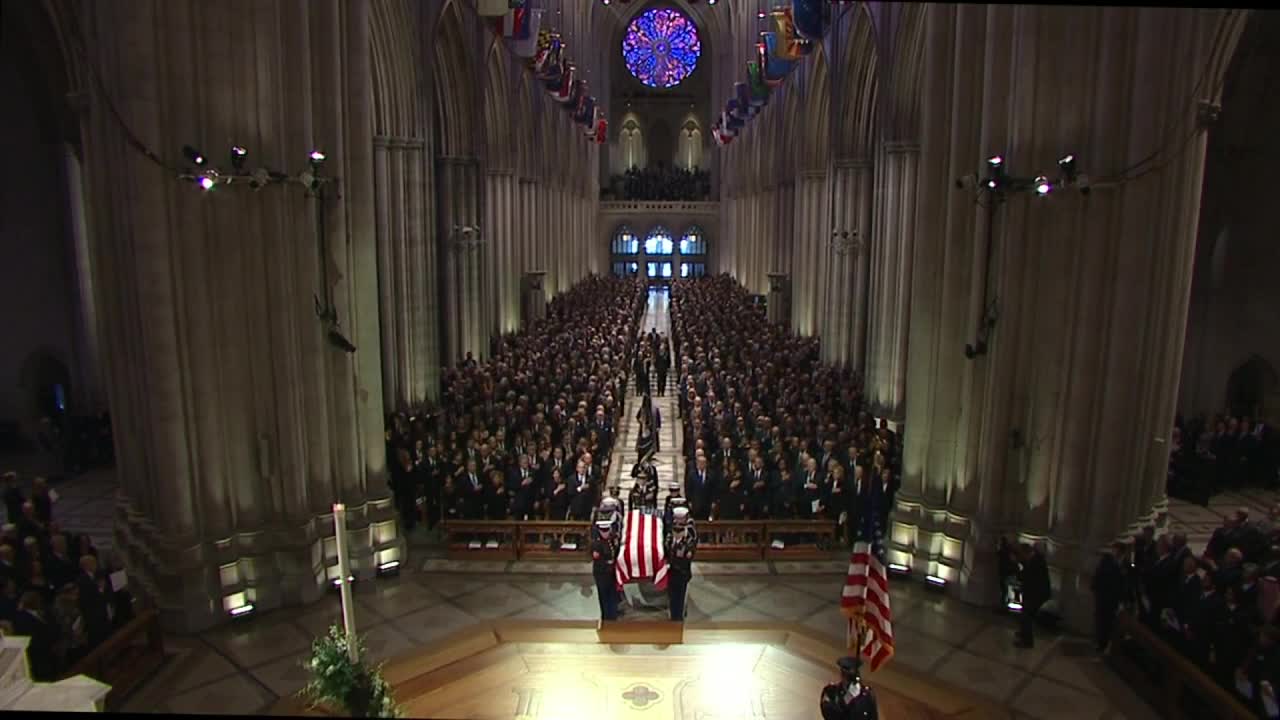 Friends, family, and much of official Washington representing both the era in which he served and the new and far more complicated era we find ourselves in today gathered this morning in Washington National Cathedral to pay tribute to the memory of the 41st President of the United States:

WASHINGTON — The nation bade farewell on Wednesday to George Herbert Walker Bush, the patriarch of one of the most consequential political dynasties of modern times and the president who presided over the end of the Cold War and the beginning of a new era of American dominance in the world.

As bells tolled and choirs sang and an honor guard accompanied the coffin, the nation’s 41st president was remembered as a “kinder and gentler” leader at a tumultuous moment whose fortitude steered the country through storms at home and abroad and whose essential decency set a standard for others to meet.

“When the history books are written,” his son, former President George W. Bush, said in a eulogy at Washington National Cathedral, “they will say that George H.W. Bush was a great president of the United States, a diplomat of unmatched skill, a commander in chief of formidable accomplishments and a gentleman who executed the duties of his office with dignity and honor.”

Mr. Bush, like his father an emotional man given to tearing up over family, struggled to make it through his eulogy, his eyes watery, his face etched with emotion. He held on until the very end, when he choked up as he called the former president “the best father a son or daughter could ever have.”

President Trump joined all the living former presidents as well as foreign leaders, lawmakers, Supreme Court justices and diplomats at the service but in a nod to tensions with the Bush family he had no speaking role. There was less of an overt sense of rebuke to Mr. Trump than there was at the funeral for Senator John McCain in September, but the unspoken contrasts between the former and current presidents were hard to miss.

While speakers talked about Mr. Bush’s civility, his commitment to the institutions of government and his faith in alliances, Mr. Trump was sitting just feet away, his arms sometimes crossed, almost as if in defiance. Without directly saying so, the speakers pushed back against Mr. Trump’s mockery of the former president’s volunteerism slogan “a thousand points of light” during campaign rallies this year.

“To us,” the younger Mr. Bush said, “his was the brightest of the thousand points of light.”

The elder Mr. Bush died on Friday at age 94 after years of struggling with a form of Parkinson’s disease. His coffin, draped in a flag, was headed after the service to Joint Base Andrews outside Washington, where it will be loaded aboard one of the blue-and-white presidential jets for a final flight home to Texas.

The state funeral served as a milestone in the life of a country that has moved beyond the type of politics Mr. Bush preached and, with notable exceptions, practiced. The moments of bipartisan compromise that marked his presidency feel alien as the politics of anger and division dominate Washington and the country.

As with any funeral, Mr. Bush was venerated in death in ways he was not always in life. During his time in politics, he was excoriated by conservatives for breaking his “read my lips” vow not to raise taxes, by liberals for his racially charged campaign tactics and by many across the spectrum for his inattention to the growing economic troubles at home. He garnered just 37 percent of the vote in seeking re-election in 1992, the lowest of any incumbent president in 80 years.

But with the passage of time, Mr. Bush has become one of the most admired occupants of the Oval Office, often described as the best one-term president, at least in modern times. He helped bring the Cold War to a peaceful end, paved the way for the reunification of Germany, launched the Gulf War to expel Iraqi invaders from Kuwait and bolstered America’s standing around the world.

Even his broken tax pledge was hailed on Wednesday as an example of political courage, when he put aside ideology and expedience to cut a bipartisan agreement to reduce the deficit. He was remembered as well for signing landmark legislation on civil rights and the environment, including the Americans With Disabilities Act.

“I believe it will be said that no occupant of the Oval Office was more courageous, more principled or more honorable than George Herbert Walker Bush,” said former Prime Minister Brian Mulroney of Canada, a friend of the former president’s who was asked to deliver a tribute.

“Abraham Lincoln’s better angels of our nature and George H.W. Bush’s thousand points of light are companion verses in America’s national hymn,” Mr. Meacham said. “For Lincoln and Bush both called on us to choose the right over the convenient, to hope rather than to fear and to heed not our worst impulses but our best instincts.”

The four tributes that made up the former President’s eulogy fit together to paint as complete a picture as possible of a man who lived an extraordinary life of service. Historian Jon Mecham, who wrote an excellent biography of the former President that was released last year, began by telling the now-familiar story of the day that Bush was shot out of the sky and also revealed something that Bush himself never spoke about publicly, namely the extent to which survival on that day in 1944 went on to shape the rest of his life and his decision to enter the world of politics and public service as a way of giving back for the fact that his life had been spared while the rest of his crew never managed to make it off the plane. Former Canadian Prime Minister Brian Mulroney, who served in office for most of the time that Bush was President, put into context Bush’s role as a statesman at perhaps the most perilous and significant point in world history since the end of the Second World War and the role he played in such events as assembling the coalition that helped push Iraq out of Kuwait in 1991 and to reunify Germany in a manner that Europe and the Soviets could be comfortable with. Senator Alan Simpson, who proved yet again that he still maintains the wit and sense of humor that marked his career in Washington as he spoke about Bush as a friend even in the darkest of times. Finally, former President George W. Bush spoke about Bush as a father, husband, and Grandfather. and perhaps much to his own surprise managed to keep his emotions in check until the very end notwithstanding the fact that it has been apparent at several points this week that the burden of grief was weighing heavily upon him.

Here are the videos of the four eulogies:

Unlike the last public funeral at the National Cathedral, for John McCain at the end of August, there was not any readily apparent political statement from the events, no doubt a reflection of Bush himself. Nonetheless, there was definite awkwardness on display in the front row of the Cathedral where President Trump and First Lady Melania Trump sat along with President and Mrs. Obama, President and Secretary Clinton, and President and Mrs. Carter. While the Trump’s did exchange pleasantries of some sort with former President Obama and his wife, neither the Clintons, the Carters, nor Trump made any real effort to acknowledge each other’s existence. Indeed, during the few times that the camera did focus on him President Trump seemed uncomfortable and out of his element as the praises of the former President were made during the course of the service. In any event, Trump’s presence did not appear to be disruptive and the focus remained where it should be, on the life and legacy of a hero, statesman, and patriarch of a family that has devoted itself to public service.

Tomorrow, Bush will be remembered by his fellow Texans at the same church from which his late wife was buried just eight months ago. After that, he will be interred on the grounds of his Presidential Library on the campus of Texas A&M University alongside Barbara and their daughter Robin, who died of leukemia at the age of 3 in 1953. At that point, we will reach what might be referred to as the end of an era in American politics. The Republican Party that George H.W Bush represented is long gone, and what is left in its place is so foreign that Bush himself ended up voting for the wife of the man who had beaten him in 1992 in the 2016 Presidential election. Gone as well is the spirit of bipartisanship that marked both his Presidency and that of the President for whom he had served as Vice-President. What’s left behind is a hideous mess. One would hope that as with the memorials for John McCain just a few months ago, the passing of George H.W Bush would lead to reassessment and change, but that’s not likely to happen. Instead, we’re likely to see the same Washington politicians who were gathered in the National Cathedral today return to form when they wake up tomorrow morning. That’s perhaps the saddest thing of all.

You can watch C-Span’s full coverage of the service here: 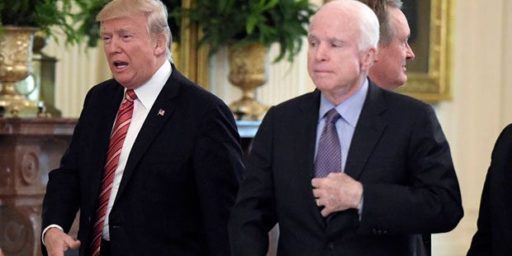